O'Reilly Smacks Down Maher for Claiming Anti-Obama Sentiment is Racist 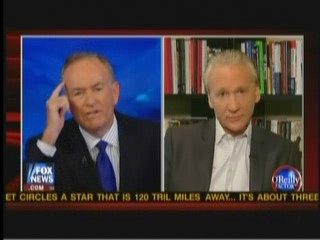 In the first part of his much-anticipated interview with the "Real Time" host, O'Reilly asked Maher's opinion on why the public seems to have soured on the President.

After blaming Obama's woes on everyone but Obama himself, Maher said, "Of course a lot of it is racially..."

Maher didn't get a chance to finish this pathetic thought for O'Reilly cut him off mid-sentence (video follows with transcript and commentary):

BILL O'REILLY, HOST: But there's something more in play here, I think, and I just wondered if you had noticed anything about the President's presentation or the way he goes about his job that you might point to?

BILL MAHER: Well, obviously, people think he's a little bloodless. I happen to like that in a president. I like a president that uses his brain and not his faith or his heart or his gut as the former president did. I kind of like that in our president. But, you know, again, they don't brag about their accomplishments and when you downplay the economy, all of the dissatisfaction with him is about the economy. Of course a lot of it is racially --

O'REILLY: You think it's racially?

MAHER: Almost all of it.

MAHER: Oh, so you don't think it's racially involved at all?

O'REILLY: Of course not. You know, he was elected by 53% of the public and when he took office, his approval was over 70. Come on. Come on!

Indeed. In fact, Obama's favorability rating was closer to 80 shortly before he was inaugurated. Do folks like Maher think the nation suddenly turned more racist than it was in January 2009?

Regardless of the answer, Maher wasn't done saying foolish things, and O'Reilly wasn't done smacking him down:

MAHER: But Bill, but Bill, just for example, I mean, the Teabaggers, they're the ones that are so upset about the debt. Most of the debt came from Bush. That's just a fact. And under Bush, Cheney said it, deficits don't matter. Nobody was angry about the deficit when it was President Bush.

O'REILLY: Because they didn't know about it. Look, President Obama has spent more money --

MAHER: They didn't know about it?

O'REILLY: No. They didn't. It wasn't a big issue as it is now. He's the biggest spending president in the history of the republic, Maher. You got to know that, man!

O'REILLY: No, Obama is the biggest -- his budget is bigger than Bush's budget.

MAHER: Most -- most of the money that has been sent has been trying to dig us out of the hole that Bush put us in.

As for Bush being a bigger spender than Obama, Maher was once again proving how being a liberal in America today means having to ignore facts whenever they interfere with your agenda.

Of course, with the various bailouts that occurred in '08 and '09, the government spent far more than originally anticipated. But at $3.5 trillion, it was still less than what Obama will spend in FY '10.

Yet that's only part of the story, for Obama not only had a hand in creating Bush's last budget, he also was directly involved in all the additions to it.

On March 14, 2008, then Sen. Obama voted in favor of the 2009 budget. The 51-44 vote that morning was strongly along party lines with only two Republicans saying "Yes." When the final conference report was presented to the House on June 5, not one Republican voted for it.

But that's just the beginning, for on October 1, 2008, Obama, Biden, and Clinton voted in favor of the $700 billion Troubled Assets Relief Program designed to prevent teetering financial institutions from completely destroying the economy.

And what about the $787 billion stimulus bill that passed in February 2009 with just three Republican votes? Wouldn't Obama only be blameless if he vetoed it and was later overridden?

Of course, he didn't, and, instead signed it into law on February 17. Nor did he veto the $410 billion of additional spending Congress sent to his desk three weeks later.

Add it all up, and Obama approved every penny spent in fiscal 2009 either via his votes in the Senate or his signature as President. As such, Maher's claim that Bush was a bigger spender than Obama is 100 percent false.

But that shouldn't be too surprising to NewsBusters readers, as we have regularly pointed out when Maher plays fast and loose with the facts.

Recall that when he did this in front of George Will on ABC's "This Week" in May, he ended up looking like quite the fool. PolitiFact even found what he said that Sunday false.

Maybe the PF folks will look into Wednesday's misstatement as well.