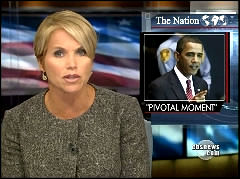 When Katie Couric and the folks at CBS start doubting what the Administration says about how effective February's economic stimulus package was, you know President Obama is in trouble.

Consider that on Thursday's CBS "Evening News," Chip Reid began a segment with the following startling statement about a jobs report card to be released by the White House Friday:

Well, Katie, that report is going to claim that the stimulus has already created or saved hundreds of thousands of jobs, but if the administration`s first effort at counting stimulus jobs is any guide, tomorrow`s numbers could be hard to believe.

Readers are advised to make sure youngsters are out of the room, for watching Katie and the Gang say the White House might be fudging numbers could be way too frightening for minors (video embedded below the fold with transcript, h/t Terri Green, file photo):

KATIE COURIC, HOST: Now let`s get back to that $787 billion stimulus Anthony mentioned. Earlier this year, the president claimed it would create or save three million jobs. There are some questions about how many it may have created so far. Chip Reid is at the White House tonight. And, Chip, I know the administration is putting out a jobs report card tomorrow. What can you can tell us about that?

CHIP REID, CBS CORRESPONDENT: Well, Katie, that report is going to claim that the stimulus has already created or saved hundreds of thousands of jobs, but if the administration`s first effort at counting stimulus jobs is any guide, tomorrow`s numbers could be hard to believe.

REID: At a small college in Georgia, $100,000 in stimulus funds paid for trucks for students to practice for commercial driver`s licenses. Another $100,000 went for a modular classroom. The school reported to the government that 280 jobs were created.

In reality, not even close. That`s the number of students who benefited. It has nothing to do with jobs.

In Cocoa, Florida, a childcare center reported 129 jobs created by a stimulus grant. In fact, no jobs were created. The money was really used to increase the compensation and benefits of 129 existing employees.

Overall, it turns out the administration`s initial stimulus jobs report contained hundreds of errors as first reported by the Associated Press. Critics say if the kinds of errors found in that earlier report are repeated in Friday`s much more extensive job creation survey, it won`t be worth the paper it`s printed on.

CRAIG JENNINGS: We have, I think, a rough estimate at best. And at worst, these numbers are next to useless.

REID: The White House says the errors have already been corrected, that tomorrow`s jobs report has been double- and triple-checked for weeks, and that it will give an accurate, detailed look at the early success of the stimulus.

Republicans in Congress, though, predict the report will be a world- class example of government obfuscation.

REP. JOHN BOEHNER (R), OHIO: There is no factual way of determining how many jobs were saved or created.

REID: Those Republican critics also say they don`t understand how some stimulus projects will create any jobs. For example, half a million dollars to study social networks like FaceBook, and $219,000 to study the sex lives of female college freshmen. Katie.

Makes you wonder if White House communications director Anita Dunn is going to file a complaint with CBS.

After all, she didn't think it was right for Fox News's Chris Wallace to fact check the Adminstration.

Why should Katie and crew get to do it?