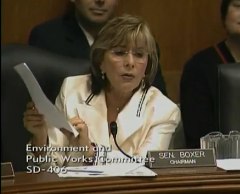 On Thursday, NewsBusters asked if the media would notice Sen. Barbara Boxer (D-Cal.) being called out by the CEO of the National Black Chamber of Commerce for her racist and condescending treatment of him during a Senate hearing.

Such seemed a particularly important question as this disgraceful event occurred on the 100th anniversary of the NAACP.

Yet, according to LexisNexis, not one major media outlet other than FNC thought it was at all newsworthy that Harry Alford called Boxer "God-awful" for pitting the opinions of other black organizations against his.

You think this would have been boycotted, especially on the 100th anniversary of the NAACP, if Boxer had an "R" next to her name instead of a "D"?

For those interested in hearing more from Alford, he was interviewed by LA radio host and Sarah Palin documentarian John Ziegler Friday, and made some comments about Boxer I guarantee media will also ignore (video embedded below the fold, h/t Hot Air):

Now, imagine for a moment that the ranking Republican at that hearing, Sen. James Inhofe (R-Okla.), had been accused of racism by Alford.

Do you think this would have gotten media's attention?

In fact, as it occurred on the same day President Obama was speaking at the gala for the 100th anniversary of the NAACP, such remarks by a Republican would have been used as an example of how racism is still a problem in our nation.

I guess media didn't want to use what happened between Alford and Boxer to demonstrate such.