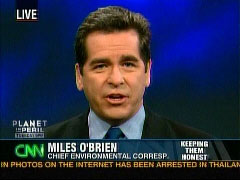 Climate alarmists won't have Miles O'Brien to spread global warming hysteria on CNN anymore as the network has decided to eliminate its science and technology unit.

As reported by the Atlanta Journal-Constitution Thursday, this "will result in the loss of seven jobs including veteran space correspondent Miles O’Brien."

The decision to do away with science-and-tech reporting as a standalone unit is an editorial one, not an economic one, the media company said. Instead, those stories will be integrated into other parts of the network, CNN spokeswoman Christa Robinson said. For example, the bulk of the network’s environmental coverage is part of Anderson Cooper 360’s “Planet in Peril” occasional series.

The New York Times' Andrew Revkin views this as a growing trend in the industry:

Newspaper coverage of science outside of health and wellness is steadily eroding. Even here at The Times, where the Science Times section celebrated its 25th anniversary in 2003 and management has always supported strong science coverage, we (like everyone in print media) are doing ever more with less.

Of course, the cynic in me wonders if this move has anything to do with the decreased interest in global warming by the public as a result of the economic downturn.

Maybe more importantly, as we have now gone a full ten years with lower temperatures than the highly-reported peak in 1998 -- it's almost a certainty that 2008 will show a continuation of a global cooling trend -- one has to wonder if CNN is jumping off the global warming bandwagon.

After all, O'Brien represented one of that network's staunchest alarmists, and has been the subject of many NewsBusters articles. Some of my favorites include O'Brien:

Needless to say, O'Brien has been the source of a lot of guffaws and chuckles for climate realists the world over.

As such, we wish him well, and hope that wherever he lands, he keeps in touch so that we can continue to be entertained by his lapses in reason.