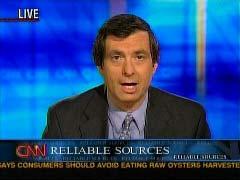 Has the media's love affair with Barack Obama gone too far?

CNN's Howard Kurtz seems to think so, for on Sunday's "Reliable Sources," the Washington Post columnist strongly took issue with how press outlets reported last week's news that the Democrat presidential nominee was going back on a campaign promise to accept public funds:

And all these liberal commentators who have always supported campaign finance reform, getting big money out of politics, many of them are defending Obama. And I have to think the press is cutting him a break here.

Better still, as the following partial transcript demonstrates, getting guests Lola Ogunnaike of CNN, Julie Mason of the Houston Chronicle, and Anne Kornblut of the Washington Post to agree with him was like pulling teeth (file photo right):


HOWARD KURTZ, HOST: Barack Obama did a 180 off the high board this week. He changed his position on accepting public financing during the fall campaign. Instead, he's going to go out and raise as much money as he possibly can. Not everybody emphasized that to the same degree. Let's watch some of the coverage.

RUSS MITCHELL, CBS NEWS: Barack Obama abandoned a campaign pledge today when he announced he will forgo federal funding worth some $84 million.

CHARLES GIBSON, ABC NEWS: This is a direction contradiction to what Barack Obama said early on in the primary campaign.

KURTZ: Anne Kornblut, this was a total abandonment of a promise that Senator Obama had made repeatedly, and not everybody played it up to the extent that Charlie Gibson just did. In fact, some analysts played it down or just gave it a paragraph. Why isn't the flip-flop the story?

ANNE KORNBLUT, WASHINGTON POST: Well, it was for a couple of days in some news outlets, certainly in the newspapers.

KURTZ: One day at most.

KORNBLUT: It's not the sexiest topic in the world. It's a lot easier to generate interest talking about a dress or something superficial. It involves money, it involves math. That's not a reporter's specialty, for the most part. And there is a sense, rightly or wrongly, that voters don't care about the arcane rules of campaign finance.

Now, I wonder in a year when somebody who's -- two people actually run as sort of antiestablishment reformers, whether voters really do care, but at least that was the treatment that it seemed to be given.

Imagine that: it's not the sexiest topic in the world so voters don't really care. Now THAT'S good journalism dontcha think? But there was more:

KURTZ: Yes, although I would argue it's not arcane at all in the sense that, you know, this could be the ball game. I mean, John McCain, who is taking public financing, is going to have $84 million to spend this fall, and Barack Obama could have $300 million, even $400 million. And all these liberal commentators who have always supported campaign finance reform, getting big money out of politics, many of them are defending Obama. And I have to think the press is cutting him a break here.

JULIE MASON, HOUSTON CHRONICLE: Right, it's true. And, well, like Anne said, it's not a very sexy issue. And to explain it, you have to get into the weeds about the pros and cons of campaign finance. And I think when we understand covering politics that the economy is the big issue that everyone cares about, and what are you going to do for me about gas prices, getting into the weeds on campaign finance seems a little beside the point.

MASON: Well, I think people feel like as long as they don't have to pay for it, they don't really care.

Wow. So I guess journalists should stop bringing up issues that don't cost voters money! But there was still more. Pay particular attention to this next exchange:

KURTZ: Lola, John Kerry four years ago was savaged for saying, "I was for the $87 billion before I was against the $87 billion," and that, of course, a question about war funding.

As a viewer when you watch the coverage, does this make you think, well, Obama, he talks about the audacity of hope and he's just another politician, or is that not your reaction?

LOLA OGUNNAIKE, CNN: No, not at all. In fact, I mean, I'm inclined to say that flip-flopping is so four years ago. It's just not what anybody is talking about anymore. It's so passe.

I mean, people want to talk about Michelle Obama and her great toned arms and how does she get those pecks. I mean, no one wants to talk about flip-flopping. I'm sorry, Howard, but that's just the truth.

Now, flash forward to the next segment in this installment when Kurtz addressed John McCain's recent flip-flop on offshore drilling. Watch how Ogunnaike's position on such changes of heart, well, flip-flops:

KURTZ: Lola Ogunnaike, I know you don't care that much about flip-flops, so is this the wrong scorecard for the media to be using? Isn't -- doesn't -- you know, politicians are entitled to change their positions as new facts come in, or they rethink something, but what bothers me is they never admit changing their position. They always try to rationalize it with some excuse.

OGUNNAIKE: Because if they admit changing their positions, they are vilified. So Hillary Clinton can't say -- come out and say, I voted for the war and that was wrong. She has to hedge her bets, she has to qualify what she did. If they come out and say, you know what? I made a mistake, or I wasn't exactly right about that last time, they are vilified, and so they decide that they would rather dance around the subject than address it straight on.

KURTZ: Why are they vilified? Because the media likes to play "gotcha," you said this then and now you are saying this now, and therefore you're not sincere?

Interesting. So, for Ogunnaike, "no one wants to talk about flip-flopping," "flip-flopping is so four years ago" and "so passe" when Obama does it. However, when it's McCain -- or even Clinton -- "there's no room for evolution of thought" "[b]ecause if they admit changing their positions, they are vilified."

Pretty amazing, wouldn't you agree? Explains a lot about just how different the coverage of Obama is as compared to McCain. But there was more that needs to be addressed in the previous segment, for as Kurtz continued to press his guests on this matter, the truth finally emerged:

KURTZ: But that sort of strikes at the heart of what we do. I mean, if a candidate says one thing trying to win the Democratic nomination, wins the nomination, and then throws that out the window -- and look, the obvious reason Obama is doing this is because he has an incredible machine through which he can raise money from small donors over the Internet -- and we don't blow the whistle, then what is our purpose here?

KORNBLUT: You're absolutely right. And I think that some of the coverage seems to have bought into the logic that, well, it's broken now, once he wins he can fix it. That's not -- we don't cut all politicians that break and assume they will do something different than they do in their campaign once they're elected. I don't see why he's any different.

MASON: Sure, look at Mitt Romney. Look how the press treated him in his flip-flop on abortion and other issues. That was huge.

Now look, you know, Obama is entitled to do whatever he wants and make the case, but it wasn't a very persuasive case when he talks about how conservative groups may come after him with ads. At the moment there aren't any of these 527 conservative groups to speak of with any money.

If George W. Bush had done this, blown off public financing, as he considered doing during the 2004 campaign, there would be howls in the media about one candidate trying to buy an election.

We here at the MRC hope that you will continue to expose this pathetic hypocrisy for the next four and a half months.