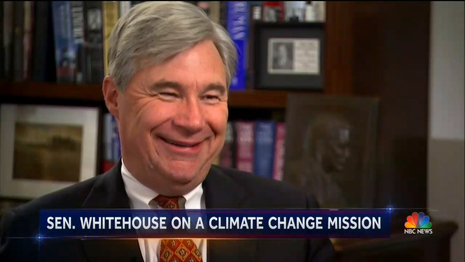 On Monday, the country was again reminded of the hypocrisy of Democratic Rhode Island Senator Sheldon Whitehouse who was discovered to be a long-time member of an “all-white” private elitist beach club, Bailey’s Beach Club. And as usual, the liberal broadcast networks (ABC, CBS, NBC) deemed a race scandal involving a Democrat too unimportant to give it airtime on their evening newscasts.

And despite the fact that the story was circulating all day, NBC didn’t get around to publishing a piece online about Whitehouse’s scandal until after NBC Nightly News was already in progress. Though they were the only broadcast network to put out any kind of report.

With four reporters contributing, this story wasn’t a mystery to the network. But instead of giving the story airtime, they chose to gawk at their handy work in the form of “all-time low” police morale after they spent a year stoking hate against the police.

Those NBC reporters also noted that when “Asked if such ‘elite all-white wealthy clubs’ should still exist, Whitehouse said, ‘It's a long tradition in Rhode Island and there are many of them. I think we just need to work our way through the issues, thank you.’”

When it came to the diversity of the club, the NBC reporters waited until the very end to cite a 2003 New York Times report where a member admitted there were no black members. “‘Jewish, yes,’ the member said, but '’Blacks, not really.'’ The article noted that one of the members had grown grandchildren who were biracial and would sometimes visit,” they wrote.

After noting that Bailey’s Beach Club had not responded to NBC’s request for comment, the four recalled that Whitehouse had promised quit the club back in 2006, but instead handed over his membership to his wife:

According to GoLocal, Whitehouse promised to quit his membership in the club when he was running for Senate in 2006, but transferred his shares to his wife. The site first confronted him about his refusal to step down in 2017.

"I think it would be nice if the membership changed a little bit," he told GoLocal then. Asked if he would pressure the club to do so, he said, "I will take that up privately."

Asked Monday when he "consolidated" his membership with his family's, he said he couldn't remember.

“In an interview Friday with local news site GoLocal Prov, Whitehouse was asked whether the club has any non-White members,” reported Felicia Sonmez of The Washington Post. “‘I think the people who are running the place are still working on that, and I’m sorry it hasn’t happened yet,’ Whitehouse replied.”