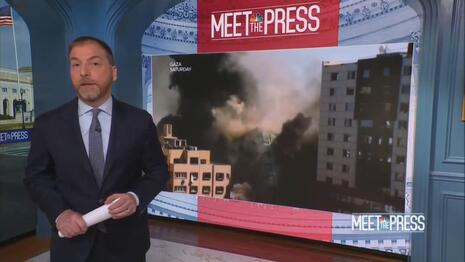 NBC political director Chuck Todd kicked off Sunday’s Meet the Press with a truly disgusting display of dishonesty and gaslighting. When it came to reporting on how Israel bombed a building on Saturday that housed a Hamas intelligence center along with multiple media outlets that were using as human shields, Todd completely ignored the Hamas element and suggested Israel was targeting the media. He also didn’t admit that Israel had warned the news outlets and everyone in the building was evacuated.

“But we’re going to begin with the fighting between Israel and Hamas. One day after the Israelis targeted and demolished a building in Gaza housing international news organizations,” Todd claimed at the top of the broadcast.

Meanwhile, on CBS’s Face the Nation, Israeli Prime Minister Benjamin Netanyahu was explaining “the intelligence” they had about the building. “It’s about Palestinian terrorists, an intelligence office for the Palestinian terrorist organization housed in that building that plots and organizes the terror attacks against Israeli civilians. So, it is a perfectly legitimate target,” he said.

Netanyahu also noted the “special precautions” his country took to protect the media organizations in the building: “And I can tell you that we took every precaution to make sure that there were no civilian injuries (…) Because we, unlike Hamas, take special precautions to tell people to leave the building, leave the premises, and we make sure everyone is gone before we bring down those terrorist facilities.”

This was all known before Todd went to air, yet he refused to share it with his audience.

Todd was joined by chief foreign correspondent Richard Engel who suggested Israel was content with making a mess in Gaza by “destroying a lot of other buildings” and not just those connected to Hamas.

Earlier in the day, during NBC’s Sunday Today, Engel also peddled the false claim that Israel was targeting the press with their airstrike. “The AP said it was shocked and horrified and that the world would know less about what's happening in Gaza, which many here believe was exactly Israel's intention. Al Jazeera said it was an attempt to silence reporting in Gaza,” he parroted without evidence.

That idea was ridiculous on its face because the entire liberal media regurgitates the fictitious Gaza casualty numbers fed to them by the Hamas-control Health Ministry anyway.

Further in the segment, Engel lamented that “Palestinians in Gaza for the last several years have felt hopeless,” and falsely accused Israel of having “imprisoned [them] in the territory.”

Adding: “The infrastructure is terrible. There's really no employment. We spoke to a woman in Gaza. She said why bother – why bother dreaming about the future, why bother opening a business when just every couple of years everything is going to be destroyed and the clocks will start up again. And that hopelessness is dangerous.”

In reality, Hamas was to blame for their struggles. It’s known that Hamas took control of nearly all of the foreign aid given to the Palestinians. They use the infrastructure supplies to construct their “terror tunnels,” as Israel calls them, and used the money to buy rockets, missiles, and other weapons from Iran.

NBC’s support for a genocidal terrorist organization was made possible because of lucrative sponsorships from Google and Volvo. The contact information is linked so you can tell them about the biased news they fund.

CHUCK TODD: But we’re going to begin with the fighting between Israel and Hamas. One day after the Israelis targeted and demolished a building in Gaza housing international news organizations. Our chief foreign correspondent Richard Engel is in Tel Aviv for us. And Richard, on Friday you and I talked about this. And you had said Hamas and the Israeli government were looking for an exit ramp. Why can't they find it?

RICHARD ENGEL: Well, I think still that both sides do seem to want to find a way that they can declare victory. They both have a lot of interest in doing that. Israel so far hasn’t invaded the Gaza Strip and it could have done that. So, it is holding off. And instead, it is just launching airstrikes, causing a lot of damage inside Gaza as it is degrading the Hamas military infrastructure and destroying a lot of other buildings.

If Israel were to roll in with its tanks, it would face intense ground assaults, its soldiers could get kidnapped, there are booby-traps. So, there are a lot of reasons that Israel doesn’t necessarily want to do that.

Palestinians in Gaza for the last several years have felt hopeless. They are imprisoned in the territory. The infrastructure is terrible. There's really no employment. We spoke to a woman in Gaza. She said why bother – why bother dreaming about the future, why bother opening a business when just every couple of years everything is going to be destroyed and the clocks will start up again. And that hopelessness is dangerous.

But I do think, yes, both sides are looking for a way where they can say they've achieved something and now let's dial it back without having to destroy the region and put a lot of Israeli troops at risk.

ENGEL: They're not -- neither side is particularly close to the other, but they do have influence. That is the way these conflicts have ended in the past with the United States and Egypt and other countries getting involved. So, they don't have the kind of personal relationships. The U.S. is not even talking to Hamas. The U.S. reached out and spoke to Mahmoud Abbas, who has almost no influence over Hamas and what's happening in Gaza. But the United States still, absolutely, is a major power in this, has great relations with Israel and its voice is important.