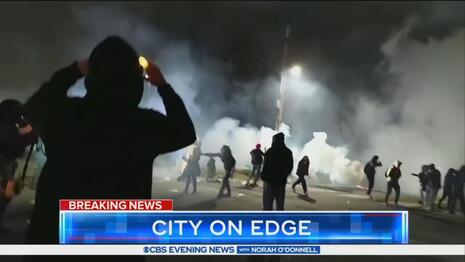 The left’s Orwellian redefining of words took a dangerous step Monday as all three of the broadcast networks (ABC, CBS, and NBC) started to refer to the riots of Brooklyn Center, Minnesota as “protests,” effectively dropping the “mostly peaceful” label they were mocked for using in the summer of 2020. All of this followed an apparently accidental shooting where a police officer seemingly went to use her Taser but discharged her duty pistol instead.

The first showing of the media’s dangerous rebranding of riots came earlier in the day when an activist journalist screamed at Brooklyn Center Police Chief Tim Gannon, saying “there was no riot” as he described how his officers were attacked with projectiles. “The officers that were putting themselves in harm's way were being pelted with frozen cans of pop, they were being pelted with concrete blocks,” he told the press.

There is no such thing as a “violent protest,” “protesters” don’t clash, and states of emergency are not needed. Those are rioters. And cities don’t need to call in the National Guard because they’re “on edge and bracing for another night of protests.” But that was O’Donnell’s spin.

Holt also lamented how “the community [was] bracing for another night of protests and unrest.”

ABC correspondent Stephanie Ramos flaunted her cognitive dissonance as she reported on how “protests erupted.” While showing a clip of a woman yelling “Oh, my God,” explosions could be heard in the background.

But, Omar, what about the frozen cans of soda and the cement blocks that were thrown at the police?

On NBC, correspondent Meagan Fitzgerald suggested it was the police who “escalated” the situation:

FITZGERALD: Hundreds of protesters took to the streets outraged.

CROWD: No justice. No peace.

And she didn’t bat an eye as she reported how a state of emergency and curfew were put in place as “more protests are expected tonight.”

It’s almost as if they’re glorifying the violence, or they want it.

This dangerous word game was made possible because of lucrative sponsorships from Dell on ABC, Progressive on CBS, and Liberty Mutual on NBC. Their contact information is linked so you can tell them about the biased news they fund.

MUIR: And Stephanie Ramos with us tonight from Brooklyn Center, outside Minneapolis. And Stephanie, I know the governor tonight announcing a curfew in the Twin Cities Metro Area. They're bracing for more protests?

RAMOS: Yes, David. And you can already a large crowd of protesters gathered outside the Brooklyn Center Police Department behind me. That curfew does go into effect tonight from seven o’clock this evening until six o’clock tomorrow morning in multiple cities including Minneapolis and right here in Brooklyn Center. And police tell us that communities will see an increased presence of the Minnesota National Guard and other law enforcement.

NORAH O’DONNELL: Good evening and thank you for joining us. We're going to begin tonight with breaking news. The state of Minnesota is on edge and bracing for another night of protests after the police shooting of a black man just a few miles from where former officer Derek Chauvin is on trial for killing George Floyd. Well, tonight the cities of Minneapolis and St. Paul are under states of emergency and the governor has imposed a seven o’clock curfew for surrounding cities.

OMAR VILLAFRANCA: There’s a big crowd of protestors behind me blocking the street in front of the Brooklyn Center Police Department. On the other side, National Guardsmen and officers in full riot gear standing behind concrete barricades and fencing they have just set up, getting ready for what could become another long night.

VILLAFRANCA: Wright's killing sparked a night of chaos just ten miles from where former officer Derek Chauvin is on trial for the murder of George Floyd. Protesters confronted police who responded with flash bangs and tear gas, as local businesses were also looted.

Minneapolis Mayor Jacob Frey declared a state of emergency and the governor set a 7:00 p.m. curfew for the entire city.

LESTER HOLT: The outrage, protesters clashing with police, a state of emergency declared, a curfew ordered, and the National Guard on alert.

HOLT: Meantime, the community bracing for another night of protests and unrest, President Biden making this appeal this afternoon.

MEAGAN FITZGERALD: Hundreds of protesters took to the streets outraged.

CROWD: No justice. No peace.

FITZGERALD: A state of emergency has been declared in Minneapolis. Here in Brooklyn Center, a curfew is in place, but more protests are expected tonight.