CBS Touts Buttigieg on Potholes, Hid How Domino’s Stepped In to Fill Some 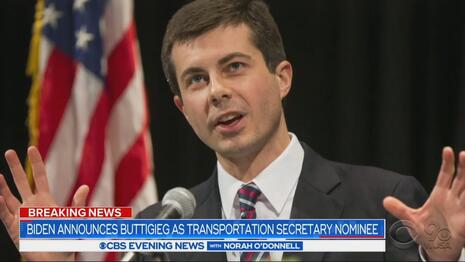 On Wednesday, President-elect Joe Biden made his pick for Transportation secretary official by nominating former South Bend, Indiana Mayor Pete Buttigieg to the position. Utterly downplaying his lack of qualifications for the job, CBS Evening News found humor in a Buttigieg quip about dealing with potholes as mayor. But what they refused to disclose was how the roads in his town got so terrible that the Domino’s Pizza chain had to step in and partially pay to have them filled in.

Political correspondent and Biden sentinel Ed O’Keefe was tickled but Buttigieg’s comments at the transition announcement about battling potholes as mayor:

O’KEEFE: A former primary rival of Mr. Biden, the 38-year-old is going to become the youngest member of the cabinet. And while Buttigieg has no professional experience in the transportation sector, he said:

BUTTIGIEG: I faced a constant battle with that natural enemy of all mayors, the pothole.

But in reality, Buttigieg and his administration did a very poor job, and a dubious one at that.

According to numerous reports from across the political spectrum, the roads in South Bend were so terrible that the residents petitioned Domino’s Pizza to look at giving the city $5,000 via their “Paving for Pizza” program. The pizza chain selected one locality per state each year, and South Bend was awarded the grant in 2019.

According to reporting from the South Bend Tribune, from almost a year before getting the pizza money, “Potholes around South Bend might be worst in recent memory.” The roads were apparently so terrible under Buttigieg’s watch that repair shops saw a massive increase in damaged cars and suspension problems:

Zolman said the pothole problem resulted in six figures of additional business back for Zolman Tire & Auto Repair during the last bad outbreak. He’s likely to have even more business this year as the prices for tires, rims and labor have only gone up.

Zolman said about 300 people have visited his shops in South Bend, Mishawaka, Granger and Niles over the past week. Most of the damage has hovered between $500 and $1,000, but some unfortunate motorists have been hammered even worse with suspension damage.

There were other reports which noted South Bend allocated $90,000 annually to fill potholes and $1.49 million (in 2017) for general “road improvements.” And apparently, after putting in some calls to the right people, Buttigieg’s staff managed to get engineers to put 0.2 miles of road in front of his house on the list to be repaved, and it was prioritized. The repaving cost residents $45,000.

“Though his street was not initially slated for repavement by the city in the summer of 2017, emails obtained through a Freedom of Information Act request show that Buttigieg’s then-chief of staff Angela Kouters expressed concern that Buttigieg's home would not benefit from road maintenance,” The Washington Free Beacon reported earlier this year.

Ignoring all of that lack of experience and mismanagement, O’Keefe suggested that if Senate Republicans chose to block Buttigieg’s nomination it would be because he was openly gay.

That was the sound of CBS’s journalistic integrity bottoming out in a South Bend pothole.

ED O’KEEFE: President-elect Joe Biden said his choice for transportation secretary, Pete Buttigieg would be tasked with helping get the country back on its feet after the pandemic.

PRESIDENT-ELECT JOE BIDEN: He's got a vision of a next generation leader.

O’KEEFE: A former primary rival of Mr. Biden, the 38-year-old is going to become the youngest member of the cabinet. And while Buttigieg has no professional experience in the transportation sector, he said:

PETE BUTTIGIEG: I faced a constant battle with that natural enemy of all mayors, the pothole.

O’KEEFE: Notably, Buttigieg would be the first openly gay man confirmed by the U.S. Senate to the cabinet. Today he recalled being a teenager, watching as Republicans blocked another gay man from serving in Bill Clinton's administration.

BUTTIGIEG: Two decades later, I can't help but think of a 17-year-old somewhere who might be watching us right now, somebody who wonders whether and where they belong in the world. Or even in their own family.