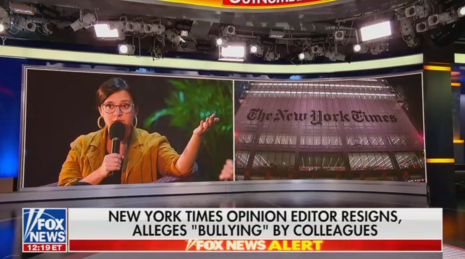 For three years, Bari Weiss has been one of the scant few voices of fairness at The New York Times. But as of Tuesday, her time as staff editor and writer ended with a public resignation letter that called out the so-called “paper of record” for pushing ideological “orthodoxy,” kowtowing to Twitter mobs, and the internal “new McCarthyism.” She also exposed the “unlawful discrimination” and “hostile work environment” she was subjected to by her peers, all because she didn’t toe the liberal line.

“It is with sadness that I write to tell you that I am resigning from The New York Times,” Weiss began her letter addressed to publisher A.G. Sulzberger, which she posted on her website. She explained that she “joined the paper with gratitude and optimism three years ago,” when The Times claimed it was making an effort to make up for not covering the country properly and getting blindsided by the 2016 presidential election.

“But the lessons that ought to have followed the election—lessons about the importance of understanding other Americans, the necessity of resisting tribalism, and the centrality of the free exchange of ideas to a democratic society—have not been learned,” she lamented.

Like something out of George Orwell’s 1984, Weiss noted that the press and The Times in particular viewed “truth” not as “a process of collective discovery, but an orthodoxy already known to an enlightened few whose job is to inform everyone else.”

Describing it as a “performance space,” Weiss recounted how the Times had adopted the “ethics and mores” of Twitter and had allowed the mob to become an editor (click “expand”):

Twitter is not on the masthead of The New York Times. But Twitter has become its ultimate editor. As the ethics and mores of that platform have become those of the paper, the paper itself has increasingly become a kind of performance space. Stories are chosen and told in a way to satisfy the narrowest of audiences, rather than to allow a curious public to read about the world and then draw their own conclusions. I was always taught that journalists were charged with writing the first rough draft of history. Now, history itself is one more ephemeral thing molded to fit the needs of a predetermined narrative.

Some of the more disturbing experiences came from her paragraphs detailing the open harassment she received for her colleagues.

“My own forays into Wrongthink have made me the subject of constant bullying by colleagues who disagree with my views,” she wrote. According to her, Times journalists would call her “a Nazi and a racist,” while at the same time flashing the anti-Semitism the paper has become infamous for: “I have learned to brush off comments about how I’m ‘writing about the Jews again.’”

Speaking about the abuse she would receive in public, she added (click “expand”):

My work and my character are openly demeaned on company-wide Slack channels where masthead editors regularly weigh in. There, some coworkers insist I need to be rooted out if this company is to be a truly ‘inclusive’ one, while others post ax emojis next to my name. Still other New York Times employees publicly smear me as a liar and a bigot on Twitter with no fear that harassing me will be met with appropriate action. They never are.

“There are terms for all of this: unlawful discrimination, hostile work environment, and constructive discharge. I’m no legal expert. But I know that this is wrong,” she decried, further noting that editors would stand by while praising her for her bravery. “Showing up for work as a centrist at an American newspaper should not require bravery.”

Unfortunately, Weiss’s experience wasn’t unique. She went on to describe how the liberal ideology would dictate what they could publish, often leaning towards bashing President Trump (click “expand”):

Part of me wishes I could say that my experience was unique. But the truth is that intellectual curiosity—let alone risk-taking—is now a liability at The Times. Why edit something challenging to our readers, or write something bold only to go through the numbing process of making it ideologically kosher, when we can assure ourselves of job security (and clicks) by publishing our 4000th op-ed arguing that Donald Trump is a unique danger to the country and the world? And so self-censorship has become the norm.

What rules that remain at The Times are applied with extreme selectivity. If a person’s ideology is in keeping with the new orthodoxy, they and their work remain unscrutinized. Everyone else lives in fear of the digital thunderdome. Online venom is excused so long as it is directed at the proper targets.

“The paper of record is, more and more, the record of those living in a distant galaxy, one whose concerns are profoundly removed from the lives of most people,” she chided, noting how the paper has praised Soviets, doxed teenagers, and compared America with Nazi Germany.

But Weiss suggested that not everyone at The Times thought that way, saying that young writers and editors were forced to keep their heads down and be untrusting of their editors. “Too wise to post on Slack, they write to me privately about the ‘new McCarthyism’ that has taken root at the paper of record.”

As she wrapped up the letter, Weiss accurately pointed out that “America is a great country that deserves a great newspaper.” And recalled the maxim of former Times publisher Adolph Ochs: “to make of the columns of The New York Times a forum for the consideration of all questions of public importance, and to that end to invite intelligent discussion from all shades of opinion.”