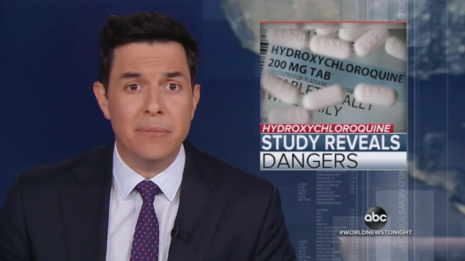 Just as with their cable counterparts, the evening newscasts of ABC, CBS, and NBC refused to give airtime to the revelation that a lauded scientific study, purporting to show anti-malaria drug hydroxychloroquine was ineffective and deadly, was retracted Thursday because of questions surrounding its accuracy and ethics. That, even though all three had used the study to chide President Trump for pushing the drug and taking it himself.

The broadcast networks ignored the new revelations, but combined for one minute and 30 seconds pushing the study on May 22, the day it was published. ABC dedicated a 20-second news brief to the study, CBS gave it 37 seconds, and NBC had 33 seconds.

The Lancet study was withdrawn because the company who collected that data, Surgisphere Corporation, refused to turn over all the information to be peer-reviewed. And according to The Hill:

The three authors of the study, led by Mandeep R. Mehra of Harvard Medical School and published in late May, retracted their study from the Lancet because independent peer reviewers could not access the data used for the analysis.

The source of the data was Surgisphere Corporation, which told peer reviewers it would not transfer the full dataset used for the study because it would violate client agreements and confidentiality requirements.

A Guardian investigation can reveal the US-based company Surgisphere, whose handful of employees appear to include a science fiction writer and an adult-content model, has provided data for multiple studies on Covid-19 co-authored by its chief executive, but has so far failed to adequately explain its data or methodology.

All of that went unreported on Thursday night’s editions of ABC’s World News Tonight, the CBS Evening News, and NBC Nightly News. But back on May 22, when the study was published, they all used it to take shots at President Trump.

“Mr. Trump said his hydroxychloroquine treatment would likely end today, the same day a leading memory journal, The Lancet warned not only does the drug not offer benefits, it could cause harm,” reported CBS White House correspondent Weijia Jiang at the time.

ydroxychloroquine was a drug “the President has touted and taken, despite no evidence yet it prevents COVID-19.”