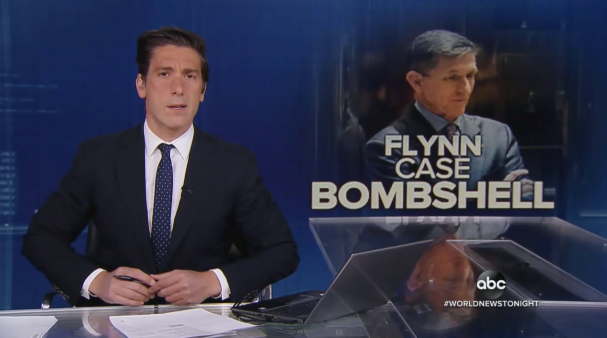 Nearly two and a half years after accepting a plea deal because he was entrapped by anti-Trump FBI investigators, former General Michael Flynn saw light at the end of the tunnel Thursday. After the case was reviewed by the Department of Justice, Attorney General William Barr order the case be dropped citing the fact Flynn had not lied about anything material or central to the Russia investigation. The development didn’t go over well with the liberal broadcast networks, who had previously spent copious airtime celebrating the plea as another step closer to getting President Trump out of office.

On December 1, 2017, after Flynn stepped into a federal courthouse to plead guilty, the ABC, CBS, and NBC evening newscasts spent a combined 24 minutes and eight seconds celebrating it. NBC Nightly News clocked in at over eight minutes (8:24), ABC’s World News Tonight also had over eight minutes (8:12), and CBS Evening News wasn’t far behind with over seven minutes (7:32).

Yet, for Barr’s decision to drop the dubious case, they could only muster six minutes and 35 seconds. This time, CBS had the most with just under three minutes (2:58), NBC had two minutes and four seconds, and ABC brought up the rear with one minute and 33 seconds. And none of them showed viewers the exculpatory evidence presented in recently released notes from FBI investigators, who made it clear they were going out of their way to target the General.

Not only were the time disparities (nearly 4x) something of note, so were their tones, as their 2017 newscasts brimmed with their excitement to see the walls close in on Trump. 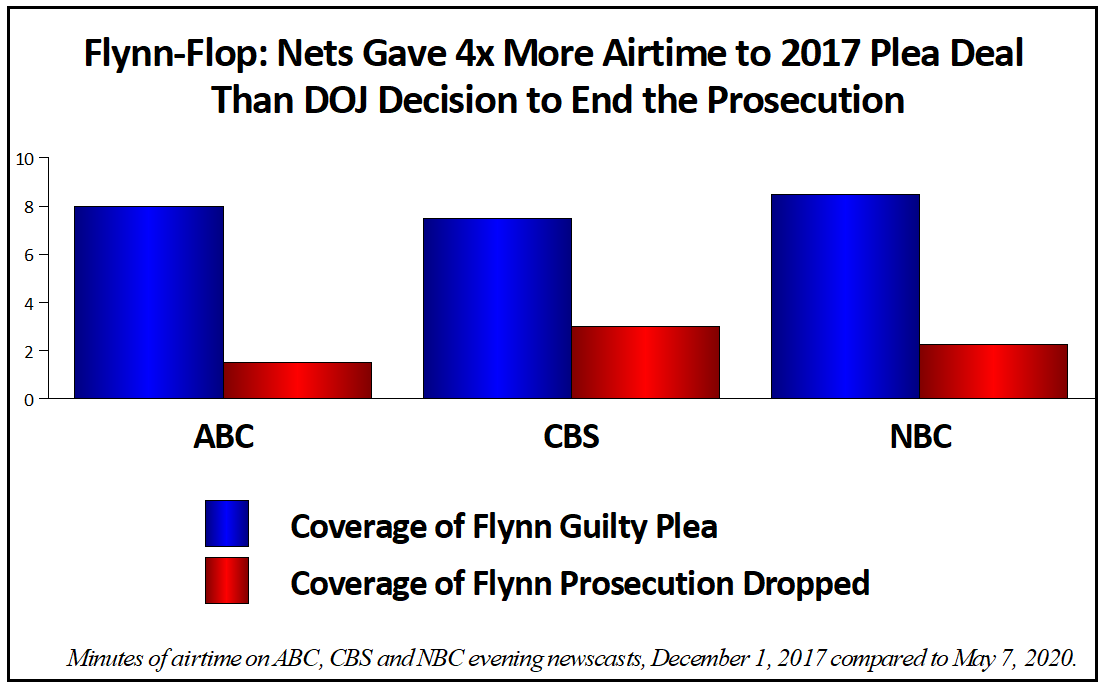 At the time, then-ABC chief investigative correspondent Brian Ross boasted about the vicious reception Flynn received at the courthouse. “He was once one of the President's closest advisers, one of his first major appointments, but today as General Michael Flynn walked out of court in Washington, protesters chanted, lock him up.” And on Thursday, despite the fact that Flynn was now innocent, ABC again played a clip of that crowd’s chant.

Ross was ultimately suspended and later forced out because he cooked up fake news that day, claiming Trump had ordered Flynn to make contact with the Russians before the election.

Disregarding the exculpatory evidence and proof of corrupt investigators, on Thursday, ABC chief Justice correspondent Pierre Thomas whined about how dropping the case could harm the FBI. “But tonight, we've not heard from FBI officials, who have been adamant that lying to them compromises the entire criminal justice system,” he declared.

For CBS’s part, then-fill in Evening News anchor Anthony Mason began the broadcast by bragging about how “the special counsel [Robert Muller] got himself a three-star witness” against President Trump in the Russia investigation.

And since she had never used her show to report on the released FBI notes, current anchor Norah O’Donnell dubbed Thursday’s decision a “stunning reversal.” She also blamed Flynn’s lawyers and “conservative media” for lobbying for the case to be dropped.

Thursday’s report was delivered by senior investigative correspondent Catherine Herridge. And while her Twitter account had examined the FBI’s notes, her report sadly didn’t mention them at all. But she did have an exclusive interview with Barr in which she asked if he was following orders from the President (click “expand”):

HERRIDGE: Are you doing the president's bidding?

HERRIDGE: You know you're going to take a lot of incoming, as they say in the military, for-- for this decision.

BARR: I'm prepared for that. But I also think it's sad that nowadays, these partisan feelings are so strong, that people have lost any sense of justice.

As for NBC Nightly News, at the time, anchor Lester Holt turned to political director Chuck Todd and asked: “If you're in the White House right now -- about now, what are you thinking? How worried are you about Mike Flynn cooperating with Mueller?” As if the administration was filled with Russian assets.

“This not only brings it into the White House, this brings Bob Mueller into the Trump family,” Todd proclaimed. “And when you start thinking about who’s above Mike Flynn during the campaign, during the transition, there's only a few dots to connect. One is Jared Kushner, one is Donald Trump Jr. and one is the President. That's why this is so serious.”

But on Thursday, NBC came the closest to acknowledging the existence of the FBI notes. Senior White House correspondent Peter Alexander told viewers: “Just days ago, prosecutors turned over documents to Flynn that his lawyers say show the FBI tried to set Flynn up in its interview.” But the documents had been out there for days, he could have cited and read from them.

ALEXANDER: But late tonight, former FBI Deputy Director Andrew McCabe blasted the decision saying it has nothing to do with the facts or law calling it “pure politics designed to please the President.”

This likely won’t be the last time the liberal media will get bad news in regards to their Russian collusion narrative falling apart. There’s currently a DOJ investigation being conducted into the origins of the Russia investigation and reports suggest heavy shoes will drop.

DAVID MUIR: And now to that other major headline this evening. The Department of Justice seeking to withdrawal all criminal charges against Michael Flynn, President Trump’s first national security adviser who pleaded guilty to lying to the FBI. Here's our chief Justice correspondent Pierre Thomas tonight.

PIERRE THOMAS: Tonight, the Department of Justice announcing a bombshell, seeking to drop the case against Michael Flynn.

CROWD: Lock him up!

THOMAS: It was 29 months ago, he left the courthouse in shame, after pleading guilty to lying to the FBI. The day after that plea, the President tweeting he dismissed his national security adviser because he lied to the vice president.

PRESIDENT DONALD TRUMP: I fired him because of what he said to Mike Pence, very simple.

THOMAS: Flynn's guilty plea centered around lying about his contact to then-Russian Ambassador Sergey Kislyak. But today, the Justice Department concluded that Flynn's prosecution was "Unjustified" and that "His statements were not material to any viable counterintelligence investigation" concerning the Russians. Today, the President praising Flynn as a hero.

TRUMP: He was an innocent man. He is a great gentleman.

THOMAS: Then the President directed his fire at the FBI for an investigation into Russian interference that he believes should never have been started.

THOMAS: But tonight, we've not heard from FBI officials, who have been adamant that lying to them compromises the entire criminal justice system.

David, we're unsure how the judge in the case is going to react in the past, he's been very critical of Flynn. David?

NORAH O’DONNELL: Now to a stunning reversal by the Justice Department in the Russia investigation. Today, the Attorney General told federal prosecutors to drop their case against Michael Flynn, President Trump's first national security adviser. Flynn had pleaded guilty to lying to the FBI and was fired by the President. But, after at first cooperating with the Mueller investigation, Flynn changed his tune and his lawyers, along with conservative media, lobbied for the case to be dropped. Well, tonight, in a CBS News exclusive, Attorney General William Barr explains his decision to our Catherine Herridge.

CATHERINE HERRIDGE: In our exclusive interview this afternoon, inside the Department of Justice, the attorney general said he was obligated to drop the charges against the President's former national security adviser.

AG WILLIAM BARR: Our duty, we think is to dismiss the case.

PRESIDENT DONALD TRUMP: Flynn lied, and it's like they ruined his life. It's very unfair.

HERRIDGE: But the department's filing says the FBI's interview with Flynn was "unjustified" and done "Without any legitimate basis."

BARR: A crime cannot be established here. They did not have a basis for a counterintelligence investigation against Flynn at that stage.

HERRIDGE: Does the fact remain that he lied?

BARR: Well, you know, people sometimes plead to things that turn out not to be crimes.

HERRIDGE: What should Americans take away from your actions in the Flynn case today?

BARR: I want to make sure that we restore confidence in the system. There's only one standard of justice.

HERRIDGE: President Trump, who has long claimed that Flynn was railroaded, called him a hero.

TRUMP: He was an innocent man.

HERRIDGE: Are you doing the president's bidding?

HERRIDGE: You know you're going to take a lot of incoming, as they say in the military, for-- for this decision.

BARR: I'm prepared for that. But I also think it's sad that nowadays, these partisan feelings are so strong, that people have lost any sense of justice.

HERRIDGE: Flynn welcomed the news with a tweet of his grandson. And former FBI Director Jim Comey, who started the investigation into the President, voiced his displeasure on Twitter saying, the department “had lost its way."

When history looks back on this decision, how do you think it will be written?

BARR: Well, history is written by the winners, so it largely depends on who's writing the history.

HERRIDGE: Flynn's fate rests with the federal judge here in Washington. He can dismiss the case or according to one legal expert, he could call fair hearing with all of the parties, given the extraordinary circumstances. Tonight, the Attorney General emphasized to CBS News that they continue to investigate other aspects of the FBI Russia probe. Norah.

O’DONNELL: All right, Catherine Herridge, with that exclusive. Thank you.

LESTER HOLT: But by late today, the White House found something to celebrate as the Justice Department announced it wants to drop the criminal case against Michael Flynn, a major figure in the Russia investigation.

PETER ALEXANDER: Also today, in a surprise twist, the Justice Department moved to drop its case against Michael Flynn, who served briefly as President Trump's first national security advisor and later pleaded guilty to lying to the FBI about Flynn's contacts with Russia's ambassador to the U.S.

The President fired Flynn for misleading the Vice President about his conversations with that ambassador and the case was one of Special Counsel Robert Mueller's first prosecutions.

After a review of the Flynn case ordered by Attorney General William Barr, the Justice Department is now asking a federal judge to throw the conviction out, saying Flynn should have never been charged in the first place.

Just days ago, prosecutors turned over documents to Flynn that his lawyers say show the FBI tried to set Flynn up in its interview. In a court filing, the government says Flynn's statements were not “material” or central to any investigation that the FBI was conducting.

The President had been considering a pardon for Flynn and tonight, welcomed the news.

PRESIDENT DONALD TRUMP: He was an innocent man. He is a great gentleman. He was targeted by the Obama administration, and he was targeted in order to try and take down a president.

ALEXANDER: But late tonight, former FBI Deputy Director Andrew McCabe blasted the decision saying it has nothing to do with the facts or law calling it “pure politics designed to please the President.” Lester?

HOLT: All right, Peter, thank you. Let's bring in our Justice correspondent Pete Williams now. Pete, what reason does the Justice Department give for wanting to drop this case?