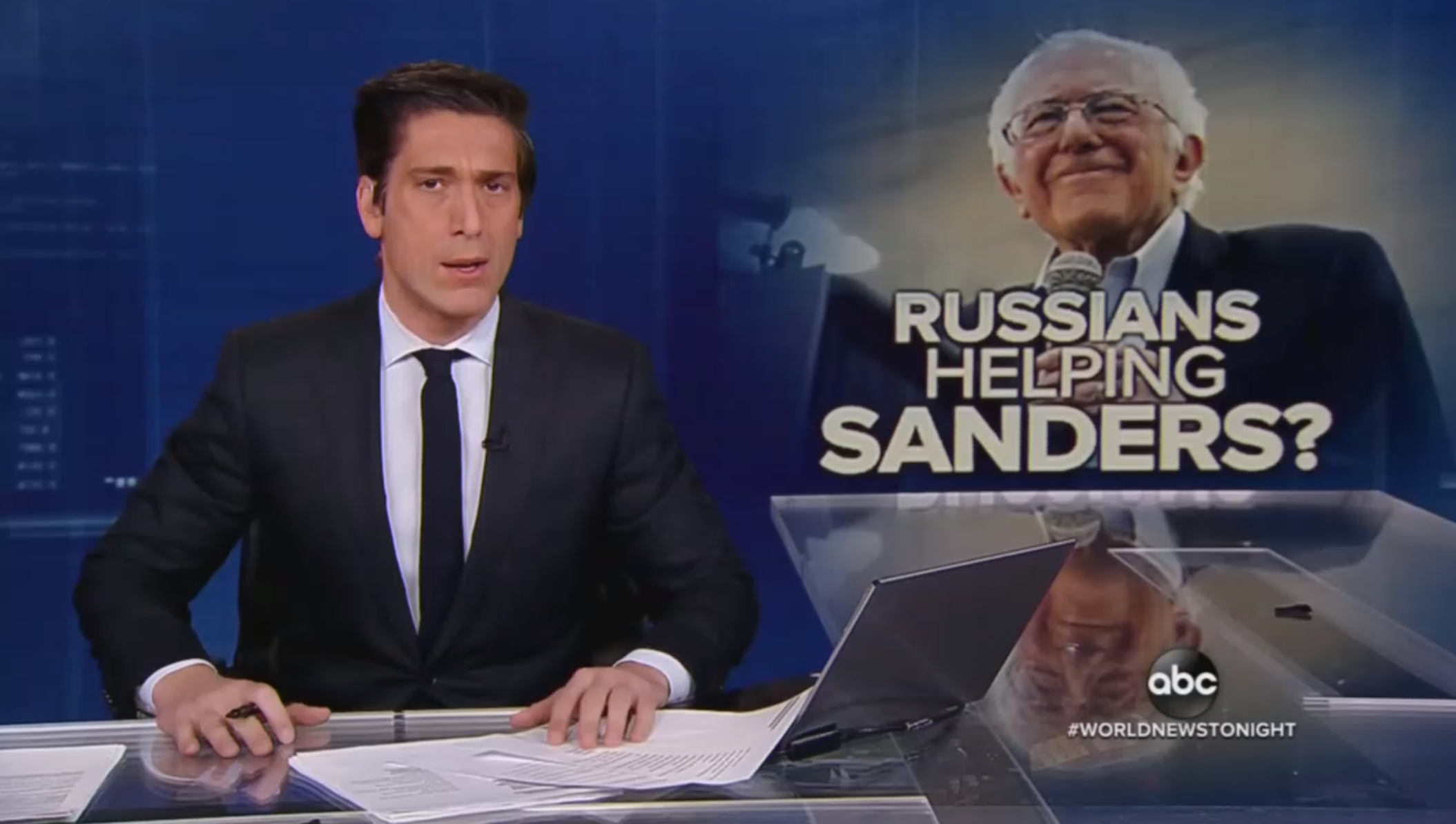 Apparently, some cases of Russian election interference were more important than others. The night before Senator Bernie Sanders’ (I-VT) runaway victory in the Nevada caucuses on Saturday, news broke that Russia was trying to help the staunch socialist and Soviet Union honeymooner to win the election. Despite that story being breaking news, the evening newscasts all three broadcast networks dedicated more time to similar claims of Russia backing President Trump’s reelection and his reaction.

During their Friday evening newscasts, the night we learned Russia was allegedly backing Sanders, the ABC, CBS, and NBC spent a combined five minutes and seven seconds of airtime talking about the Trump campaign and Russia. Contrast that with the two minutes and 55 seconds they gave to the Sanders revelation. CBS Evening News had the wildest disparity with one minute, 36 seconds on Trump and a mere 27 seconds for Sanders.

“American intelligence officials have been clear, Vladimir Putin's government is still trying to meddle in American elections. Tonight, CBS News has learned Bernie Sanders' campaign was told the Russians have been working to help his campaign,” announced CBS anchor Norah O’Donnell. But while she was speaking, an image of Trump and Russian President Vladimir Putin appeared over her shoulder.

To CBS’s credit, they’re the only network admitting that even Democratic members of Congress pushed back on the claims of intelligence officials during the briefing, suggesting a lack of evidence.

Over on ABC, anchor David Muir teed up chief White House correspondent Jon Karl to critique the reactions from Sanders and Trump:

KARL: Very different reactions, David. The President called it all a hoax. Bernie Sanders on the other hand does not dispute that Russia may be trying to help his campaign. In fact, he has denounced those efforts and said they were not welcome.

Their on-screen headlines also exposed their bias. When the Trump/Russia story broke on Thursday, ABC's headline read, "Intelligence briefing bombshell," but for Sanders there was uncertainty: "Russians helping Sanders?"

As caucus results were rolling in Saturday night, and Sanders was the clear victor, only ABC cared to mention Russian interference. But the time difference was outrageous. Sanders, the winner, got just 25 seconds of airtime compared to Trump’s two minutes and 11 seconds.

The airtime disparity between Trump and Sanders came after the networks had already spent five minutes and four seconds, on Thursday, prepping the groundwork for crediting a possible second term for Trump to Russia. So, in total, the networks had spent 12 minutes and 22 seconds on Russia backing Trump, and three minutes and 20 seconds on Russia backing Sanders. Since Sanders was running to be president, he also needed the scrutiny.