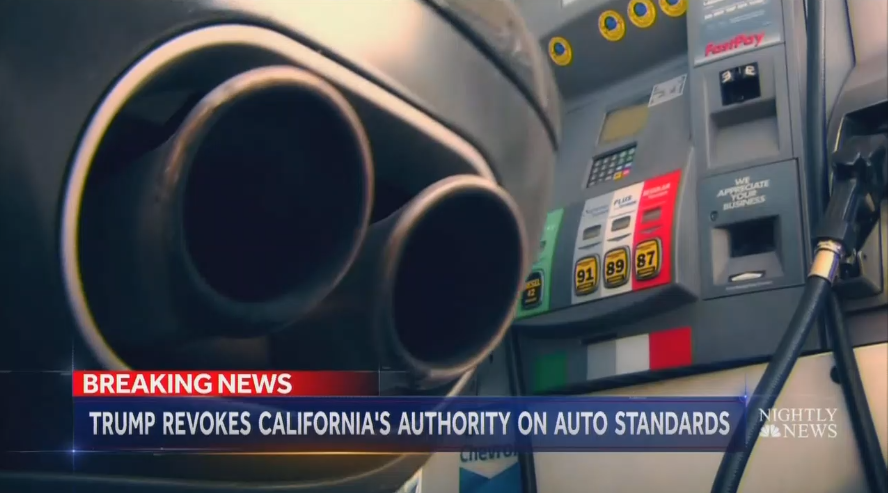 The same networks that banded together to bully pro-life states earlier this year after they passed sweeping legislation to protect the life of unborn children, spent Wednesday evening whining about President Trump threatening to revoke California’s self-prescribed emissions standards in favor of a national standard.

ABC, CBS, and NBC were up in arms following a tweet from the President. “Next, this evening, President Trump and a new feud with California tonight, telling that state it cannot set its own emissions standards, revoking that state's right to set its own limits for cars and trucks,” declared ABC’s World News Tonight anchor David Muir.

That network even had the nerve to play a sound bite of California Attorney General Xavier Becerra (D) proclaiming: “Our message to those to claim to support state's rights, don't trample on ours.”

CBS and NBC gusted about how, for roughly 50 years “California's long led the way reducing tailpipe emissions and increasing fuel efficiency to clean its air and fight climate change,” as NBC correspondent Ann Thompson did there.

“Now, the Trump administration wants to bring that to a stop,” she went on to huff, as if Trump was set to bring back the era of impenetrable smog that used to hang over Los Angeles. She also parroted the hyperbolic suggestions of California Democrats that Trump’s plan would lead to “more asthma, hospitalizations, and premature deaths.”

Thompson also reported that automakers BMW, Ford, Honda, and Volkswagen were “under federal investigation and say they are either cooperating or in touch with federal authorities.” But she didn’t at all mention why those companies were being looked at and left it up to viewers to infer it was because they had already agreed to California’s standards.

Seemingly suggesting President Trump’s apparent proposal was a threat to the entire world, the CBS Evening News placed the development in their so-called “Eye on Earth” series, where they discuss climate change.

“For nearly 50 years, California has been in the driver's seat, allowed to set its own strict vehicle emission standards to combat air pollution,” gushed CBS correspondent Ben Tracy. He then boasted that California’s standards were adopted by “12 other states and Washington, D.C....accounting for about one-third of the nation's auto market.”

Speaking of premature deaths, abortions killed close to an estimated one million unborn children every year. Meanwhile, the networks treated the nationwide proliferation of pro-life legislation as a scourge that was plaguing the country.

DAVID MUIR: Next, this evening, President Trump and a new feud with California tonight, telling that state it cannot set its own emissions standards, revoking that state's right to set its own limits for cars and trucks. California's governor calling it a political vendetta and he's vowing to fight back tonight. ABC's Matt Gutman from California.

MATT GUTMAN: Tonight, President Trump in California, picking what could be a long legal fight, with this tweet. "The Trump administration is revoking California’s federal waiver on emissions." Barring California from setting its own auto emissions standards, the President said is about making cars safer and cheaper. California leaders saying it’s about something else.

GOV GAVIN NEWSOM: Pure politics. And politics that could have profound consequences not just in terms of the air we breathe in the state of California. [Transition] But will impact the rest of the country.

GUTMAN: The EPA is proposing a single national standard for tailpipe emissions, injecting uncertainty into the automotive industry. California leaders say they will challenge it in court.

XAVIER BECERRA (CA attorney general): Our message to those to claim to support state's rights, don't trample on ours.

GUTMAN: The latest move against California, part of what the governor here calls the President’s “political vendetta” against the state.

NORAH O’DONNELL: President Trump tweeted today that he is revoking California's ability to set its own auto emission standards. California has the world's fifth-largest economy, and in tonight's "Eye on Earth" Ben Tracy reports how this plays out in California will have a nationwide impact.

BEN TRACEY: For nearly 50 years, California has been in the driver's seat, allowed to set its own strict vehicle emission standards to combat air pollution.

TRACY: President Trump wants one nationwide standard, and he wants it to be weaker than California's. Mr. Trump says fuel-efficient vehicles are too expensive and too small.

TRACY: Transportation pollution is the nation's single biggest source of planet-warming greenhouse gases. That's partly why 12 other states and Washington, D.C. follow California's higher emission standards, accounting for about one-third of the nation's auto market. And four major automakers are siding with California, saying even they don't want the federal government to aggressively weaken standards.

GOV. GAVIN NEWSOM: It begs the question, Mr. Trump, what and who is this for?

NEWSOM: It's the perversion of this moment, pure politics, and politics that could have profound consequences.

TRACY: California says its emission rules have prevented 29,000 premature deaths every year. The state now does plan to sue the Trump administration over its decision and, Norah, this looks like a fight that's headed for the Supreme Court.

O’DONNELL: All right, Ben, thank you.

LESTER HOLT: For almost 50 years, lawmakers here in California have been able to set their own car emission standards. But today, President Trump threatened to change all that. NBC's Ann Thompson on the potential impact across the country.

ANN THOMPSON: California's long led the way reducing tailpipe emissions and increasing fuel efficiency to clean its air and fight climate change. Now, the Trump administration wants to bring that to a stop, revoking California's ability to set its own emissions standards in favor of one national mark. State officials warn of dire consequences.

MARY NICHOLS (CA Air Resources Board chairwoman): Millions of people in California and other states that follow our standards will be breathing dirtier air.

President Trump tweeted the change would make cars cheaper and safer, and ominously told auto makers to “seize this opportunity because without this alternative to California, you will be out of business.”

Four automakers Ford, BMW, Honda, and Volkswagen already agreed to stricter standards. About 50 miles per gallon by 2026 instead of President Trump's proposed 37. Now, those companies are under federal investigation and say they are either cooperating or in touch with federal authorities. California promises to fight.

XAVIER BECERRA (CA attorney general): If they are not willing to do their job, we'll do it for them in court.

THOMPSON: Igniting an environmental civil war over how much vehicles should pollute. Ann Thompson, NBC News.