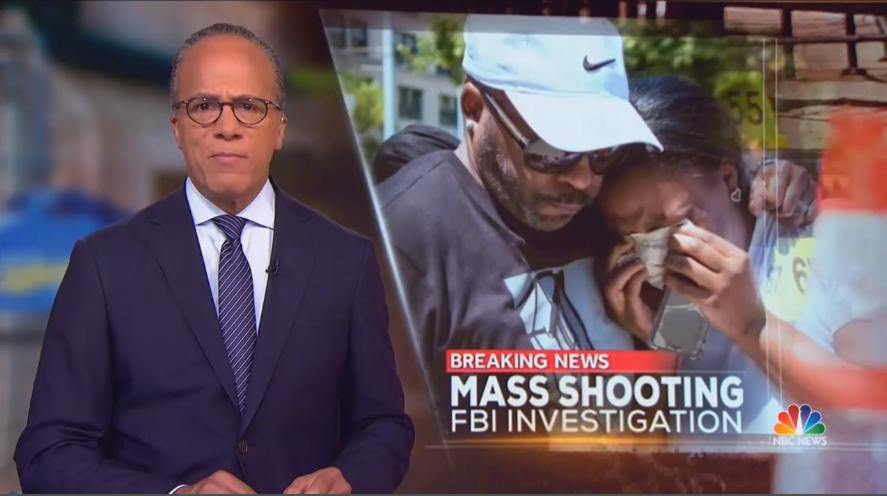 As NewsBusters research analyst Bill D’Agostino exposed Tuesday afternoon, the liberal broadcast networks were doing their best to avoid telling their viewers that the gunman behind the Dayton mass shooting was an admitted ‘leftist.’ But hours later, ABC’s World News Tonight was the first flagship network news program to break that trend when they footnoted that fact.

Meanwhile, the flagship CBS and NBC newscasts were still avoiding it like the plague.

“ABC News has also learned of a now-deleted Twitter account believed to be linked to [the shooter], describing himself as an ‘anime fan’, a ‘metalhead’, and a ‘leftist,’” she added a short time later, reading from the shooter’s Twitter bio.

In contrast, CBS and NBC seemed hell-bent on running away as fast as they can and then hide from the fact that the FBI discovered he followed “violent ideologies.”

At no point during the segment on the CBS Evening News did anchor Norah O’Donnell or correspondent Dean Reynolds report that the Dayton shooter subscribed to “violent ideologies.” The closest they came to admitting it was this soundbite from the Dayton police chief:

CHIEF RICHARD BIEHL: Materials reviewed thus far, revealed the individual had a history of obsession with violent ideations, to include mess shootings and had expressed a desire commit a mass shooting.

NBC Nightly News, on the other hand, allowed a soundbite of an FBI special agent explaining it during a press conference. “We have uncovered evidence throughout the course of our investigation that the shooter was exploring violent ideologies,” Special Agent Todd Wickerham told the press.

ABC played a soundbite of Wickerham, just not that one.

Though, NBC correspondent Gabe Gutierrez did reiterate that the shooter was obsessed with mass shootings and “performed with an extreme heavy metal band known for sexually violent lyrics.”

Unfortunately, ABC still didn’t mention the fact that the shooter was a big fan of 2020 presidential hopeful Senator Elizabeth Warren (D-MA), Antifa, or his anti-gun stance.

DAVID MUIR: Good evening and it's great to have you with us here on a Tuesday night. Of course, we have just back from El Paso tonight, and we're following several stories as we come on. First, to Dayton, Ohio, tonight. Late today what the FBI revealed there, saying the shooter might have been motivated by violent ideology. Of course, those images; people running in panic from the gunman’s bullets. The gunman followed. The chaos and terror inside that bar.

And tonight, right here, the new clues revealed about the gunman, as we hear from a former girlfriend who said herself there were red flags. What he was fascinated with. ABC's Eva Pilgrim leads us off from Dayton tonight.

EVA PILGRIM: Tonight, stories from heroism from inside the Dayton bar where the gunman's rampage ended. Dylan Arnold started recording when he heard the gunfire.

CHIEF RICHARD BIEHL (Dayton Police Department): The individual had a history of obsession with violent ideations; to include mass shootings and had expressed a desire to commit a mass shooting.

PILGRIM: ABC News has also learned of a now-deleted Twitter account believed to be linked to Betts, describing himself as an “anime fan”, a “metalhead”, and a “leftist”.

PILGRIM: Ohio's governor who was drowned out by a crowd in the wake of the shooting, now says he's calling for legislation requiring background checks for nearly all gun sales and other reforms.

GOV. MIKE DEWINE: We must do something. And that is exactly what we are going to do.

MUIR: And Eva Pilgrim joins us live tonight from Dayton, Ohio. And Eva, the FBI revealing today that they have evidence now that the gunman was interested in violent ideologies, and they're asking now for the public's help?

PILGRIM: That's right, David. The FBI is investigating if this shooter had any help. They’re also wanting to talk to anyone who might have known that he was interested in mass shootings. Now, if you had video of this shooting, the FBI would like for you to submit that on their website. David?

MUIR: It does seem like there were so many red flags here. Eva pilgrim leading us off. Eva, thank you.

NORAH O’DONNELL: Good evening. Now tonight as we come on the air, we’ve learned some disturbing information about what is happening in America. The FBI now has opened investigations in all three recent mass shootings as there is growing concern that violent extremism is a top domestic terrorism threat.

Today the F.B.I. Said it was opening a domestic terrorism case in Gilroy, California, in addition to the massacre in El Paso, Texas. And now the FBI says the Dayton, Ohio, gunman was obsessed with mass shootings and wanted to commit one. National correspondent Dean Reynolds leads off our coverage tonight.

DEAN REYNOLDS: The investigation of the Sunday morning massacre has given authorities the picture of a dangerous young man with a lust for bloodshed.

CHIEF RICHARD BIEHL (Dayton Police Department): Materials reviewed thus far, revealed the individual had a history of obsession with violent ideations, to include mess shootings and had expressed a desire commit a mass shooting.

REYNOLDS: Today the FBI joined the expanding investigation to determine who and what may have influenced 24-year-old Connor Betts. [Gunfire] And why he chose the Dayton entertainment district for his attack. FBI Special Agent Todd Wickerham.

TODD WICKERHAM: We have got to try to understand the best we can why this horrific attack happened.

REYNOLDS: Much of the Betts profile includes recollections from those who knew him, including ex-girlfriend Adelia Johnson.

ADELIA JOHNSON: He was interested in what makes terrible people do terrible things. [Transitions] I didn't think he would go shoot strangers.

REYNOLDS: Friends of the shooter say this was not about race or religion, but what it was about is proving elusive, because so far no one has been able to establish a motive. Norah?

O’DONNELL: Now the FBI will work to help find that out. Dean Reynolds, thank you.

LESTER HOLT: And tonight the FBI has also opened a federal investigation into the mass shooting in Dayton. This comes as the gunman's ex-girlfriend tells NBC News there were troubling signs. Gabe Gutierrez has more and we should warn you some of this new video of the rampage is quite disturbing.

GABE GUTIERREZ: These were the panic moments inside the crowded Dayton bar. People diving for cover before police quickly took the gunman down. Tonight a growing mystery into why the 24-year-old opened fire.

GUTIERREZ: Adelia Johnson tells us she recently dated the gunman for a few months after bonding over their shared struggle with mental

JOHNSON: People go every day being perfectly fine without having mental illness, me included. And he just -- he got the short end of the stick. No support system.

GUTIERREZ: She now believes there were red flags. She says he showed her video of a mass shooting on their first date. Later took her to a gun range and performed with an extreme heavy metal band known for sexually violent lyrics. So far police have not determined a clear motive for the massacre, but --

TODD WICKERHAM: We have uncovered evidence throughout the course of our investigation that the shooter was exploring violent ideologies.

GUTIERREZ: Here in Dayton's Oregon district, the focus is not on the shooter. Instead, the police officers who heroically stepped in to stop the bloodshed, and the nine lives cut short,

GUTIERREZ: The FBI says there is no evidence that the gunman here in Dayton was influenced by the rampage in El Paso just hours earlier. Tomorrow President Trump is expected to visit this area as well as El Paso, Lester.

HOLT All right, Gabe, thank you.