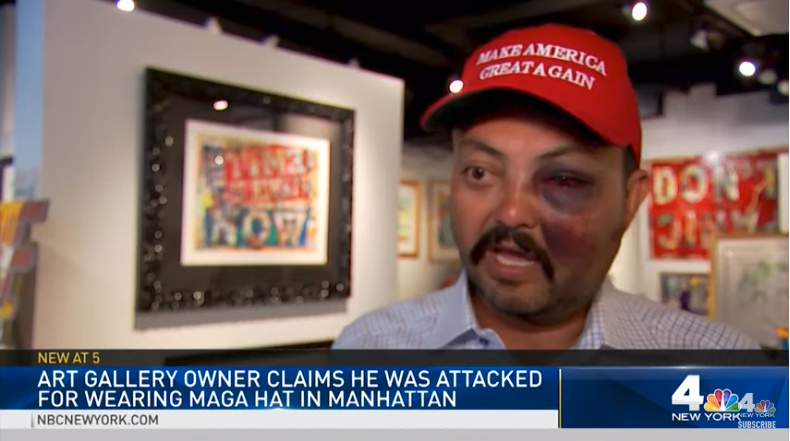 Early Tuesday evening, Trump supporter and art gallery owner Jahangir Turan was walking down a street in Manhattan, New York wearing a “Make America Great Again” hat he had purchased at Trump Tower, when he was allegedly assaulted in broad daylight by a group of teens. News of the attack only grabbed national attention on Thursday.

Instead of reporting on the possible politically motivated attack in their own backyards, the flagship evening newscasts of ABC, CBS, and NBC were too busy suggesting Trump supporters at a rally in Cincinnati, Ohio that night were going to chant racist slogans.

While the networks were ignoring Turan’s swollen face, messed up eye, and fractured cheekbone, their local affiliates were covering his recounting of the assault. WNBC reported:

With a swollen face, bruises and black eye Jahangir “John” Turan -- owner of the David Parker Gallery which sells art work by Andy Warhol, Salvador Dalí and Joan Miró, among other celebrated artists -- says he was on his way to a meeting with a client after buying a MAGA hat when he came across a group of “kids,” who he described as being 18 to 20 years old, while walking on Canal Street toward West Broadway.

“Officials said 42-year-old Jahangir Turan told police he was on Canal Street in SoHo around 6:30 p.m. Tuesday when was struck in the head from behind,” reported WABC. “Turan said he was leaving the N train wearing a MAGA hat when a group of teenagers yelled "F*** Trump[”] and attacked him.”

“That’s kind of ridiculous, to get beat up like this for wearing a hat,” he said. “I wanted to put it on my TV stand. I had no intentions of wearing it in New York City, because it’s dangerous to wear a hat like this in New York City.”

According to the local Daily News newspaper, Turan had turned down medical treatment at the scene, “But he’s irate that three days later, police had yet to track down any suspects.” “I felt angry after Tuesday and Wednesday, when I didn’t see them doing anything. Two days, no arrests. I think some of these cops are anti-Trump,” Turan explained.

Many on social media were pointing out the hypocrisy of the liberal media for instinctually pouncing on the alleged assault of former Empire actor Jussie Smollett by alleged Trump supporters, which turned out to a massive hoax, and their silence on this latest attack.

Now, Smollett was more famous that Turan. But it’s worth pointing out that the combined initial network coverage of Smollett’s accusation was four minutes and 39 seconds. But zero, for Turan.

Ignoring politically motivated attacks on conservatives and Republicans was normal for the networks. CBS and NBC couldn’t be bothered to report on the beating of conservative journalist Andy Ngo by Antifa terrorists, which left him with a brain injury.

During the midterms last year, the networks turned a blind eye to a GOP headquarters in Florida getting shot up and the attacks against GOP candidates and lawmakers.