CBS Embarrasses Themselves With ‘Fact-Check’: People Want to Live in Baltimore 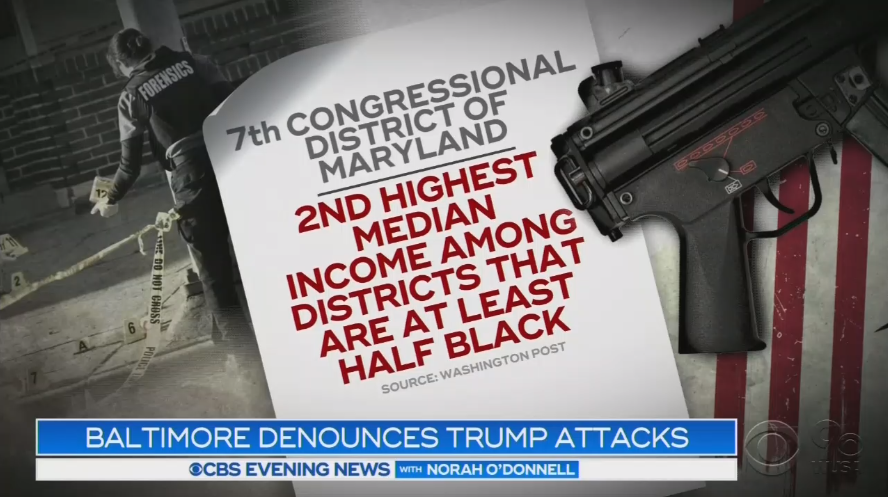 During Monday’s CBS Evening News, floundering new anchor Norah O’Donnell touted a report by correspondent Jeff Pegues as a “fact-check” of the President’s claim that Baltimore was a city “no human being would want to live.” A “fact-check” that failed miserably.

Ever since President Trump correctly identified Baltimore, Maryland as a city suffering from decades of terrible Democratic policies and mismanagement, the liberal media have been desperately trying to downplay the city’s rampant crime and rodent problem and spin it as a testament to their policy positions.

To his credit, Pegues reported Congressman Elijah Cumming’s (D) district experienced “more than 4,300 shootings” since 2014. “[T]he third highest in the nation,” he added. Meanwhile, ABC, NBC, Telemundo, and Univision have ignored Baltimore’s crime epidemic. All three have largely ignored the six people killed and 13 shot in the city over the weekend.

But Pegues posed people wanted to live there because “the district ranks in the 61st percentile on immediate household income and has the second-highest median income among districts that are at least half black.”

That’s clearly not a fact-check at all, but rather just Pegues making the argument that people in the city have higher than normal incomes, THUS people should want to live there.

But a more accurate fact-check would involve looking at how people were voting with their feet, as it were, and moving out of the city. That analysis obliterates Pegues’s spin artistry.

Before we get to that. Pegues spoke with The Baltimore Sun editorial editor Andrew Greene and boasted about the local paper called President Trump a “vermin” (click “expand”):

PEGUES: After Mr. Trump called Baltimore a “disgusting rat, rodent-infested mess”, The Baltimore Sun's editorial page wrote, "It's better to have some vermin living in your neighborhood than to be one." Andrew Greene is the paper's editorial editor.

Listen, you called him a rat.

ANDREW GREENE: Well, that's true. He’s called a lot of people a lot of things. That's not something we take lightly.

That’s important to preface because back in April of this year, The Baltimore Sun published an article detailing a census estimate that showed the city was continuing to hemorrhage residents. “Baltimore sees biggest population loss in single year since 2001, Census estimates show,” the headline read.

According to The Sun, the city had lost 1.2 percent of its population in just one year. “The decline, which puts Baltimore’s estimated population at 602,495 as of July 1, 2018, is the biggest loss the city has experienced in a single year since 2001. It also marks the fourth year in a row in which the city’s population has fallen, starting in 2015.”

“Between July 2017 and July 2018, Baltimore lost more than 10,000 residents because more people moved out of the city to other cities and counties than came in from elsewhere in the U.S.,” the paper added.

The paper also admitted that Baltimore officials petitioned the Census Bureau in 2007 to revise their 2006 estimate upward. “The new number implied a slight increase in the city’s population after a half-century of decline — a “reversal of fortune” for the city, in the words of then-Mayor Sheila Dixon,” they wrote.

AND, “Since July 2010, Baltimore has lost more than 18,500 residents, or 3% of its population, while its neighbors have seen population gains.”

It doesn’t sound like people want to live there.

NORAH O’DONNELL: Now to the feud between the President and one of the most prominent African Americans in Congress: Elijah Cummings. It comes two weeks after the President's attacks on four freshman congresswomen of color. Jeff Pegues is in Cummings' Baltimore district, but we begin with Nancy Cordes on Capitol Hill.

NANCY CORDES: Caught in another controversy over race, the White House released photos this afternoon of the President's meeting with inner-city pastors. Alvita King is Dr. Martin Luther King, Jr.'s, niece and describes herself as a creative evangelist.

ALVITA KING: The President is concerned about the whole nation, about everybody in the nation.

AL SHARPTON: He had a particular venom for blacks and people of color.

CORDES: The Reverend Al Sharpton slammed the President today on behalf of an outraged city as Mr. Trump called Sharpton a “conman” who “hates whites and cops”.

SHARPTON: If he really thought I was a conman, he would be nominating me for his cabinet.

O’DONNELL: There was angry reaction in Baltimore to the President's attack. Jeff Pegues has that along with the fact check.

PEGUES: No one here denies the charmed city has had tough times. Since 2014, there have been more than 4,300 shootings in Congressman Elijah Cummings' district, the third highest in the nation. But far from being a place “no human being would want to live”, as the President said. The district ranks in the 61st percentile on immediate household income and has the second highest median income among districts that are at least half black.

Do you think those tweets were racist?

BRANDON SCOTT (Baltimore City Council president): Yes. He attacked Detroit. He attacked Chicago. He attacked Baltimore. These are cities that are known for their African Americans.

PEGUES: After Mr. Trump called Baltimore a “disgusting rat, rodent infested mess”, The Baltimore Sun's editorial page wrote, "It's better to have some vermin living in your neighborhood than to be one." Andrew Greene is the paper's editorial editor.

Listen, you called him a rat.

ANDREW GREENE: Well, that's true. He’s called a lot of people a lot of things. That's not something we take lightly.

PEGUES: The Baltimore area’s biggest names in sports, business, and theater have been coming to the city’s defense. Baltimore’s own John Waters, famous for the film "Hairspray" dared President Trump to, quote, "See if you have the nerve to say it in person."