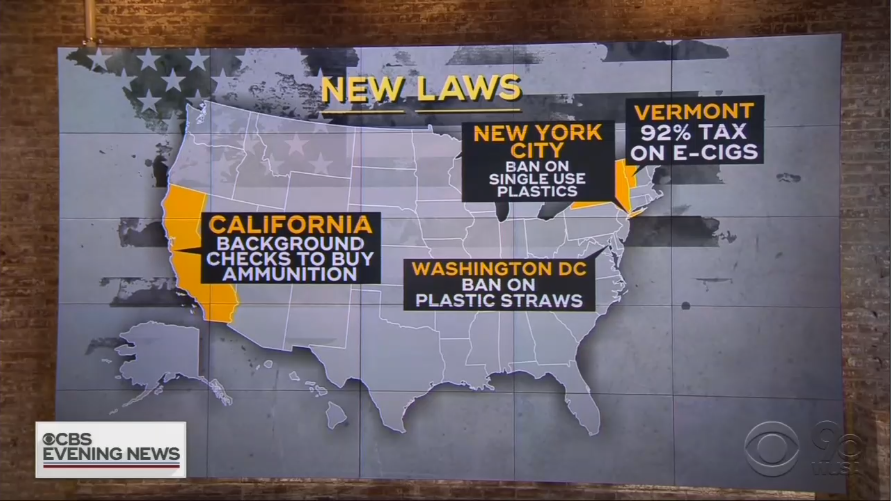 There’s nothing liberal politicians love more than increasing the size of government, enacting overbearing regulations, and limiting the choices of consumers. Those policies seemed to be fine with CBS News because Evening News fill-in anchor, David Begnaud spent some time during Monday’s newscast touting blue state and city laws that were ready to take effect.

“Across the country today, a flurry of new laws, some catching nationwide attention,” Begnaud bragged at the top of the news brief.

One of the more recent and popular virtue-signaling policies of the Democratic Party was the banning of “single-use” plastic objects. So, it’s no surprise that Begnaud would hype how “New York City has banned agencies from buying single-use plastics,” and Washington, D.C. where “there’s a ban on plastic straws.”

There will probably be another one of these kinds of reports in March 2020 when New York’s statewide ban goes into effect. “New York State lawmakers have agreed to impose a statewide ban on most types of single-use plastic bags from retail sales, changing a way of life for millions of New Yorkers as legislators seek to curb an unsightly and omnipresent source of litter,” praised The New York Times.

Begnaud also highlighted Senator Bernie Sanders’ home state of Vermont where “they slapped a 92 percent tax on e-cigarettes” in an effort to “curb vaping.”

The first raises the legal age for purchasing and using cigarettes, e-cigarettes and tobacco products to 21 from 18. The second restricts retail and internet sales of "tobacco products, tobacco substitutes, substances containing nicotine or otherwise intended for use with a tobacco substitute, or tobacco paraphernalia" unless the vendor is a licensed wholesale dealer or has purchased the products from a licensed wholesale dealer.

“State Rep. George Till, who sponsored the tax increase bill, said the measure will help keep tobacco products out of the hands of kids, who are most affected by price hikes,” CBS reported. But what about low-income folks? This seemed to hurt them just like soda taxes did.

To round out the news brief with the liberal media’s anti-Second Amendment agenda, Begnaud boasted that “in California, background checks are now required for the purchase of ammunition.” While CBS was cheering on California’s background checks for bullets, the AP rained on the parade.

According to an AP report, “California’s new ammunition background check law began Monday not with a bang but with a whimper from dealers who reported delays and glitches with the state’s online system.”

It added : “Vendors the length of California were frustrated by online snags including their inability to readily log in to the new system that is supposed to let them background-check customers with the state, though some put it down to a predicable [sic] learning curve.”

Meanwhile, California already had some of the toughest gun laws in the country. So, this law was likely to have no effect on gun violence.

DAVID BEGNAUD: Across the country today, a flurry of new laws, some catching nationwide attention. We will begin in Vermont, where they’re hoping to curb vaping. They slapped a 92 percent tax on e-cigarettes. New York City has banned agencies from buying single-use plastics. In Washington, D.C., there’s a ban on plastic straws. And in California, background checks are now required for the purchase of ammunition.