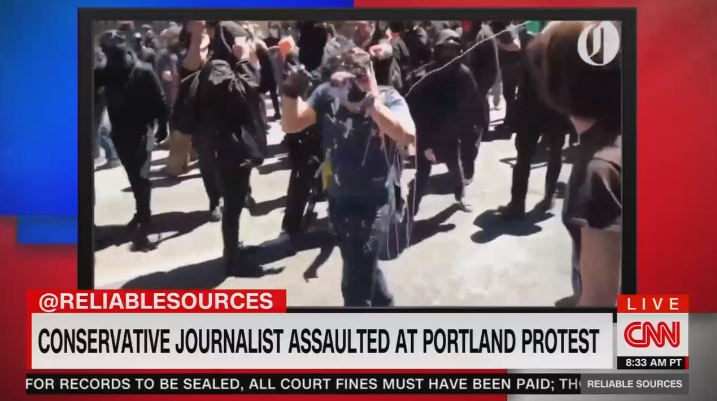 For years now, CNN has claimed President Trump has made America a dangerous place for journalists, it’s even the topic of chief White House correspondent Jim Acosta’s new book. It’s a narrative they sowed to tar Trump supporters and anyone who would question their motives. But on Saturday it was “right-wing” journalist Andy Ngo who was viciously assaulted by left-wing Antifa terrorists.

CNN media reporter Brian Stelter took 47 seconds out of his hour-long Sunday program, Reliable Sources, to condemn the attack. To his credit, the sentiment was right but the time allocated to the topic was pitiful, especially considering Stelter allowed almost four minutes (3 minutes, 57 seconds) to the shutting down of a small Ohio newspaper.

On top of that, Stelter utterly failed to call out or condemn his CNN colleagues Chris Cuomo, Don Lemon, and Kamau Bell, who have used their programs to preach on behalf of Antifa.

“He has been out there in the past. He’s been covering protests in Portland for quite some time. His critics say he's there to cause trouble, but that's unacceptable. The idea that he would be attacked, that he would be bloodied in that way, unacceptable, period,” Stelter rightly declared, speaking of Ngo.

Adding: “And it’s important that everyone make that clear. Even left-wing critics who don’t like him and things like that.”

Stelter was correct, this kind of attack on a journalist (where the victim was hospitalized with a brain hemorrhage) was not acceptable period. But where was the condemnation of his colleagues?

Last year, Prime Time host Chris Cuomo argued that Antifa had “morality” on their side. “But I argue to you tonight, all punches are not equal morally,” Cuomo stated. “But fighting hate is right. And in a clash between hate and those who oppose it, those who oppose it are on the side of right.” What kind of twisted logic was that?

This year, Cuomo has suggested that Antifa fought for a “good cause”. What kind of cause was worth enough to brutalize a journalist?

A May edition of Bell’s United Shades of America, CNN normalized Antifa violence by finding humor in one member who carries around a large pocket knife and pink brass knuckles.

Then there was Lemon who told Cuomo that “sometimes you can't fight by praising them or being nice to them. You gotta fight fire with fire…” in support of Antifa’s tactics.

Stelter often revels in seeing public infighting among Fox News hosts with different opinions, as if it was a problem with the network’s messaging. In reality, it shows that they’re not all of the same mindset and Fox News seems tolerant of the debate. Then why doesn’t Stelter call out his colleagues? Perhaps CNN frowns on that kind of serious public debate between hosts.

BRIAN STELTER: One more important story you need to know about before we take a break.

This is a protest that turned violent against a member of the media in Portland, Oregon this weekend. Conservative journalist Andy Ngo was out there covering rival protests on Saturday, Antifa on one side right-wing figures on the other side. But as the demonstrations clashed, protesters— it appears to be Antifa protesters then attacked Ngo.

And it’s important that everyone make that clear. Even left-wing critics who don’t like him and things like that. There's much we don't know yet about all the circumstances but disturbing to see that in Portland.