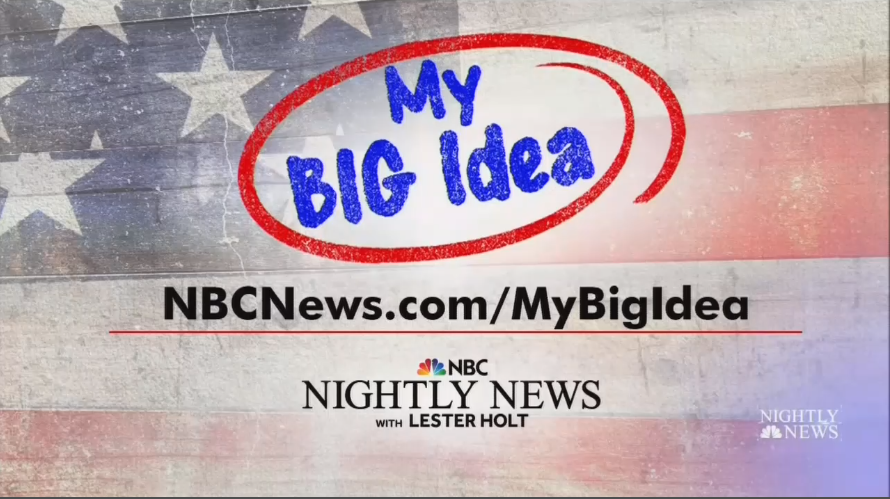 Over a two-week period ahead of the first set of 2020 Democratic debates (June 10 – 23), NBC Nightly News ran a daily series they dubbed “My Big Idea,” in which they provided a platform to aid the candidates in reaching the public with their policy proposals. Something NBC didn't do for the Republican Party candidates in 2015 when they had their own large field.

Almost nightly, anchor Lester Holt would openly admit that the 14-part series was essentially a Democratic propaganda mill with NBC correspondent Harry Smith making the policy pitches on behalf of the candidates. Smith also failed to provide any serious pushback or critical analysis of the policies he was helping to push.

The policies largely fell into broad categories (“free” stuff, increasing federal spending, tearing up the constitution, and stuff President Trump was already doing), but Smith treated them all the same way: with kid gloves.

The first question of the series went to Senator Bernie Sanders when Smith wanted to know if Medicare for all actually meant for all. “Americans would pay nothing at the doctor’s office, no co-pays at the E.R.” he later touted. And like a late-night infomercial spokesperson shouting “wait there’s more”, he boasted that Sanders was “even throwing in dental and vision care.”

Despite admitting that the cost was “trillions, with a T”, Smith didn’t bat an eye at the price but was more concerned with how Sanders would respond to Republicans who would call it socialism.

Smith touted how Senator Warren’s plan “would cancel up to $50,000 of student debt for 42 million Americans. She also wants free college at public institutions.”

The most critical Smith got was when he weakly asked about whether or not her plan was “a play for millennials” and how some would call it “wealth redistribution.” Both answers he allowed her to talk around the facts.

One of the most ridiculous of the so-called “big ideas” came from businessman Andrew Yang, who promised to give out $1,000 to everyone who wanted it each month if he was elected. “Yang's program, a thousand dollars a month for every American ages 18 and older would be opt-in. People could choose to stick with other social programs,” Smith said.

The only question Smith shared from his interview was about “how would it work literally?” And he let Yang get away with saying it would work because he’d be president and people would be excited.

Abolishing the Electoral College would upend our Constitution’s built-in mechanisms from protecting the population from the tyranny of the majority and not “strengthen American democracy” like Buttigieg alleged.

Smith didn’t share footage of himself questioning the South Bend Mayor, but he did chide: “The presidency decided by popular vote easy to embrace for Democrats, but Republicans defending rural states red state will surely recoil.”

In that report, Smith cheerfully told viewers that “O’Rourke also wants to get rid of PACs and big money in politics,” a standard left-wing talking point. Meanwhile, the failed Senate candidate was one of the most successful fundraisers in 2018 and didn’t share any of it with other members of his party.

In extended coverage of the interview on NBC News Now, Smith cued up O’Rourke to smear all Republicans as “guilty of voter suppression”. In his response, O’Rourke repeated the debunked liberal lie that the 2018 Georgia gubernatorial race was “a stolen election”.

Smith also gushed about how O’Rourke was “the viral media darling of the 2018 midterms”, and suggested the candidate somehow still had “momentum” from his “almost successful challenge against Senator Ted Cruz”.

Despite the fact that the Montana Governor had not met the requirements to make it onto the NBC debate stage, the network still allowed him to share his “Big Idea” of restricting free speech in elections.

“As president, Bullock would sign an executive order requiring corporations to disclose money spent toward elections and he wants a constitutional amendment overturning Citizens United, the Supreme Court ruling that allows for nearly unlimited spending in politics,” Smith boasted on Bullock’s behalf.

Smith’s reporting there used the standard issue, liberal spin against the Citizens United ruling. What he failed to mention was that the ruling reaffirmed that political contributions were, in fact, an exercise of free speech. Bullock’s desired “constitutional amendment” would essentially gut the First Amendment.

Among the other Democratic policies NBC pushed was New Jersey Senator Cory Booker’s baby bonds (which they ignored a shooting to promote), Washington state Governor Jay Inslee’s plan to “defeat the climate crisis,” California Senator Kamala Harris’s goal to jack up the death tax to pay teachers more, and couple “Big Ideas” that were already being pursued by President Trump.