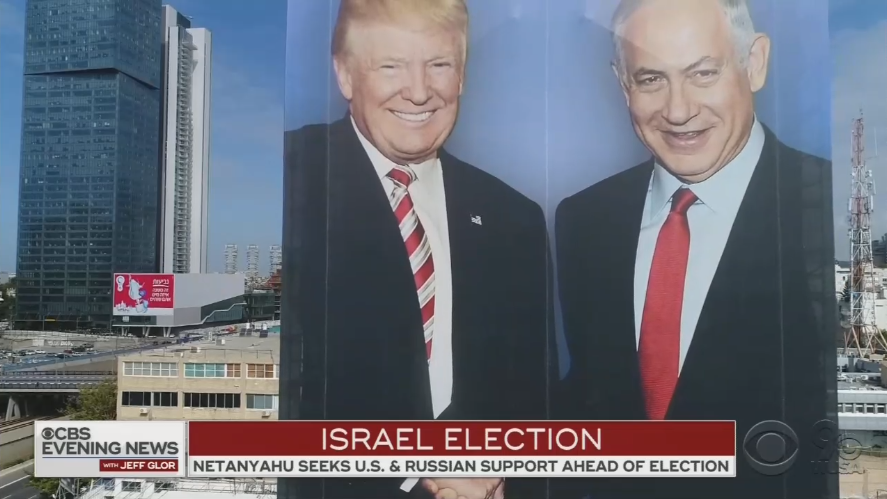 It was the height of Russia’s meddling the 2016 election, when news broke that President Barack Obama spent taxpayer money, to the tune of $350,000, on an Israeli organization that was mobilizing against Israeli Prime Minister Benjamin Netanyahu, during the 2015 election. The news was largely ignored by the liberal media and was omitted by the broadcast networks. Fast-forward to 2019, and CBS Evening News was bemoaning how Netanyahu was inserting President Trump into the current election.

Dubbing it “the Trump effect”, CBS News correspondent Seth Doane began his Monday segment by sharing their displeasure with a massive billboard of Trump and Netanyahu. “There’s nothing subtle about this five-story-high billboard. Benjamin Netanyahu has practically put President Trump on the ballot in this election,” he reported.

Doane noted Netanyahu’s excitement over the U.S.’s recognition of the Golan Heights as part of Israel, suggesting Israelis simply “seized” the land “from Syria in 1967.” As NewsBusters documented last month, the broadcast networks (CBS included) refused to make note that the territory was won as a result of the infamous Six-Day War; when Israel fought off the combined forces of Egypt, Jordan, and Syria, because they didn’t recognize Israel’s right to exist.

CBS also decried Netanyahu’s campaign promise to annex parts of the West Bank, “which most of the world considers occupied territory,” Doane objected. Of course, this was one of the networks that mourned for Hamas terrorists after they sought to breach the border fence and attack civilians. The liberal media seems to treat all of Israel as occupied territory.

The CBS reporter told viewers that they witnessed “the Trump effect in a Tel Aviv market” when an Israeli woman shared her view about the President. “For Israel he's good,” she said.

He also pestered Netanyahu’s opponent, former Israeli General Benny Gantz, with a question about Trump’s influence in the race. “I think the relationship between people is important, but the relationship between countries is even more so,” Gantz said. CBS ignored that fact that Gantz supported Trump’s move to recognize the Golan Heights as Israel.

Looking back into NewsBusters records, CBS News has not been a fan of Netanyahu. In the lead up to the 2015 election, the Israeli Prime Minister delivered a speech before a joint session of Congress, which they decried as a “controversial speech”. “Netanyahu did an end-run around President Obama today”, whined then-CBS co-host Charlie Rose.

Later that month, the network cheered when a former top Obama aide went to Israel to organize an American-style get out the vote effort against Netanyahu. “[They] hired Jeremy Bird who ran the Obama campaign ground game in 2008 and 2012," boasted This Morning reporter Barry Petersen at the time.

Almost immediately following Netanyahu’s victory, then-CBS Evening News anchor Scott Pelley declared that Netanyahu’s “hardline rhetoric” had “help[ed] him win reelection, but at a price”. That price was peace in the Middle East and more “tension” with the U.S. (a.k.a. the Obama administration).

JEFF GLOR: In just a few hours, Israeli voters will go to the polls. Prime Minister Benjamin Netanyahu faces a tight race as he seeks a fifth term. And he's getting a lot of support from outside Israel. Seth Doane is in Jerusalem.

SETH DOANE: There’s nothing subtle about this five-story-high billboard. Benjamin Netanyahu has practically put President Trump on the ballot in this election.

DOANE: The Israeli Prime Minister has underlined the recent U.S. recognition of Israel's sovereignty over the Golan Heights, seized from Syria in 1967. Another recent campaign stop, Moscow, where President Vladimir Putin arranged the return of the remains of an Israeli soldier missing for 37 years.

DOANE: Barak Ravid, a political analyst at Israel's Channel 13, said Netanyahu was trying to fire up his base this weekend by announcing he’d annex West Bank settlement, which most of the world considers occupied territory. What Netanyahu saw is that after President Trump recognized Israeli sovereignty in the Golan Heights, he understood that he has the possibility now to do something similar in the West Bank.

DOANE: We saw the Trump effect in a Tel Aviv market. What do you think about President Trump?

President Trump figures very prominently in this campaign. His relationship with Prime Minister Netanyahu is certainly seen as an advantage here. Is it a disadvantage for you?

DOANE: Tomorrow's election is first step, Jeff. Then the question is which candidate can form a coalition government.