CBS This Morning journalist Nancy Cordes on Tuesday parroted White House spin on Benjamin Netanyahu's address before Congress. The reporter repeated that the President "said the speech creates the appearance of a political endorsement for Netanyahu, who is up for reelection later this month."

She then featured a clip of Barack Obama noting that the Israeli Prime Minister is up for reelection a few weeks. Obama insisted, "It makes it look like we are taking sides." Cordes left out the fact that a top Obama operative has taken sides. Jeremy Bird, the President's 2012 national field director, is over in Israel trying to defeat Netanyahu. 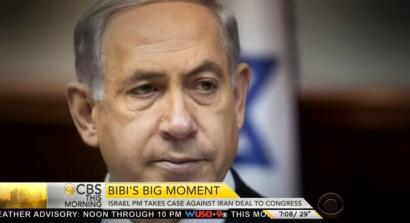 While White House officials were threatening Israel, the news broke that Obama’s 2012 national field director, Jeremy Bird, was headed to Tel Aviv to manage a grass-roots campaign to oust Netanyahu. Bird would not be working to defeat Netanyahu if he thought Obama opposed it. Can you imagine Karl Rove going to London while George W. Bush was in office to help conservatives oust Prime Minister Tony Blair? It further emerged that the group behind Bird’s anti-Netanyahu effort has received State Department funding and lists the State Department as a “partner” on its Web site. Netanyahu’s Likud Party held a news conference to accuse its opponents of accepting foreign funds in violation of Israeli election laws, and Israeli newspapers published headlines on the “Obama-Labor link .”

In the context of the anonymous White House threats, having a top Obama campaign official in Israel actively working to defeat Netanyahu is naturally perceived as interference.

Cordes should have mentioned this, but didn't. Instead, she featured Democratic Senator Kristen Gillibrand complaining, "I think the way this invitation was offered by the Speaker is inappropriate. Partisan politics should never be a part of the foreign policy issue." No Republican voices were featured.

Co-host Charlie Rose introduced the story by referring to Netanyahu's "controversial" speech. Cordes insisted that Republican Speaker John Boehner "did not consult with the White House." Over on Good Morning America, Amy Robach chided, "Well, Israeli Prime Minister Benjamin Netanyahu delivers a controversial speech to Congress today." She added, "The invitation came from Republicans who did not inform the White House."

A transcript of the March 3 CBS This Morning segment is below: 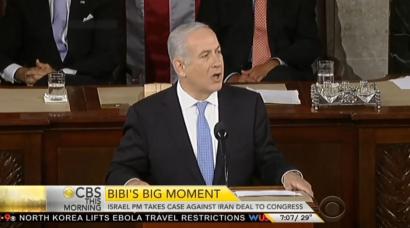 GAYLE KING: A CBS News poll out this morning finds about half of Americans consider Israel to be a U.S. ally. That number was lower in 2011. Only 15 percent see Israel as unfriendly or an enemy. Nancy Cordes is on Capitol Hill where an overflow crowd is expected for the Israeli leader later today. Nancy, good morning.

NANCY CORDES: Good morning to you. I'm standing at the entrance to the House chamber where Netanyahu will address a rare joint session of Congress in just a few hours. And behind me is Statuary Hall. They are setting up for a luncheon in his honor. The fact that this speech is happening has divided Washington. That doesn't mean that everyone isn't paying attention to what he has to say.

CORDES: Netanyahu has been asked to speak to Congress twice before, but never under these circumstances. The prime minister downplayed the controversy in a Monday speech before the pro-Israel lobbying group AIPAC.

NETANYAHU: The last thing that I would want is for Israel to become a partisan issue and I regret that some people have misperceived my visit here this week as doing that.

CORDES: Netanyahu was invited by Republican House Speaker John Boehner who did not consult with the White House. Like many Republicans, Netanyahu opposes the U.S.-backed nuclear negotiations with Iran and that has strained his relationship with President Obama, who said the speech creates the appearance of a political endorsement for Netanyahu, who is up for reelection later this month.

BARACK OBAMA: As a matter of policy we think it is a mistake for the prime minister of any country to come to speak before Congress a few weeks before they are about to have an election. It makes it look like we are taking sides.

CORDES: As a result, at least 30 congressional Democrats are boycotting today's address. Half a dozen of them are Jewish. But Most Democrats, like New York senator Kirsten Gillibrand plan to hear him out.

KIRSTEN GILLIBRAND: I think the way this invitation was offered by the Speaker is inappropriate. Partisan politics should never be a part of the foreign policy issue. Regardless, I will go hear what the prime minister has to say.

CORDES: And because Washington loves a controversy the demand for tickets is intense. In fact, Speaker Boehner's spokesman said the only way there could be more demand is if Katy Perry and Taylor Swift were doing a concert together wearing black and blue and gold and white dresses accompanied by sharks and llamas.