Lies: Nets Dragged Hyde-Smith Through the Mud to Aid Dem 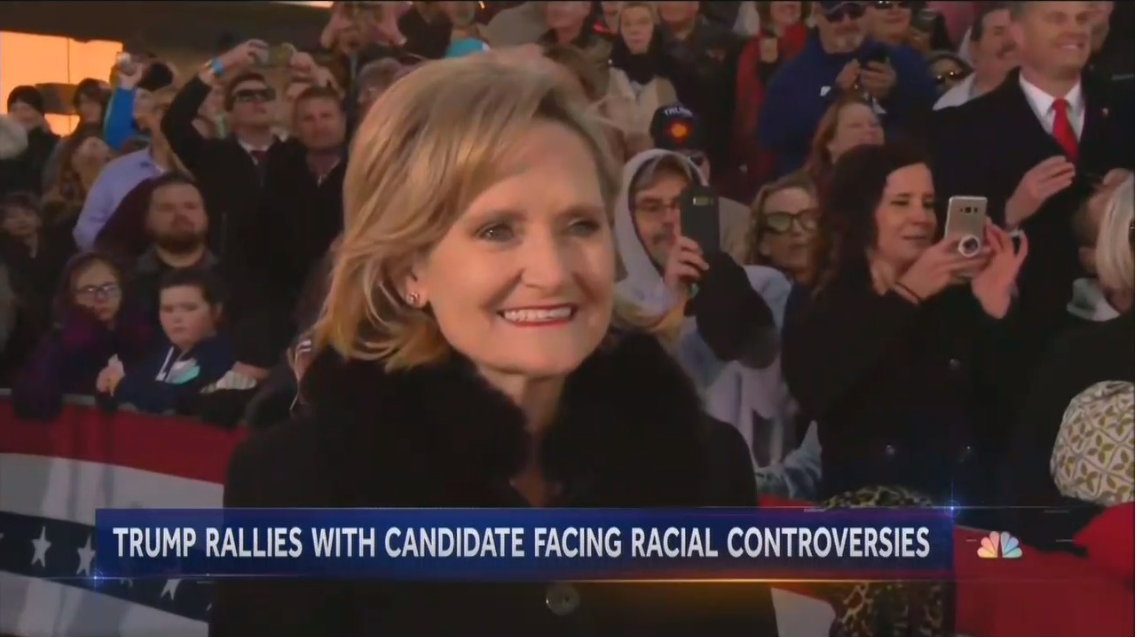 The day before the Mississippi Senate runoff, the liberal media were trying desperately to drag Democrat Mike Espy over the finish line by dragging GOP Senator Cindy Hyde-Smith through the mud. They’re putting all their effort into smearing Hyde-Smith as a racist and the product of a racist state. During their Monday evening newscasts, ABC, CBS, and NBC did everything they could to attack her, with one going so far as to attack her teenage daughter with lies about attending a still racially segregated school.

Earlier that day, nooses were found hanging from a tree outside the Mississippi state house with signs attacking Hyde-Smith. But on NBC Nightly News, White House correspondent Kristen Welker provided no context. “And this morning, a disturbing reminder, this race has become all about race, two nooses found at the state capital,” she said, essentially leaving up to viewers to assume it was a threat against Democratic candidate Mike Espy, who is African-American.

On ABC’s World News Tonight, it wasn’t any better. Chief national affairs correspondent Tom Llamas picked one of the most ambiguous sign to read to viewers. “Nooses found hanging today outside the Mississippi state capital, along with these signs. One reading We're hanging nooses to remind people that times haven't changed,’” he read.

Llamas also asserted that the nooses appeared after Hyde-Smith “embrace[d] the state's racist past.” But meanwhile, on CBS Evening News, correspondent Ed O’Keefe noted that the nooses were “hung by critics of Senator Hyde-Smith.” Although, O’Keefe did lie in claiming her comment about public hangings was “racially charged.”

All three of the broadcast networks continued to push twisted accusations that a joke Hyde-Smith made about public hangings was about lynching African-Americans. They also pointed to a Facebook photo and suggested she was a Confederate sympathizer because she once visited a Mississippi museum and complimented their exhibits.

“A photo also surfaced from 2014 showing Hyde-Smith wearing a Confederate army soldier's hat. Race has always been a factor in Mississippi politics, but today another reminder of the state's troubled past,” O’Keefe chided.

While the school, Brookhaven Academy, was founded as a segregated school, it obviously no longer is because they do, in fact, have minorities in the student body. Hyde-Smith’s daughter graduated from there in 2017. Clearly, Welker and the rest of the liberal media don’t know what century we live in.

All of these lies were to create a smokescreen to hide the true controversy in the race: Espy’s deep financial ties to an African despot on trial in the International Criminal Court for crimes against humanity.

As the Media Research Center had previously noted about the lack of network coverage, Espy was paid $750,000 for lobbying work for the former president of the Ivory Coast, President Laurent Gbagbo. Espy began taking money from the despot a year after he began killing his citizens after losing an election.

DAVID MUIR: There is still a major Senate race to be decided, now three weeks after the midterms. Voters in Mississippi will head to the poles tomorrow. And tonight, the President is there, putting his support behind Republican Cindy Hyde-Smith, who has been under fire, and tonight, more of that video now surfacing during which she says if she was invited to a public hanging, quote, “I would be in the front row.” ABC's chief national affairs correspondent Tom Llamas is there tonight.

TOM LLAMAS: Nooses found hanging today outside the Mississippi state capital, along with these signs. One reading "We're hanging nooses to remind people that times haven't changed." It comes as the Republican candidate here, Senator Cindy Hyde-Smith, is facing criticism for appearing to embrace the state's racist past. She's seen in this Facebook photo from 2014 posing in a Confederate cap. Her caption, "Mississippi history at its best." And earlier this month, joking with a supporter about public hangings.

LLAMAS: The President, campaigning with Hyde-Smith today, addressed her comments on his way to Mississippi.

PRESIDENT DONALD TRUMP: She felt very badly. She certainly didn't mean that, and as I understand it, she's already apologized and very strongly.

LLAMAS: Later, apologizing in a debate against her opponent Mike Espy, the Democrat vying to become the state's first black Senator since reconstruction.

JEFF GLOR: The President hit the campaign trail today for one last time in this election cycle ahead of tomorrow's Senate run-off in Mississippi. Ed O’Keefe is following this high-stakes race.

ED O’KEEFE: President Trump threw his weight behind Republican Senator Cindy Hyde-Smith today in Tupelo, hoping to add to the Republican majority in the Senate.

O’KEEFE: But Hyde-Smith is under fire for racially charged comments recently caught on camera. Your comments offended a great number of people Senator.

CINDY HYDE-SMITH: We already have [inaudible]

O’KEEFE: Video from earlier this month shows her alongside a supporter joking that if he ever invited her to attend a public hanging, she’d sit in the front row.

O’KEEFE: A photo also surfaced from 2014 showing Hyde-Smith wearing a Confederate army soldier's hat. Race has always been a factor in Mississippi politics, but today another reminder of the state's troubled past. Two nooses were found in Jackson, hung by critics of Senator Hyde-Smith.

The Democrat in the race, Mike Espy, focused not on the nooses but on Hyde-Smith's swords.

MIKE ESPY: They were harmful and hurtful, and they were... They were hurtful to the millions of people in Mississippi of goodwill.

O’KEEFE: Mississippi voters say the controversy around Hyde-Smith's comments is on their mind.

FRANK RIVES: Cindy Hyde-Smith I find to be objectionable and a relic of the old bad south.

CHANDLER MITTS: This political stuff is ridiculous. I know what she is saying. She did not mean it in a black or slave issue. I mean, it's not fair.

GLOR: Okay, that was Ed O’Keefe reporting on the ground in Mississippi.

LESTER HOLT: President Trump is in Mississippi ahead of a high stakes Senate runoff that has been mired in controversies over race. And a shocking discovery on election eve, nooses hanging at the state capital. We get more on all this from NBC's Kristen Welker.

WELKER: And this morning, a disturbing reminder, this race has become all about race, two nooses found at the state capital. Hyde-smith came under fire for saying she'd welcome sitting in the front row of a public hanging, comments her campaign dismissed as a joke.

WELKER: And tonight a new controversy, the Jackson Free Press reporting Hyde-Smith attended an all-white segregated high school and sent her daughter to a similar school. Her challenger, Democrat Mike Espy a former congressman and cabinet member, is looking to become the first African American senator from the state in more than a century.

WELKER: To win, Espy needs African Americans to turn out in force.

MARK MURRY: Mississippi is one of the red's states in the country. The president has a 60 percent job approval rating, so his formula is very simple, getting his people out to the polls to help the Republicans win.