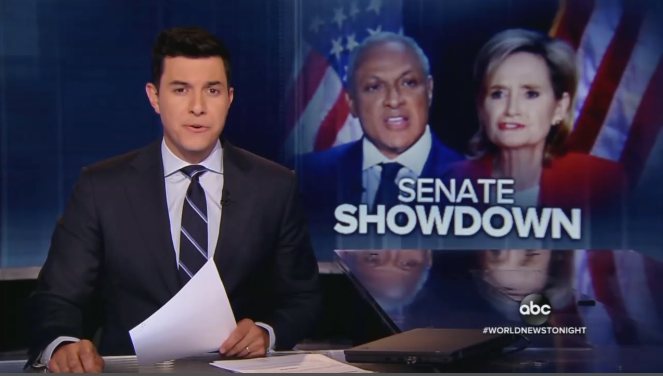 The final race of the 2018 midterms will be held next Tuesday in Mississippi between Republican favorite Cindy Hyde-Smith and Democrat Mike Espy. The liberal media have been desperately trying to turn the tide by smearing Hyde-Smith with charges of racism over mostly innocuous things. And they’ve been turning a blind eye Espy’s ties to an African despot on trial for war crimes in the International Criminal Court, and the $750,000 Espy cashed in from him. Wednesday evening was ABC’s turn.

As FoxNews.com reported last week, “A Democratic Senate hopeful in Mississippi cashed in $750,000 after lobbying on behalf of an African despot currently on trial for crimes against humanity at the International Criminal Court.”

It was a lobbying contract Espy had lied about for a long time:

But Fox News can reveal that Espy was paid $750,000 in 2011 by then Ivory Coast president Laurent Gbagbo’s government. The payment appears to contradict Espy’s previous statements that he accepted just a portion of it … Yet according to a FARA Supplemental Statement filed with the Department of Justice in 2011, not only did Espy collect the full $750,000 figure, he also dropped the contract just 15 days before it was supposed to end, contradicting his comments.

The African leader was former Ivory Coast President Laurent Gbagbo, who refused to concede in the 2010 election and unleashed “extrajudicial killings, torture, and rape of his political opponents, according to the U.S. State Department.” That timetable means Espy took the money after Gbagbo was butchering his own people.

Instead of focusing on Espy’s deals with an accused war criminal, ABC congressional correspondent Mary Bruce (who has a particular distaste for Republicans evident by her history of snide reports about them) spent a portion of Wednesday’s edition of World News Tonight trying to paint Hyde-Smith as a racist, insisting she’s been embroiled in “racially charged controversies”.

First up, was Hyde-Smith’s 2014 visit to a Mississippi museum. In a Facebook post, Hyde-Smith boasted about her trip the Jefferson Davis Home and Presidential Library and touted their displays as “Mississippi history at its best!”

Of course, Bruce treated it like Davis invited Hyde-Smith to his home for dinner. “The latest, these pictures from 2014. Hyde-Smith in a Confederate cap posing in the home and library of Confederate President Jefferson Davis. Her caption, ‘Mississippi history at its best,’” Bruce freaked.

Bruce then tried to play dumb about the history of capital punishment in America and insinuated a joke Hyde-Smith made about public hangings meant she wanted to watch a lynching of African-Americans.

When Hyde-Smith called out folks for twisting her comments to suit an agenda, Bruce also insinuated that that was racist too because she was talking about her opponent. “At a debate, Hyde-Smith also pointed a finger at her opponent, Democrat Mike Espy, who is African-American,” she said.

Bruce wrapped up the report by touting how “Espy fired right back”. “I don't know what's in your heart, but we all know what came out of your mouth. It’s given our state another black eye that we don't need,” he said.

TOM LLAMAS: And we move on now to unfinished business in the midterm elections. The Senate showdown in Mississippi. The runoff election set for this coming Tuesday. Republican Cindy Hyde-Smith, under fire in last night’s debate, apologizing to, quote, “anyone that was offended” when she made a remark some called racist about a public hanging. That apology doing little to silence critics, including some of her biggest donors. Here's ABC's Mary Bruce.

MARY BRUCE: With just days to go before the special election in Mississippi, Republican Senator Cindy Hyde-Smith is now expressing some regret after a string of racially charged controversies. The latest, these pictures from 2014. Hyde-Smith in a Confederate cap posing in the home and library of Confederate President Jefferson Davis. Her caption, "Mississippi history at its best"! And earlier this month, Hyde-Smith was caught joking with a supporter about public hangings!

CINDY HYDE-SMITH: If he invited me to a public hanging, I'd be on the front row.

BRUCE: Initially, she dug in, saying in a statement, "Any attempt to turn this into a negative connotation is ridiculous."

BRUCE: But now, a week later, and with top donors like Walmart, AT&T and Pfizer withdrawing their support and asking for their money back, Hyde-Smith is offering some apology.

HYDE-SMITH: You know, for anyone that was offended by my comments, I certainly apologize.

BRUCE: At a debate, Hyde-Smith also pointed a finger at her opponent, Democrat Mike Espy, who is African-American.

HYDE-SMITH: This comment was twisted and it was turned into a weapon to be used against me.

MIKE ESPY: I don't know what's in your heart, but we all know what came out of your mouth. It’s given our state another black eye that we don't need.

LLAMAS: And Mary Bruce joins us now from Capitol Hill. And Mary, Cindy Hyde-Smith getting a big vote of confidence from President Trump.

BRUCE: Yeah, Tom, the President has been quick to defend Hyde-Smith, saying she's done a fantastic job and it's a shame she has to go through all this. The President will be making the case for her on Monday when he heads down to Mississippi. Tom.

LLAMAS: And that election on Tuesday. All right, Mary, thank you.