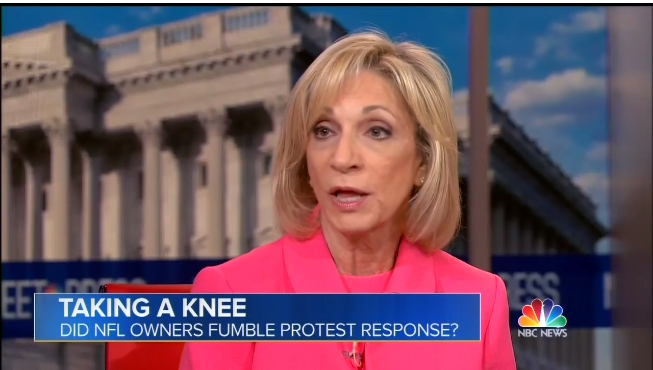 Last Tuesday, the NFL announced new rules and fines for teams who allowed their players to protest during the national anthem. Of course, the liberal media wasn’t happy with the compromise of allowing players to stay in the locker room. So during NBC’s Meet the Press on Sunday, moderator Chuck Todd and the panel were railing against President Trump and national anthem supporters for being racist who didn’t care about black people. NBC Foreign Affairs correspondent Andrea Mitchell proved her ignorance by suggesting most fans at the games didn’t stand anyway and smeared them as hypocrites.

Mitchell’s ridiculous proclamation came after The Washington Free Beacon’s Editor-in-Chief Matthew Continetti noted that the kneeling started out protests against police brutality, but quickly became about protesting Trump after he spoke up about it. “Except, on the day they announce it-- On the day they announce it, you get the video, the body cam footage, Andrea, of an NBA player, Sterling Brown, in Milwaukee showing over a parking dispute, he got tased,” Todd exclaimed.

“The hypocrisy is so profound,” Mitchell spat, effectively showing here contempt for anthem supporters. “Take a look at any NFL stadium and people are getting hot dogs, people are getting beers. They're not standing and saluting the anthem for a large part. They're not. They're distracted. They're fans at an event.” Judging by this lunacy, Mitchell had either never been to an actual sporting event ever or she was just making things up to take a political swipe.

And with the Supreme Court’s recent ruling on sports betting, I know which one I’d put my money on.

Mitchell continued by whining about how badly football flunky Colin Kaepernick was treated. “The fact the players do not have this freedom of speech and no one is thinking of Colin Kaepernick who has lost his entire career over this issue, who has been basically blackballed and can't be hired, is just outrageous.” There was no mention of Kaepernick’s hypocrisy in wearing a Che Guevara shirt while purporting to care about police brutality.

In addition to Mitchell’s grossly inaccurate statements, many on the panel were trying to suggest the NFL, Trump, and anthem supporters were staunch racists. “Basically, the owners decided they did not want to be harangued by the President of the United States every week,” asserted Washington Post columnist Eugene Robinson. “They were worried about their white working-class audience basically, that they feared responding to the President's demagoguery.”

Todd himself even got into the act by using statistics to suggest a racial bias by the NFL in favor of white fans:

“The president is taking it as one more opportunity to divide an already divided country, and it has worked in the past,” chided Amy Walter of the Cook Political Report. Of course, none of them mentioned the President’s pardon of legendary African-American boxer Jack Johnson, who was put away on trumped-up racist charges.

This entire exchange between these liberal journalists demonstrated their propensity to twist the truth into a perverted reality and their contempt for average Americans.

PS: Here's a Washington Post photo from 2013, where Mitchell was a guest of Redskins owner Daniel Snyder. They're all standing for the anthem! (See Andrea right behind Snyder, with his hand over his heart.) 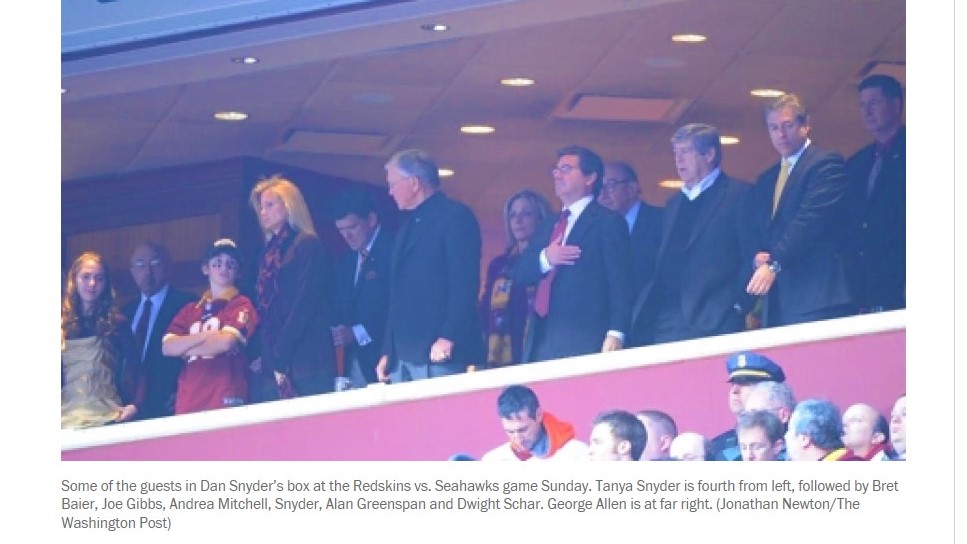