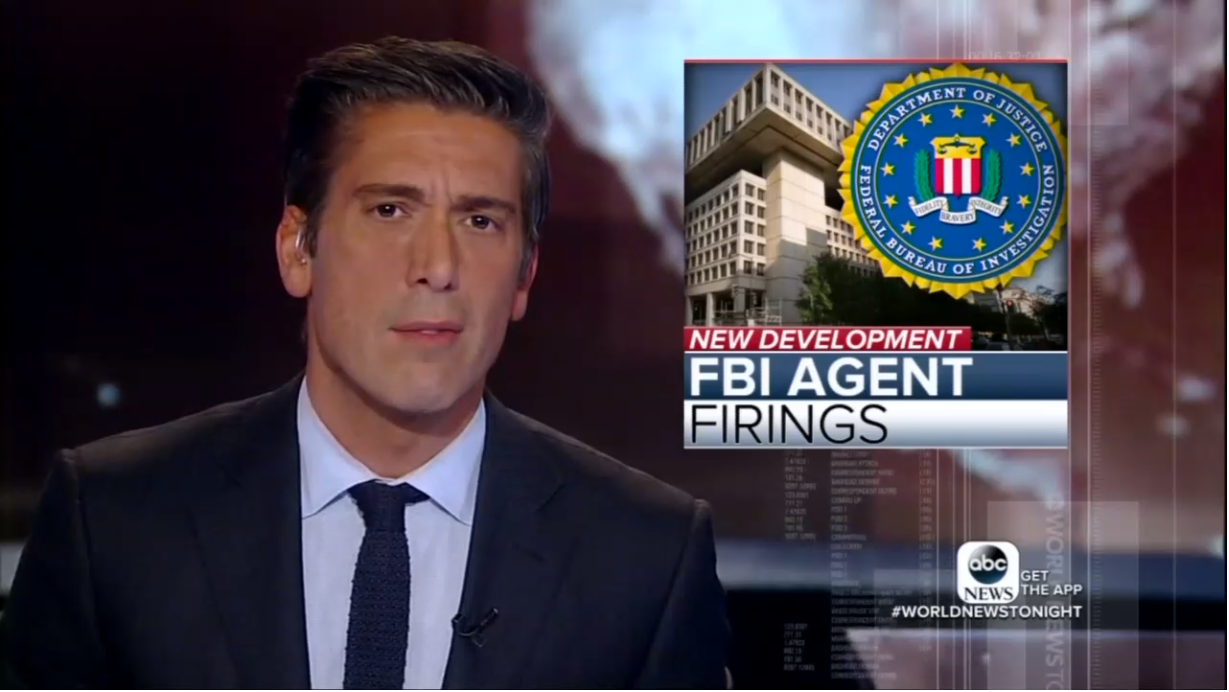 Over the weekend, it was discovered that Special Counsel Robert Mueller kicked a veteran FBI agent, named Peter Strzok, off his team for sending text messages that were disparaging of President Trump. But on Monday, new information broke about just who the agent actually was. Apparently, he was responsible for toning down former FBI Director Comey’s language when he was announced he would not recommend charges be brought against Hillary Clinton in her e-mail investigation. That interesting tidbit was blacked out of the reports in the evening broadcasts of CBS and NBC.

During their morning broadcasts, both CBS This Morning and NBC’s Today mentioned Strzok’s removal from the investigation team. But come Monday evening, NBC Nightly News failed to mention the new development when reporting on the agent’s removal, while CBS Evening News didn’t mention the Special Counsel at all.

ABC’s World News Tonight was the only one in the big three to report the new details of Strzok’s past. “ABC News has also now confirmed from a Source that Strzok played a key role in how then FBI Director James Comey announced the results of the Hillary Clinton e-mail investigation,” reported anchor David Muir after recalling what broke over the weekend.

Surprisingly, Muir actually went on to explain what Strzok did to lessen the political/legal blow to Clinton: “Recommending that Comey describe Clinton's actions as, quote, “extremely careless,” rather than, quote, ‘grossly negligent.’ Now, the significance is that it’s a felony to mishandle classified information, quote, ‘in a grossly negligent way.’”

Later in the night, after the networks were off the air, The Daily Caller uncovered even more damning information about Strzok. “The FBI agent who was fired from Special Counsel Robert Mueller’s Russia investigation team for sending anti-Donald Trump text messages conducted the interviews with two Hillary Clinton aides accused of giving false statements about what they knew of the former secretary of state’s private email server,” reported Chuck Ross.

As Ross wrote, the differences in the results of Strzok’s Trump investigation versus his Clinton one were shocking. “The starkly different outcomes from Strzok’s interviews — a felony charge against Flynn and a free pass to Mills and Abedin — are sure to raise questions from Republicans about double-standards in the FBI’s two most prominent political investigations,” he explained.

Since neither CBS nor NBC wanted to report Strzok’s positive involvement the Clinton e-mail investigation, it will be interesting to see if they decide to report on The Daily Caller’s findings.

ABC being the one to actually mention Strzok's connection to the Clinton e-mail investigation was indeed surprising. But it might have something to do with the fact that ABC News President James Goldston ripped into his staff Monday morning for their abysmal reporting on former National Security Adviser Michael Flynn’s plea deal.

DAVID MUIR: And one more development tonight involving the Special Counsel, Robert Mueller's team tonight. A veteran FBI agent who was removed from the Russia investigation. We learned that Robert Mueller removed Peter Strzok back in August after learning that Strzok had sent potentially anti-Trump text messages. ABC News has also now confirmed from a Source that Strzok played a key role in how then FBI Director James Comey announced the results of the Hillary Clinton e-mail investigation. Recommending that Comey describe Clinton's actions as, quote, “extremely careless,” rather than, quote, “grossly negligent.” Now, the significance is that it’s a felony to mishandle classified information, quote, “in a grossly negligent way.”