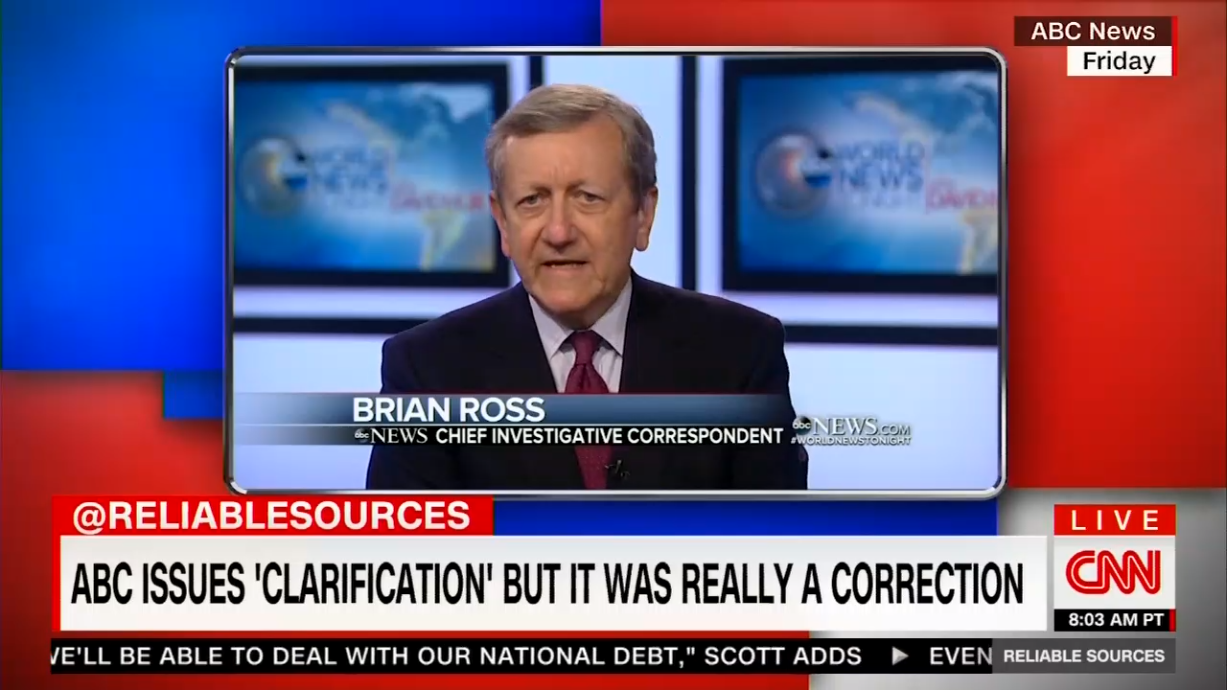 In a CNN scoop out Monday, Oliver Darcy and Brian Stelter reported that ABC News President James Goldston angrily tore into his staff on Monday during an editorial conference call, “and announced that [Brian] Ross, the network's chief investigative reporter, will no longer cover stories related to President Trump.” The move comes after Ross was suspended for falsely claiming former National Security Adviser Michael Flynn was prepared to testify that, as a candidate, Donald Trump directed him to contact the Russians.

According to CNN, Goldston could be heard on an audio recording of the call fuming: “I don't think ever in my career have I felt more rage and disappointment and frustration that I felt through this weekend and through the last half of Friday."

“If it isn't obvious to everyone in this news division, we have taken a huge hit and we have made the job of every single person in this news division harder as a result,” Goldston vented at his staff. “It's much, much harder. We have people in Washington who are going to bear the brunt of this today and in the days forward. Very, very, very, very unfortunate. Really, really angry about it.”

Goldston was also upset that Ross managed to somehow get his false report on the air with no prior approval. “We just went on air with that information. We hadn't approved doing that. And the thing that just kills me about this is all we had to do was wait. We had to wait a few minutes.” He noted that all they had to do was wait a few minutes for the charges against Flynn to be made public and they would have seen that Ross’s information was “just plain wrong.”

He also apparently ripped his staff over how abysmal their response was. “The thing that compounded our mistake is that not only did we make a mistake, if we had then corrected ourselves right away, again -- we wouldn't be in this position,” he exclaimed. “And then it took us seven hours, eight hours to get our story straight. This is not acceptable. It's not acceptable. And we will all pay the price for a long time.”

CNN also spoke with numerous anonymous sources inside ABC News who painted the picture that everyone was treating Ross like he had the plague:

"No one wants to work with him," said one ABC News employee.

"The future doesn't seem bright for him," added another.

ABC News employees have also told CNN that there is great internal embarrassment over the blunder.

"It's a major embarrassment," one ABC News employee said.

"It makes me cringe," echoed another. "This is not what any networks needs when people are so quick to say 'fake news' to you. It makes me sick to my stomach."

In an appearance during Sunday’s Reliable Sources on CNN, Darcy told Stelter he spoke with ABC employees who were uncertain if Ross would continue to work for ABC News past his four-week suspension. With how angry Goldston appeared to be, it’s possible that the rumors could prove to be true.

If Ross was ultimately fired, it would be long overdue. In July of 2012, Ross falsely claimed the shooter responsible for the Aurora, Colorado massacre was a member of the Tea Party. And long before that, in 2001, Ross falsely linked Saddam Hussein to the anthrax attacks.