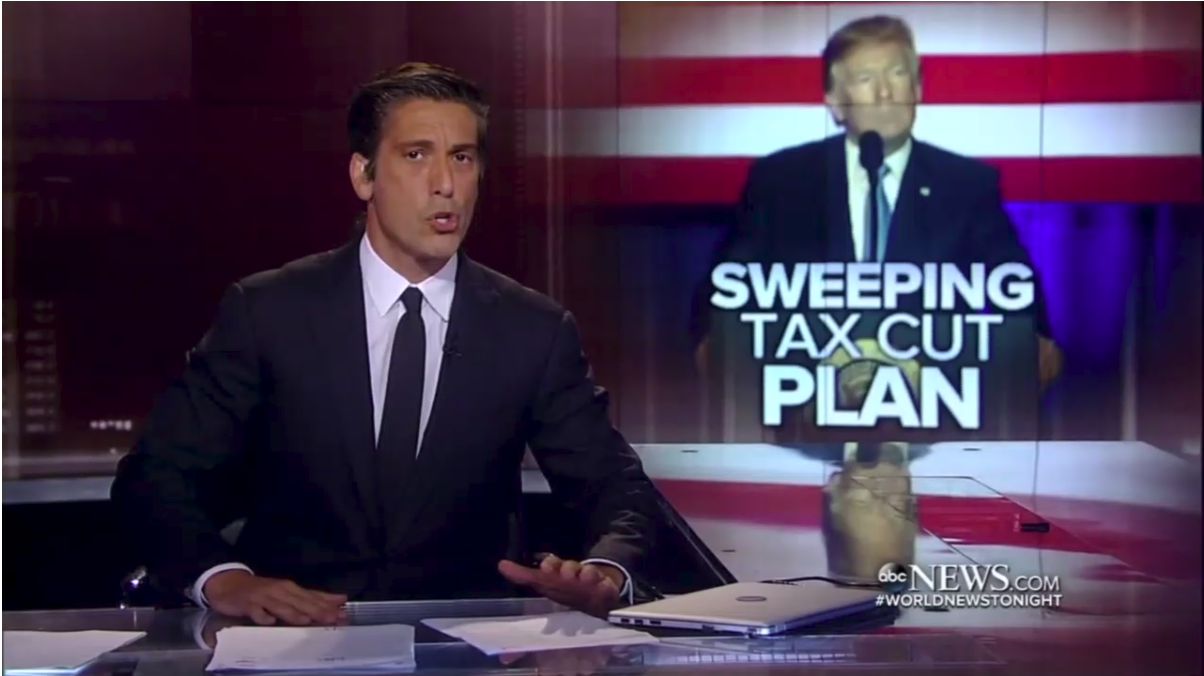 President Trump was in Indiana on Wednesday to unveil the administration’s framework for their ambitious tax reform proposal. The aim of the reform was to grant individuals, families, and businesses the tax relief they so desperately needed. But during their evening newscasts, ABC and NBC failed to mention key details as they pretended not to know how it would help the middle class or affect the President himself.

“And today President Trump hit the road to talk about the sweeping plan that slashes taxes for corporations, but he was short on specifics about how middle-class families would benefit,” asserted Anchor Lester Holt as he led into the segment during NBC Nightly News.

With Holt’s skepticism of the benefits to the middle-class, NBC Correspondent Peter Alexander brushed over the simplified tax brackets and only focused on the child tax credit expansion. Although, he did speak with a mother who was looking forward to it.

What Alexander failed to mention was that the plan also called for the standard deduction to be doubled across the board. That provision means the first $12,000 for individuals would be tax-free, while for families it would be their first $24,000. Clearly, that would be a huge benefit for lower and middle-income people, but NBC chose to play dumb.

On ABC’s World News Tonight, Chief White House Correspondent Jon Karl did mention the standard deductible being doubled by the plan, but his misleading came on how it would affect the President himself.

“The President insists his plan will benefit the working class and not the wealthy … Of course, it's impossible to know how any plan will affect the President because he still has not released his tax returns,” Karl bemoaned.

Karl’s argument was inaccurate because of what we DO KNOW of the President’s tax returns. The plan would eliminate the alternative minimum tax, which was a tax we know Trump paid in 2005 because of a leaked tax return that made its way to MSNBC’s Rachel Maddow. It’s also a tax that both the left and the right have wanted to eliminate because the middle-class increasingly found itself ensnarled by it.

The ABC Correspondent also complained about the elimination of the estate tax claiming it was “one big provision that would clearly benefit the wealthy.” “Something that is only paid on estates valued at more than $5.5 million for individuals, $11 million for couples,” he added.

But he neglected to mention that the estate tax was the leading cause of family farms being lost. The value of the land and equipment can be quite high, which triggers the tax. But because it’s an illiquid asset, there is no way to pay the tax off, thus they need to sell the land and equipment or let the government take it.

In contrast, CBS Evening News had a slightly more balanced approach to talking about what the tax reform proposal called for. According to Correspondent Nancy Cordes:

But, Republicans argue that doubling the standard deduction and boosting the child tax credit will lower working class taxes. Their plan preserves breaks for mortgage interest and charitable giving, but eliminates most other itemized deductions, along with the estate tax and the alternative minimum tax.

Both ABC and NBC clearly sought to sow opposition to the White House’s tax reform framework by omitting key details, brushing over benefits, and misleading on the facts. They also mysteriously because fiscally responsible and were worried about how Trump planned to "pay" for the tax cuts. They failed to mention his proposed budget cuts.

LESTER HOLT: Tonight the White House and Congressional Republicans are turning their attention to taxes. And today President Trump hit the road to talk about the sweeping plan that slashes taxes for corporations, but he was short on specifics about how middle-class families would benefit. NBC's Peter Alexander breaks down what we know. 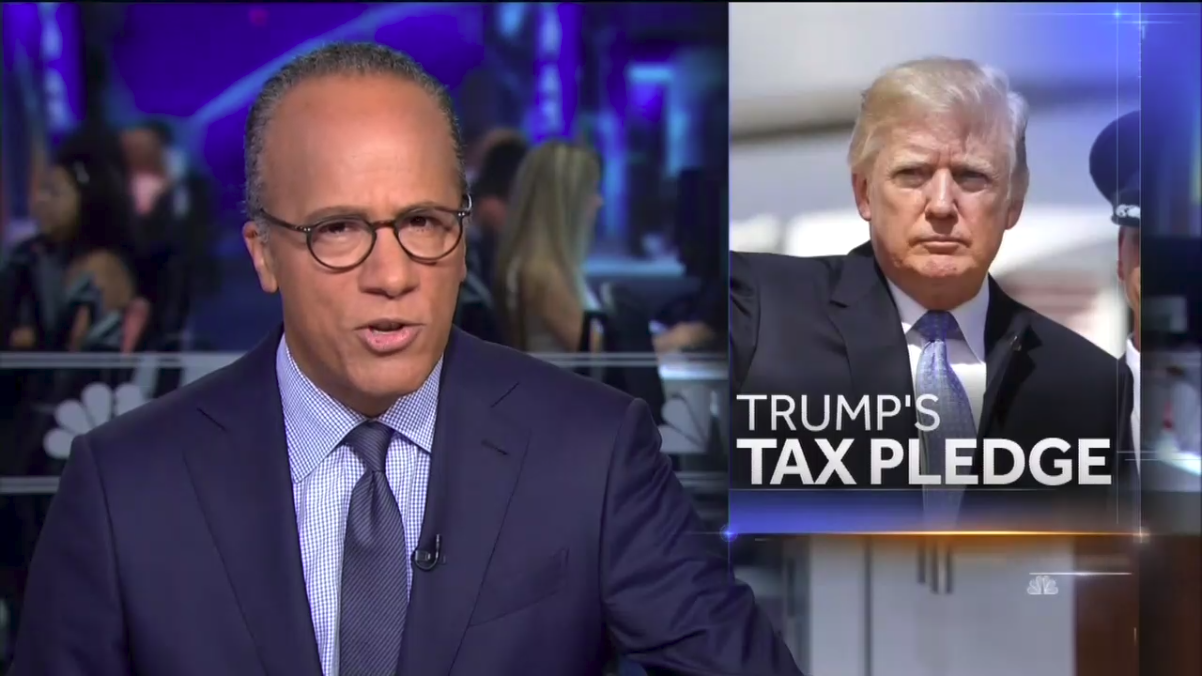 MRS. BOREES: It's important to us to get those tax breaks, and we count on them as part of our income.

ALEXANDER: Still, the long-awaited rollout is lacking key details, leaving many questions unanswered. Experts warn it could cost the country more than $2 trillion over a decade.

MAYA MACGUINEAS: Without all the details we're still figuring it out, but the winners are today's taxpayers because we're going to have a big tax cut where the bill is added to the debt, and the losers are our kids who are going to have to pay for that.

DONALD TRUMP: I'm doing the right thing, and it's not good for me, believe me.

ALEXANDER: Democrats not buying it.

CHUCK SCHUMER: He ain't walking the walk. This is aimed at the wealthiest people in America. They do far and away the best.

ALEXANDER: This tax fight critical to a President, who eight months in, still battling, needs a legislative win. Today, promising he'll revisit healthcare next year after reaching across the aisle.

DAVID MUIR: Good evening. And it's great to have you with us here on a Wednesday night. And we begin with the President's sweeping new tax plan, and what it could mean for middle-class Americans, corporate America, and the wealthiest Americans, too. Late today in Indianapolis, the President promising a revolutionary change for middle-class families. But still unanswered tonight, how will he pay for it? And even some Republicans this evening saying this will be even more challenging than their efforts to kill Obamacare. ABC's Chief White House Correspondent Jonathan Karl, leading us off.

JON KARL: Details are still sketchy, but the plan calls for slashing the tax on corporations, now 35 percent, to 20 percent. For individuals and families, reducing the number of tax brackets from seven to just three. Doubling the standard deduction for families. That would mean no income tax whatsoever on the first $24,000 of income. The President insists his plan will benefit the working class and not the wealthy.

DONALD TRUMP: They can call me all they want. It's not going to help. I'm doing the right thing, and it's not good for me. Believe me.

KARL: Of course, it's impossible to know how any plan will affect the President because he still has not released his tax returns. But there's one big provision that would clearly benefit the wealthy. He wants to eliminate the estate tax. Something that is only paid on estates valued at more than $5.5 million for individuals, $11 million for couples. While Congress will surely make changes in the plan, the President insists there's one thing he won't budge on -- that huge tax cut for corporations.

TRUMP: 20 is my number. So, I'm not negotiating that number. 20 is a perfect number.

KARL: The president doesn't explain how to pay for these hefty tax cuts, leaving Congress, already deeply divided, to figure that out.