Chuck Todd Doubles Down on Giving Antifa Violence a Platform 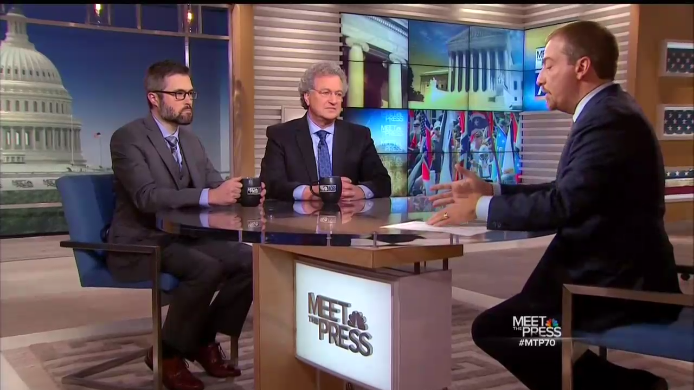 On Thursday, NBC’s Chuck Todd drew criticism when he decided to give Antifa -- a radical leftists group recently designated by New Jersey as a domestic terrorist organization -- a platform on his MSNBC show MTP Daily. But come Sunday’s Meet the Press, Todd doubled down and decided to have a so-called “debate” about whether their use of violence to shut down free speech was justifiable. Antifa supporter and Dartmouth Professor Mark Bray again appeared with Todd to spread his twisted ideas.

When describing what Antifa was, Todd downplayed the group’s radicalness by simply saying they were “a far-left political movement that argues it's necessary to confront hate groups sometimes with force.” No mention at all of their assaults on police, and innocent Trump supporters during the 2016 election, their attacks on reporters in Charlottesville, nor their “Welcome to Hell” chaos at the recent G20 summit in Germany.

“You seem to be a very small minority here who is defending the idea of violence, considering that somebody died in Charlottesville. Why do you defend confronting in a violent way,” Todd began the “debate” by asking Bray.

The leftist radical argued that the movement was not that small of a minority and claimed that their indiscriminate violence was somehow them exercising their right to “self-defense.” “I think that a lot of people recognize that when pushed, self-defense is a legitimate response to white supremacist and neo-Nazi violence,” Bray said.

There was no clarification from Todd of how Antifa’s definition of “fascist” only applies to those who don’t hold liberal beliefs. Their definition blankets nearly everyone on the right and now covers those on the left who question their tactics of shutting down free speech.

With the sense of “how can you argue against this,” Todd turn to Richard Cohen President of the Southern Poverty Law Center and asked: “Richard, why do you believe this is a mistake?”

Cohen came down in support of the First Amendment. “I think it's a spectacularly bad idea to give one group of people the right to silence another group of people,” he explained to Todd. “It's contrary to our values embodied in the first amendment.” He also warned that if white nationalists were driven underground, it ran the risk of further radicalizing them to the point where they could start launching attacks.

Todd did question Bray about the ineffectiveness of violence during the Civil Rights movement. “Well, there's a big difference between confronting fascism and confronting other forms of violence,” Bray claimed. “We can see that during the '30s and '40s there was no public opinion to be leveraged by nonviolent resistance.” But Todd failed to mention that counter-protests were ineffective against the rise of the Nazis in the 30s because they were using the same violent tactics Antifa was using in the present-day to intimidate and shut up opponents.

Bray then tried to say Cohen was abusing his “privilege” and claimed he was arguing that people shouldn’t defend themselves period. “You know, it's not an issue of defending yourself. It's an issue of trying to silence other people. No one is saying that, you know, if you're slugged in the face that you have to sit there and take it,” Cohen shot back. “It's a very peculiar notion of self-defense to say you can censor people.”

For the rest of the “debate,” Todd let Bray spread his unfounded propaganda with no true push back or confrontation on the lies. There were no questions from Todd about Antifa’s argent support for communism, an ideology that was responsible for killing over 100 million people and counting. And no mention of Antifa throwing bottles of urine at police in Boston, their assault on an elderly man, or the dragging of an older Trump supporter across the ground.

By not pushing back on this kind of radical violence and treating it like it has a place at the table in our political discourse, Todd is giving them permission to continue.

CHUCK TODD: Welcome back. I'm joined now by two gentlemen with very different views on how to respond to white supremacists when they take to the streets. Mark Bray is a Dartmouth professor who has studied the Antifa, anti-fascist movement. Antifa is a far-left political movement that argues it's necessary to confront hate groups sometimes with force. Professor Bray is the author of Antifa: the Anti-Fascist Handbook. And Richard Cohen is president of the Southern Poverty Law Center, is an expert in hate groups and he said direct confrontation simply leads to the more kind of violence we saw in Charlottesville.

Gentlemen, welcome to you both. I'm going to try to have this sort of debate-y, so Mark Bray, I'll start with you. You seem to be a very small minority here who is defending the idea of violence, considering that somebody died in Charlottesville. Why do you defend confronting in a violent way? 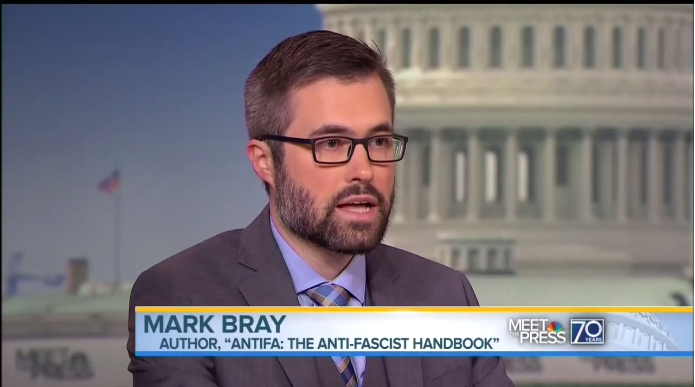 MARK BRAY: Well, first I would contest the notion that I’m that small of a minority. I think that a lot of people recognize that when pushed, self-defense is a legitimate response to white supremacist and neo-Nazi violence. We've tried ignoring neo-Nazis in the past and seen how that turned out in the '20s and '30s. And the lesson of history is you need to take it with the utmost seriousness before it's too late. We've seen the millions of deaths that have come from not taking it seriously enough and we can see that really the way that white supremacy grows, the way that neo-Nazism grows is by becoming legitimate, becoming established, becoming everyday, family friendly, wear khakis instead of hoods. The way to stop that is what people did in Boston, what people did in Charlottesville. Pull the emergency brake and say you can't make this normal.

TODD: Richard, why do you believe this is a mistake?

RICHARD COHEN: I think it's a spectacularly bad idea to give one group of people the right to silence another group of people. It's contrary to our values embodied in the first amendment. It's likely to drive the people who are trying to censor underground where they may resort to illegal means to express themselves like bombs. And lastly, it's likely to lead to a terrible spiral. We saw that in Berkeley, the Antifa came and shut down a speech. The next time the white nationalists brought their own private army. And so where does something like that stop? Yesterday in Boston, you know, when we saw thousands and thousands of people peacefully protest, that seemed like a much stronger answer to white supremacy than clubs and guns.

TODD: Andy Young made the point, Mark, earlier in the show that essentially there were those in the Civil Rights movement that wanted to confront violently and he made the not-so-subtle reminder, they're not here anymore.

BRAY: Well, there's a big difference between confronting fascism and confronting other forms of violence. We can see that during the '30s and '40s there was no public opinion to be leveraged by nonviolent resistance. If you get fascists to be powerful enough in government, they're simply not going to listen to the kind of public opinion that nonviolence can generate. That's the argument for resistance to Nazis. The other point that I'll make is a lot of people don't have the choice whether they can defend themselves or not. We’ve seen that even before this sort of, what you called it spiral of violence, started there were attacks on mosques, there were attacks on synagogues. A lot of people are under attack and sometimes they need to be able to defend themselves. It's a privileged position to be able to say that you never have to defend yourself from these kinds of monsters. 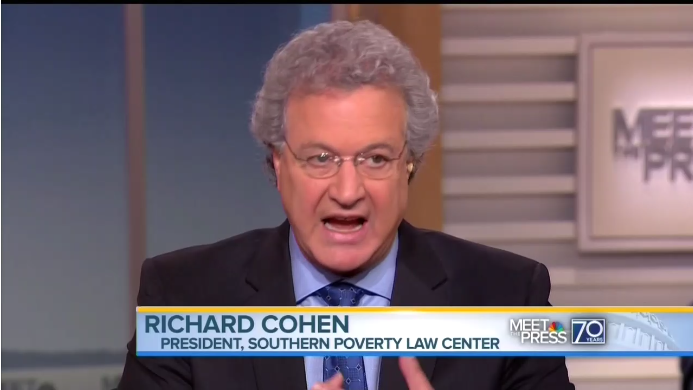 COHEN: You know, it's not an issue of defending yourself. It's an issue of trying to silence other people. No one is saying that, you know, if you're slugged in the face that you have to sit there and take it. The question here is when white nationalists want to walk down the street, should people stop them. And that's a very different issue. It's a very peculiar notion of self-defense to say you can censor people.

TODD: Some of the criticism of the Antifa movement, Mark, is that you're actually against speech. That you want to shut down this speech and that borders on censorship.

BRAY: Well, let's be clear that Antifa are not calling on the government to censor anyone. In fact, they resist the notion of turning to the government or turning to the police, who we've seen have been infiltrated by white supremacists who have been sympathetic to the, sort of, return to law and order notion of fascism. And so the idea is the real enemies of free speech are fascists. We've seen that historically. We’ve seen that they're the ones that if they have their way will shut down speech. It also differs in the sense that anti-fascists see this as a political struggle. They don't see fascism as a difference of opinion or as kind of a different perspective to consider. Instead they see fascists as the enemy. I think that we need to come around to that notion, considering there is no doubt what they have done historically.

TODD: Richard, I know the concern is that it makes martyrs out of the white supremacists.

TODD: And one could argue that the Antifa movement helped the President make his arguments of, quote, “both sides.”

COHEN: Sure, sure, sure.

TODD: Do you buy that?

COHEN: Well, look, to some degree there was a lot of ugliness that the Antifa brought there. I think they play into the hands of the white nationalists who say, “Look, we are the ones who are embattled.” The answer to bad speech is more speech. We saw it in Boston yesterday.

BRAY: We've seen that fail historically. Fascism cannot be defeated through speech. And we can also see Charlottesville did give attention to white supremacy but it's not like your average American can name any of the groups that were out there. Instead, they were unable to do the things that we see make movements grow, embed themselves in communities, establish networks, express their message. Instead, we see, and I can tell you from my book, from my research, there's a lot of empirical examples of anti-fascism working and stopping these groups from growing.

TODD: All right, Mark Bray, Richard Cohen. I've got to leave it there. I imagine though the debate doesn't stop here. Thank you both for coming on, I appreciate it.