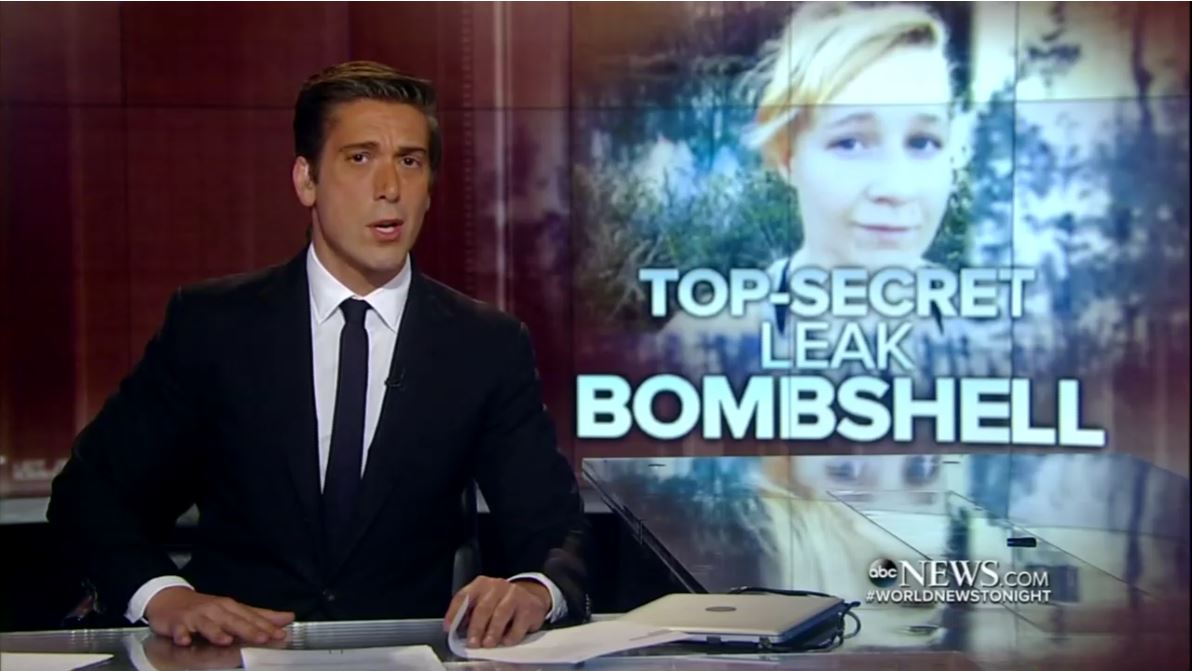 Not long after top-secret documents from the National Security Agency made their way onto the internet news site The Intercept on Monday, the Justice Department arrested NSA contractor Reality Winner. The 25-year-old Air Force veteran worked on a military base in Georgia, but online she had a long history of being heavily anti-Trump, an apparent social justice warrior, and a supporter of Iran over the U.S. During their evening broadcasts, the Big Three Networks (ABC, CBS, and NBC) either played down her political attitudes, or outright ignored them as they reported on what she did.

During his report on NBC Nightly News, Justice Correspondent Pete Williams passed along her family’s claim that “she wasn't highly political,” and Anchor Lester Holt claimed her “motive is a mystery.” But in reality, Winner was anything but silent about her political views.

In a tweet she wrote earlier this year, she smeared Trump saying: “the most dangerous entry to this country was the orange fascist we let into the white house [sic].” She had tweeted profanities targeting Trump, such as #FuckingWall, #TrumpIsACunt, and she tweeted the anti-Trump rallying cry of #notmypresident. Winner was also a supporter of the Black Lives Matter movement and had said on Twitter that “being white is terrorism.”

And in a response to Iranian Foreign Minister Javad Zarif, who said “We will never use our weapons against anyone, except in self-defense,” Winner proclaimed her support for Iran, writing: “There are many Americans protesting US govt aggression towards Iran. If our Tangerine in Chief declares war, we stand with you!”

The closest Williams came to reporting Winner’s left-wing ideology was mention how “on Twitter, she's no fan of Donald Trump, once calling him an ‘orange fascist.’” But he played a clip of her mother, Billie Winner-Davis defending her daughter. “She is a good person. She volunteers, she does whatever she can to make the community and the world better,” she told the press.

On CBS Evening News, Chief White House Correspondent Major Garrett merely brushed over her anti-Trump hatred. “Winner, whose social media postings sharply criticized President Trump, faces up to 10 years in prison,” he said. Garrett followed that up with a clip of her step-father, saying: “She's dedicated, you know, to trying to make the world a better place.” CBS framed the story as Trump cracking down on government leaks. "Well, President Trump promised to crackdown and now a government contractor has been charged with leaking about Russian interference with the U.S. election," bemoaned Anchor Scott Pelley with the headline "Leak Crackdown" behind him.

ABC’s World News Tonight ignored Winner’s political leanings all together, but on four different times, they mentioned that she was a veteran. “Reality Leigh Winner, an NSA linguist trained in Farsi and Pashto, who received an Air Force commendation medal, described by family as a patriot,” reported Justice Correspondent Pierre Thomas.

Winner’s social media accounts were crawling with her radical political posts, but Thomas couldn’t be bothered to report on it. Instead, he was more interested in her workout and yoga videos on Facebook. “A young woman into fitness, seen here on Facebook discussing yoga instruction and competing in weightlifting,” he noted.

And for the Spanish-language networks, Univision also failed to report Winner’s radical left-wing ideology. Meanwhile, on Telemundo, they thought it wise to not report on Winner nor the NSA leaks altogether.

Winner’s political philosophy should have been a major part of the story because it can explain why she leaked classified secrets. But by omitting it from their reports, or playing it down, they falsely painted her as an apolitical person doing it for a just cause when she was likely doing it to hurt Trump. And that makes us all losers.

LESTER HOLT: Back home we're learning much more about the young woman charged in the first intelligence leak case under President Trump. Prosecutors say a 25-year-old NSA contractor has admitted leaking a top-secret document about Russia's election meddling to an online magazine. But as NBC News Justice Correspondent Pete Williams explains, the motive is a mystery.

PETE WILLIAMS: Barely one hour after an online news site, The Intercept posted a story about a top-secret U.S. government document on Russian hacking, the Justice Department said a 25-year-old Georgia woman, Reality Leigh Winner had arrested for leaking it. Her parents said they're shocked.

BILLIE WINNER-DAVIS: I'm worried about her.

WINNER-DAVIS: She is a good person. She volunteers, she does whatever she can to make the community and the world better.

WILLIAMS: Reality Winner spent six years in the air force, an intelligence analyst and language expert, giving her top-secret security clearance. Since February, she's been working for a National Security Agency contractor at this Georgia military base.

On Twitter, she's no fan of Donald Trump, once calling him an “orange fascist.” Officials say the NSA realized the document had been leaked when an Intercept reporter called last week and said the news site had it. 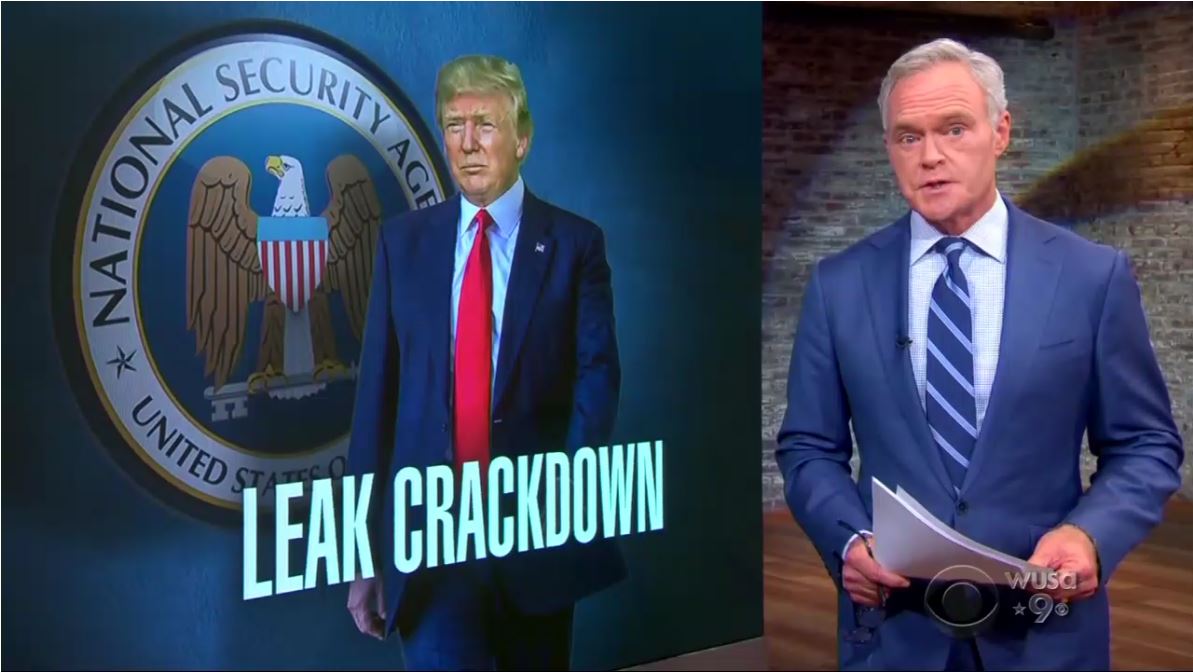 SCOTT PELLEY: Well, President Trump promised to crack down and now a government contractor has been charged with leaking secrets about Russian interference with the U.S. election. Here's our Chief White House correspondent Major Garrett.

GARY DAVIS: She's dedicated, you know, to trying to make the world a better place.

GARRETT: Leaks have long bedeviled presidents, but prosecutions were rare until the Obama administration. According to the A.C.L.U., the Obama Justice Department prosecuted eight cases of national security leaks, more than double all previous administration combined. 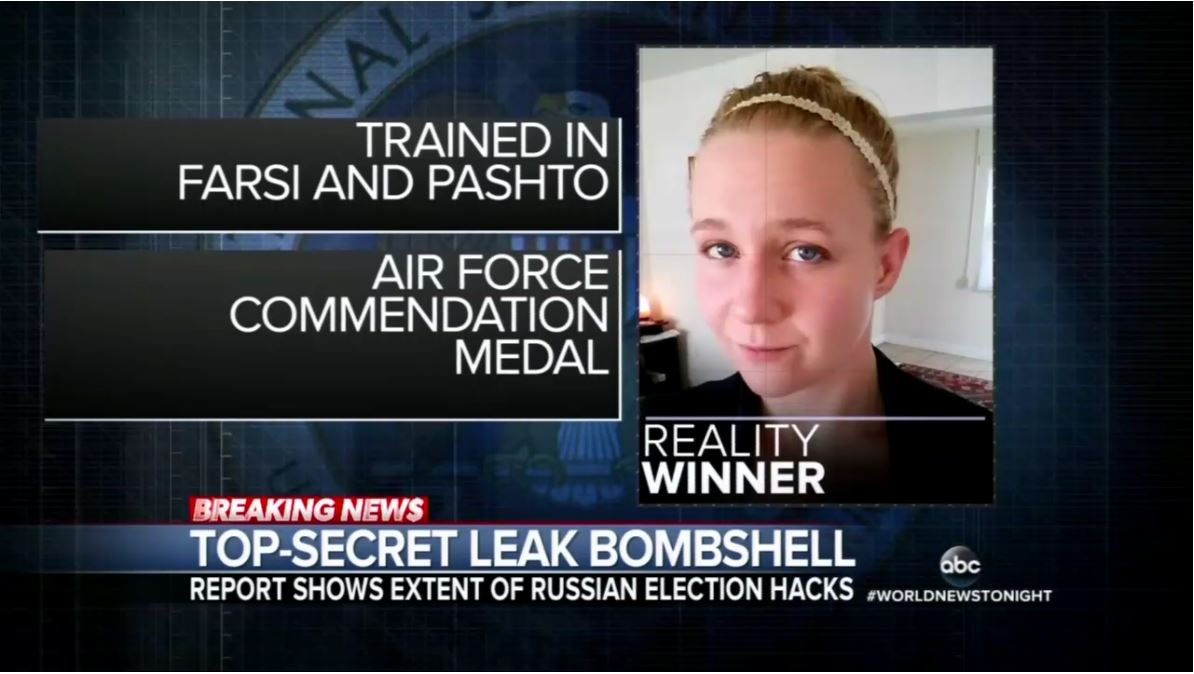 DAVID MUIR: Next to the arrest tonight of a government official after a top-secret document leaked. That arrest of a government contractor for allegedly leaking that document. The alleged, leaker an army veteran and a language specialist, tonight she's facing charges. And that document, many asking: “Could it the first significant that Russia also wanted to get to the software found in so many voting booths across this country? Here's ABC's Senior Justice Correspondent Pierre Thomas tonight.

SEAN SPICER: Any disclosure of classified or sensitive information can clearly threaten our national security.

THOMAS: Reality Leigh Winner, an NSA linguist trained in Farsi and Pashto, who received an air force commendation medal, described by family as a patriot. A young woman into fitness, seen here on Facebook discussing yoga instruction and competing in weight-lifting.

But tonight, her disclosure’s stunning. Revealing a classified NSA report about Russian meddling in the 2016 election. Efforts by Russian military intelligence to hack the software of U.S. companies involved in voting machines and voter registration, as well as cyberattacks on more than 100 local election officials. A key Senator saying the extent of the attacks is much broader than reported so far.

MARK WERNER: It's important that the American people understand that the Russian attempts to break into a number of our state voting processes was broad-based.

THOMAS: Winner faces up to ten years in prison and is the first arrest in the Trump administration's promised crackdown on leaks.