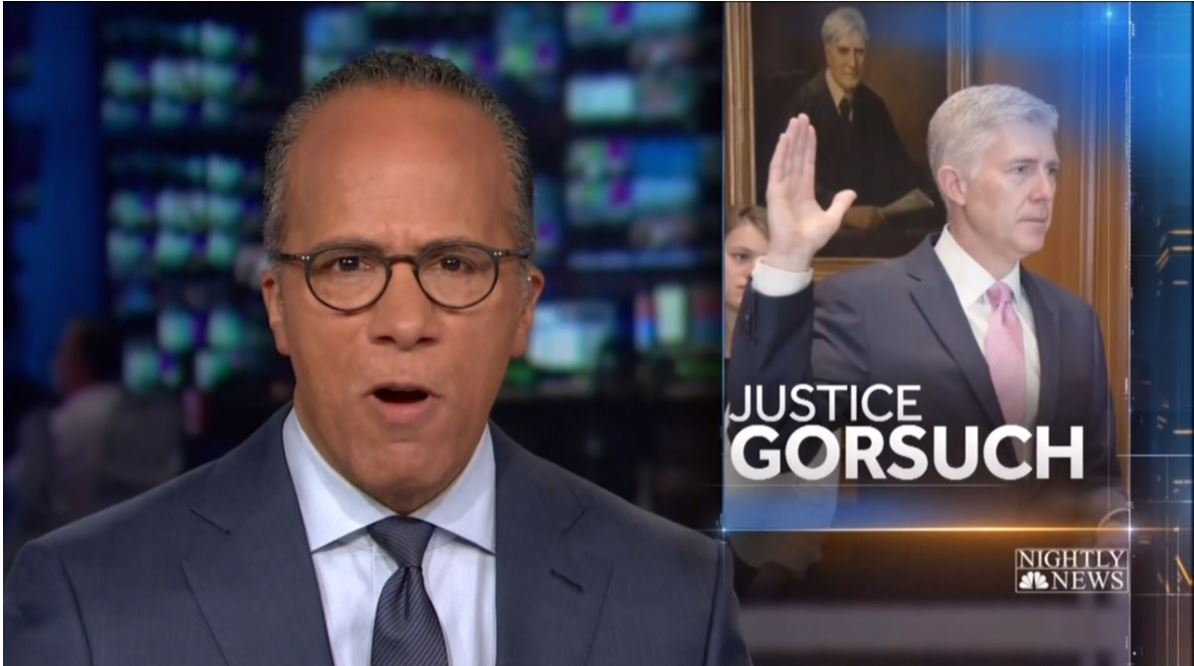 On Monday, Judge Neil Gorsuch became the 113th associate justice to sit on the Supreme Court after he was sworn in by Chief Justice John Roberts. The event was a culmination of many hours of testimony, a damaging filibuster by Senate Democrats, which forced Senate Republicans to use the so-called “nuclear option” to proceed with Gorsuch’s confirmation. But despite all of those historic obstacles, the Big Three networks (ABC, CBS, and NBC) treated it as though it was nothing special, and ignored Democratic icon Tom Daschle who scolded Democrats for filibustering.

All three of the networks gave to story the bare minimum of a simple news brief. ABC gave Gorsuch’s swearing in a mere 20 seconds of airtime, CBS and NBC gave it 23 and 25 seconds respectively. There was not a single mention of the filibuster nor the use of the “nuclear option.” It was a complete turnaround from last week’s coverage, where ABC and NBC ran full reports railing against Republicans for using the “nuclear option” to end debate and move on to a vote.

One of the more stunning comparisons is the difference between CBS’s coverage from Monday and the swearing in of liberal Elena Kagan in 2010. After Justice Kagan was sworn in, CBS dedicated roughly two minutes to her story. Reporter Whit Johnson remarked that “The confirmation marks the end of a long confirmation process. 17 hours of testimony.” Back then, CBS thought that was impressive, but in 2017 Gorsuch was subjected to 20 hours of grilling by the Senate.

Although Kagan’s nomination was controversial because of the fear that her liberal positions would sway here rulings, Gorsuch’s was arguably even more controversial due to whining Democrats who irreparably damaged the reputation of the Senate.

That fact didn’t seem to be lost on former Senate Majority Leader Tom Daschle, who recently slammed his fellow Democrats for their shenanigans. In a discussion with RealClearPolitics, Daschle lamented that “Today is just amazing — the symmetry that exists between those who believe that it’s wrong today but to believe in doing it before … What I would fear the most is a lack of respect and appreciation of the institution itself.”

According to Daschle, “Unfortunately, Democrats have far dirtier hands when it comes to the erosion of the institutional pillars of the Senate than Republicans going all the way back.” He also noted that when it came to eroding the pillars of the Senate, Democrats are responsible for far more damage than just the Supreme Court confirmation process:

The whole budget process was a Democratic product, and that was in my view a procedural disaster. Then we lowered the threshold from 67 to 60. That was a Democratic effort. And then in 2013, we took it away completely for nominations, and that was Democratic. So, Democrats who may lament this institutional deterioration, I think there’s a lot of history here that can’t be explained away.

Failing to report in the historic but damaging nature of Gorsuch’s confirmation may have been seen as the right call for the Big Three networks. If they did mention those circumstances they would almost certainly have to acknowledge Daschle’s powerful rebuke of his party. And by playing it down they can act as though the confirmation was nothing too eventful. 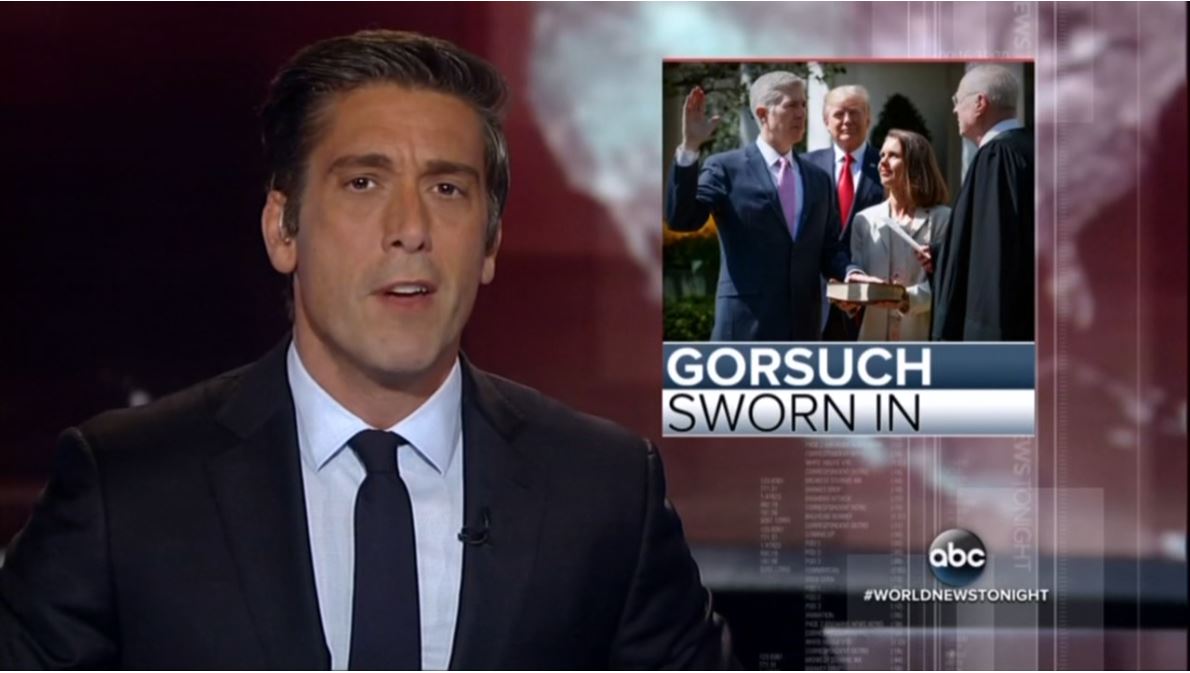 DAVID MUIR: Next to that moment of victory today for President Trump. His Supreme Court nominee now on the bench. Neil Gorsuch sworn in as the 113th Supreme Court justice during a Rose Garden ceremony today. Gorsuch replaces fellow conservative Antonin Scalia, restoring the court’s former balance. Among the cases that could come before the Supreme Court soon, President Trump's travel ban.

SCOTT PELLEY: Today 49-year-old Neil Gorsuch of Colorado was sworn in as the 113th justice of the United States Supreme Court, filling the vacancy left nearly 14 months ago when Antonin Scalia died. Gorsuch, who restores the court's conservative majority, promised to be, quote, "A faithful servant of the constitution."

LESTER HOLT: The Supreme Court once again has a full bench now that Neil Gorsuch has been sworn in to fill the seat left vacant by Justin – Justice Antonin Scalia's death nearly 14 months ago. Gorsuch first took his oath in a private ceremony administered by Chef Justice John Roberts, then in a historic first, Gorsuch was sworn in by the man he once clerked for, Justice Anthony Kennedy at a White House ceremony.