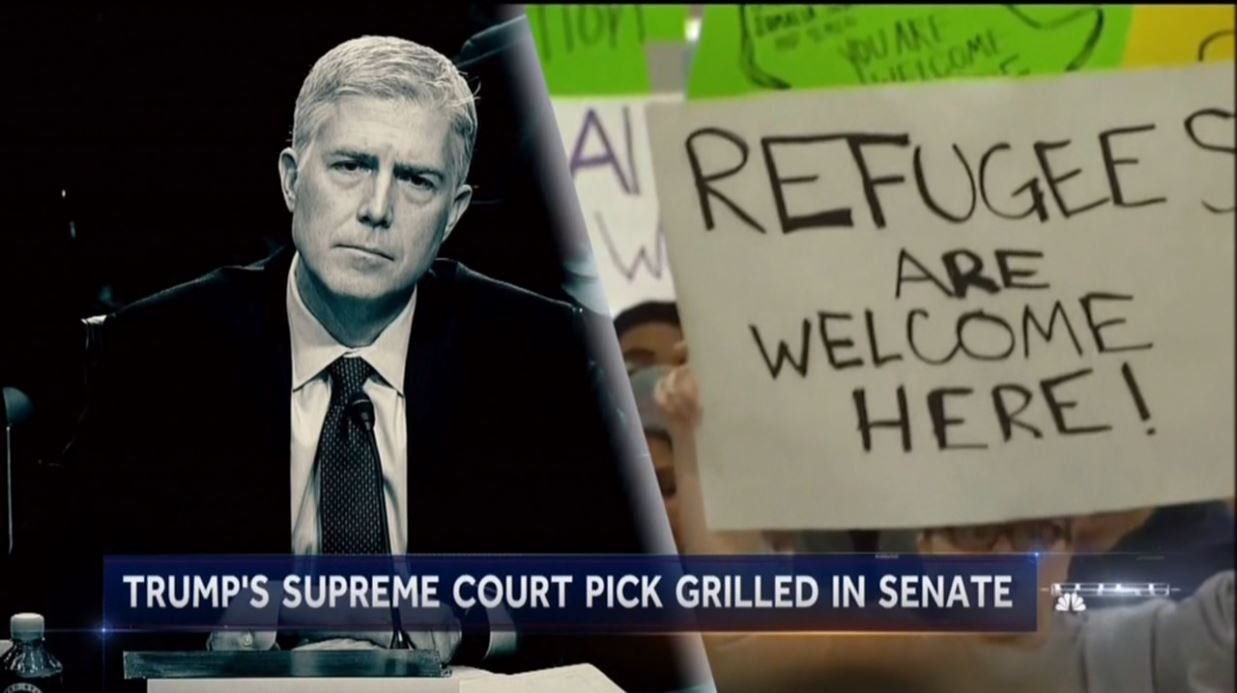 Tuesday was day two of Judge Neil Gorsuch’s confirmation hearing for Justice Antonin Scalia’s vacant seat on the Supreme Court. The roughly 10-hour hearing was largely uneventful as Senate Democrats struggled to stick him with something, anything. “Gorsuch has served on the federal bench for more than a decade, as the Senators grilled him on key issues, abortion, terrorism, and gun rights, Gorsuch didn't tip his hand,” reported Jan Crawford on CBS Evening News. So frustrated were the Big Three networks that they buried the hearing deep in their nightly reports.

NBC didn't bury the story after a commercial break like the other networks, but they did try to paint President Donald Trump’s nominee in a highly negative light, literally. “Gorsuch says he met Mr. Trump when interviewed for the job,” reported justice correspondent Pete Williams on NBC Nightly News. While he was saying that, a dreary black and white clip of Gorsuch shaking Trump’s hand played in slow motion. It looked as though it was a scene out of a TV murder documentary.

Most of Williams’ report was centered on Gorsuch’s testimony about any possible ruling he would have in a case dealing with abortion. “Judge Neil Gorsuch says he never promised President Trump, or anyone else involved in selecting him, that he would vote a certain way on the hot-button issue of abortion,” Williams warned, “Even though Donald Trump made overturning the ruling a point in his campaign.”

The grainy black and white video edit made a second appearance as Williams discussed Gorsuch’s possible ruling on Trump’s travel ban. “And Gorsuch declined to say what he would do if he’s confirmed and President Trump’s executive order on Immigration reaches the Supreme Court,” he said as a colored picture of Gorsuch morphed into depressing grays and placed next to a vivid image of anti-Trump protesters.

The hearing report by ABC’s Terry Moran was also buried behind the first commercial break on World News Tonight. Moran pounced on the Democratic line of argument that tried to paint Gorsuch as a threat to “the little guy.” “Several senators zeroed in on one case where Gorsuch sided with a company that fired a truck driver for abandoning his malfunctioning trailer in subzero weather,” Moran paraphrased the complex case where Gorsuch was the only one to side with the company.

“It makes me question your judgment,” Senator Al Franklin smeared and Moran played. The ABC reporter eventually relented and admitted that Gorsuch was doing everything right, saying: “The first rule of to being confirmed is “do no harm,” and Judge Gorsuch has been calm and knowledgeable, and even genial.”

Crawford’s report was the fairest, even though it too was played following a commercial break. “At times, the Harvard law graduate came across as more relaxed than some of the senate's more senior Democrats like Vermont's Patrick Leahy,” she stated, following it up with a clip of the nominee joking around with Senator Leahy. The most negative part was when she played a clip of Franken questioning Gorsuch’s past ambitions to get into the Bush administration.

The liberal media is desperate for something to attack Gorsuch on. Earlier in the day, MSNBC reporters lamented that Democrats were unable to get any good shots in on clean nominee. It appeared that since there was nothing bad to report, they’re just going to pretend there’s very little going on there.

LESTER HOLT: And on this very busy day there in Washington, the President's nominee for the Supreme Court, Neil Gorsuch came under intense questioning at his confirmation hearing. And thus far he's proving very tough for Democrats to rattle. Our justice correspondent Pete Williams has details on that.

PETE WILLIAMS: Judge Neil Gorsuch says he never promised President Trump, or anyone else involved in selecting him, that he would vote a certain way on the hot button issue of abortion. Even though Donald Trump made overturning the ruling a point in his campaign.

DONALD TRUMP: I'm pro-life. And I will be appointing pro-life judges.

WILLIAMS: Gorsuch says he met Mr. Trump when interviewed for the job.

LINDSEY GRAHAM: And in that interview, did he ever ask you to overrule Roe v. Wade? 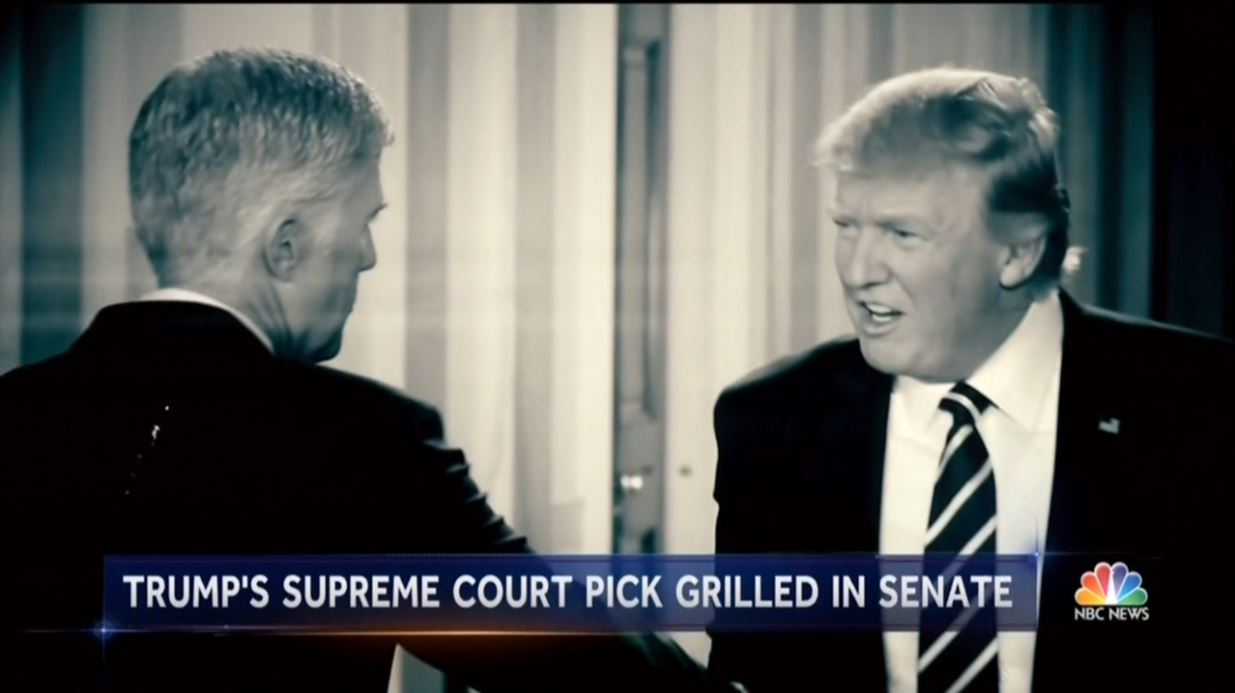 GRAHAM: What would he have done if he’d ask?

GORSUCH: I would have walked out the door.

WILLIAMS: And Gorsuch declined to say what he would do if he’s confirmed and President Trump’s executive order on Immigration reaches the Supreme Court.

PATRICK LEAHY: A Republican congressman recently said the best thing the President can do for his Muslim ban is to make sure he has Gorsuch on the Supreme Court.

GORSUCH: Senator, a lot of people say a lot of silly things. He has no idea how I'd rule.

WILLIAMS: Though their questions were pointed, even the Democrats seem to find it hard to dislike Neil Gorsuch personally who remained unruffled and confidence. Never the less, Senator Al Franken asked about a resent statement by the White House chief of staff.

RIENCE PREIBUS: Neil Gorsuch represents a conservative. Represents the type of judge that has the vision of Donald Trump.

FRANKEN: What do you think that Mr. Priebus was talking about?

GORSUCH: Respectfully Senator, Mr. Priebus doesn't speak for me, and I don't speak for him. I'm a judge. I am my own man.

WILLLIAMS: And as tonight to comment on President Trump's criticism of federal judges, Gorsuch said he finds it disheartening and demoralizing when anyone attacks the honesty and integrity of judges including the president he was asked, and he said anyone is anyone. Lester.