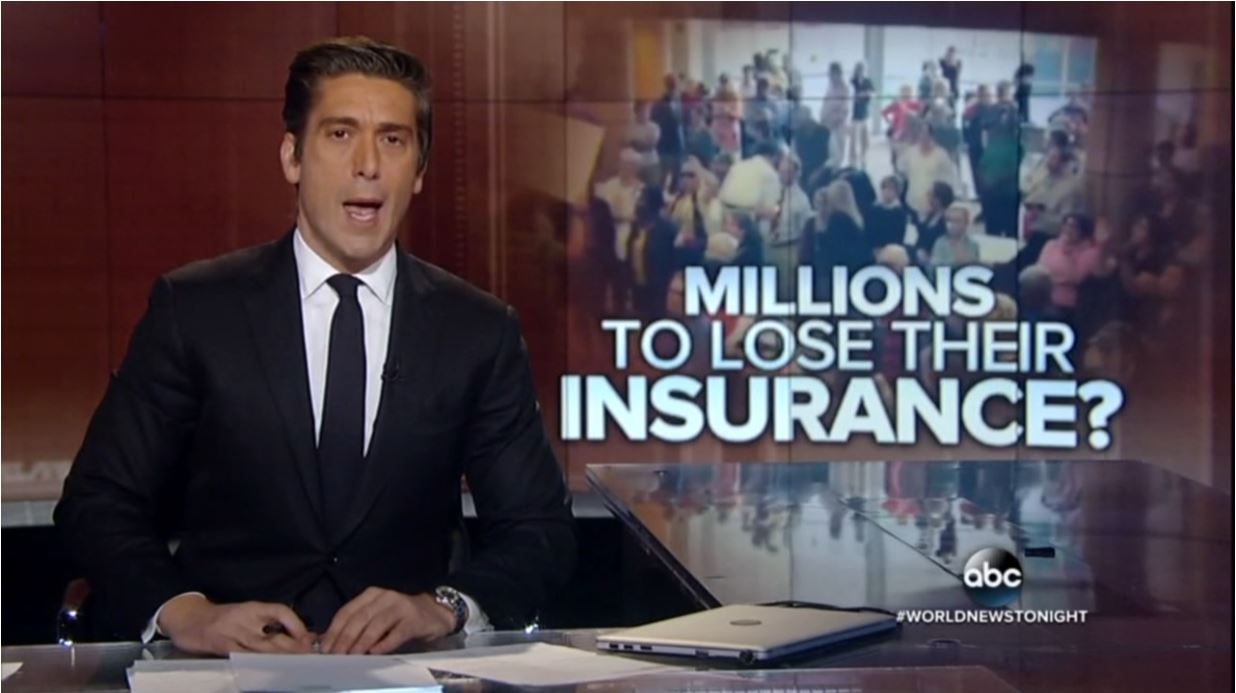 Late Monday afternoon, the Congressional Budget Office released its report on the House Republican’s proposal to repeal and replace the crumbling ObamaCare law, and it wasn’t pretty. “It finds that under the replacement plan, there would be more 14 million more uninsured people next year than under ObamaCare, and 24 million more uninsured a decade from now,” announced ABC anchor David Muir during World News Tonight. But ABC and the rest of the Big Three networks omitted key details of the bill and it’s only fair to report them.

ABC’s Mary Bruce sounded the alarm bell during her report. “Under the House Republican plan, embraced by President Trump, 14 million fewer Americans will have insurance coverage next year than under Obamacare,” she said, “Within a decade, the number of uninsured Americans will increase by 24 million.” Bruce failed to explain to viewers that the CBO determined that number by taking into account that people would choose not to buy insurance:

It’s a very important distinction because intent actually matters, they’re not just being cruelly left to fend for themselves. It’s also a fact that both CBS and NBC did mention in their respective reports, along with the claims that many would be thrown off of Medicaid. Instead, Bruce touted how Republican lawmakers were being pressured in town halls to vote it down.

Both CBS and NBC warned that there would be increases in premiums under the GOP’s proposal. “The report also predicts individual premiums would spike about 15 percent before dropping in 2020,” reported Hallie Jack on NBC Nightly News, while Nancy Cordes noted on CBS Evening News that the increase could reach upwards of 20 percent. Although, it was Cordes who mentioned that the size of the decrease was predicted to be “about 10 percent lower than they would be under ObamaCare, though not for older Americans.”

But on Monday night, none of the Big Three mentioned that premiums skyrocketed out of control under ObamaCare. Just days before the 2016 election, news broke that people who got their insurance through the health care exchanges would see an average hike of 25 percent, with states like Arizona seeing an increase of over 100. It was news both CBS and NBC ignored at the time, so it’s no surprise that they didn’t mention that the GOP’s increases were actually less that Obama’s.

That makes it rather embarrassing of NBC who interviewed an older woman who said: “After Obamacare really started to set in, my insurance premium doubled.” Jackson then said the woman would be paying more under the House Republican plan. Jackson also tried to discredit the fact that the CBO’s report on ObamaCare was drastically off by blaming the Supreme Court for upholding the states’ rights to not be forced to expand Medicaid. 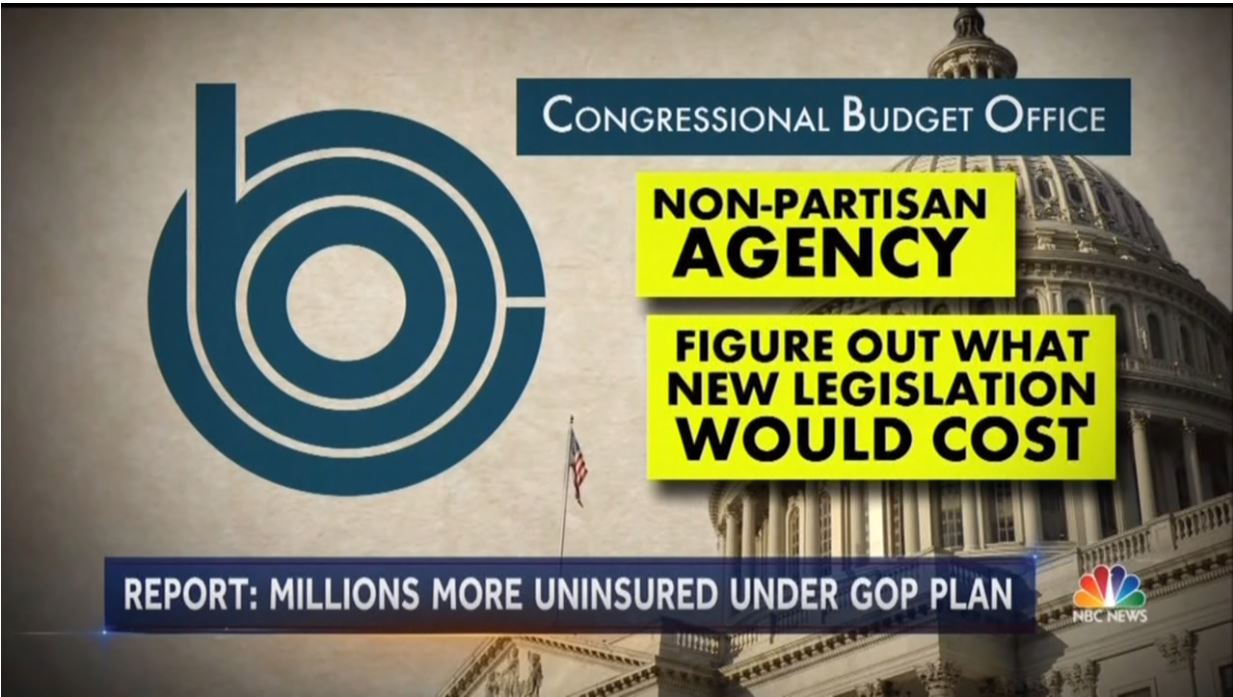 When it came to the positives of the bill, their reports were greatly lacking. All three wrote-off the hundreds of billions of dollars in deductions to the deficit.

One of the criticisms of ObamaCare is that the market was extremely unstable, which lead one health insurer executive to declare that the law was in a “death spiral.” According to the CBO report that may not be the case under the GOP proposal:

Even though the new tax credits would be structured differently from the current subsidies and would generally be less generous for those receiving subsidies under current law, the other changes would, in the agencies’ view, lower average premiums enough to attract a sufficient number of relatively healthy people to stabilize the market.

Another problem with ObamaCare is that there were not enough young healthy people enrolled to pay for the expenses of older enrollees. Again, the CBO finds that the GOP plan could possibly aid in that respect since younger enrollees would pay less. “CBO and JCT estimate that, under the legislation, a larger share of enrollees in the nongroup market would be younger people and a smaller share would be older people,” they wrote.

The GOP plan may not be the silver bullet that everyone is looking for. The CBO could be way off in this newest health care assessments as they were with ObamaCare. But it’s the duty of journalists to report on the entire report, not just the parts that come off as highly incendiary on the surface. It’s fair, accurate, and responsible to discuss the CBO report as a whole.

DAVID MUIR: We turn now to the other breaking headline at this hour. Late today, the new analysis of the Republican health care plan to replace ObamaCare. The nonpartisan Congressional Budget Office releasing new numbers tonight. And take a look. It finds that under the replacement plan, there would be more 14 million more uninsured people next year than under ObamaCare, and 24 million more uninsured a decade from now. As you can imagine reaction swift tonight on Capitol Hill. Democrats pouncing, and the White House firing back with millions of Americans insured right now under ObamaCare watching all of this very closely. ABC's Mary Bruce on the hill.

CHUCK SCHUMER: TrumpCare would be a nightmare for the American people.

BRUCE: According to the non-partisan Congressional Budget Office, under the House Republican plan, embraced by President Trump, 14 million fewer Americans will have insurance coverage next year than under Obamacare. Within a decade, the number of uninsured Americans will increase by 24 million. Emerging from the white house late today, the Secretary of Health and Human Services says he isn't buying it.

TOM PRICE: We disagree strenuously with the report that was put out. 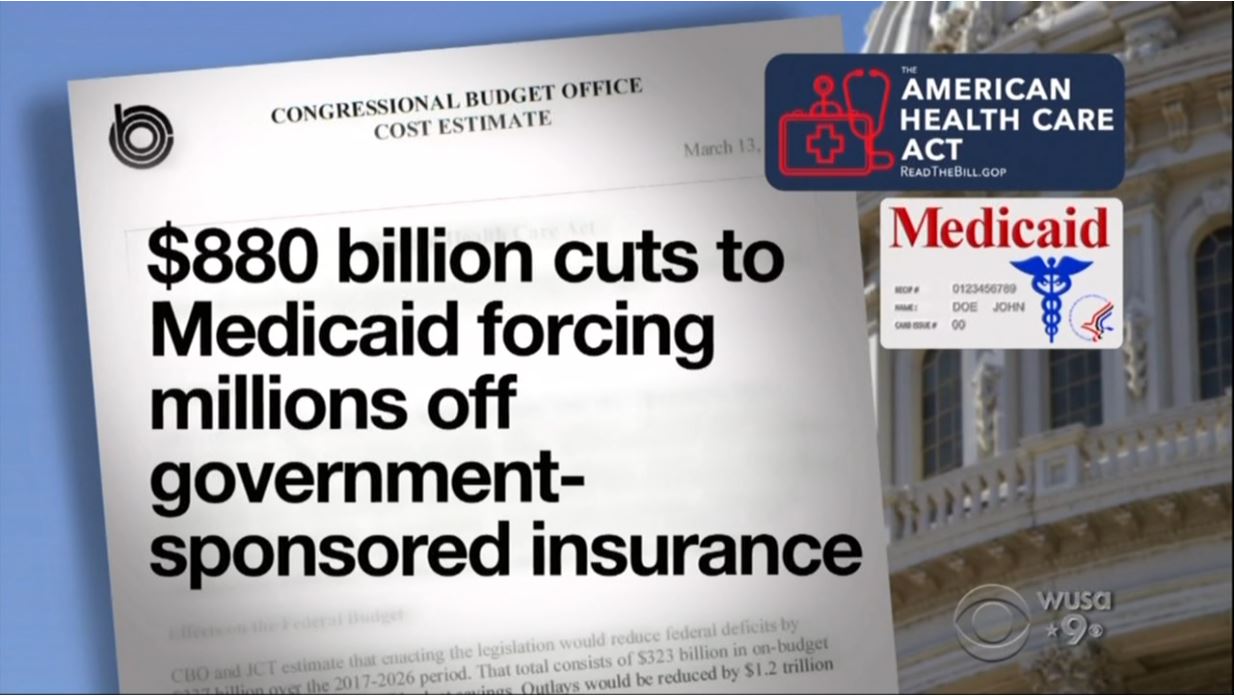 NANCY CORDES: But the non-partisan number crunchers in the Congressional Budget Office determined that 14 million people would join the ranks of the uninsured next year alone, with the number growing to 21 million in 2020 and 24 million in 2026. Democratic leaders called it unacceptable.

NANCY PELOSI: This is a remarkable figure. It speaks so eloquently to the cruelty of the bill that the Speaker called "An act of mercy."

CORDES: The CBO identified three main reasons for the drop in coverage under the GOP plan. First, some Americans would simply choose not to buy insurance because the bill repeals ObamaCare's individual mandate and associated penalties. That would drive premiums up in the short term, 15% to 20% higher than they would be under Obamacare, making insurance unaffordable for some, even as steep cuts to Medicaid, nearly $900 billion worth over ten years, would force millions off of government-sponsored insurance. Those number will make some skittish Republicans like California's Darrell Issa even more reluctant to sign on.

DARRELL ISSA: The current bill is not in a form I approve of. I am trying to change it.

CORDES: The CBO does predict that under this plan premiums by the year 2026 would be about 10% lower than they would be under ObamaCare, though not for older Americans. Anthony, conservatives will like the fact that this plan is significantly cheaper than ObamaCare, largely because of those Medicaid cuts. 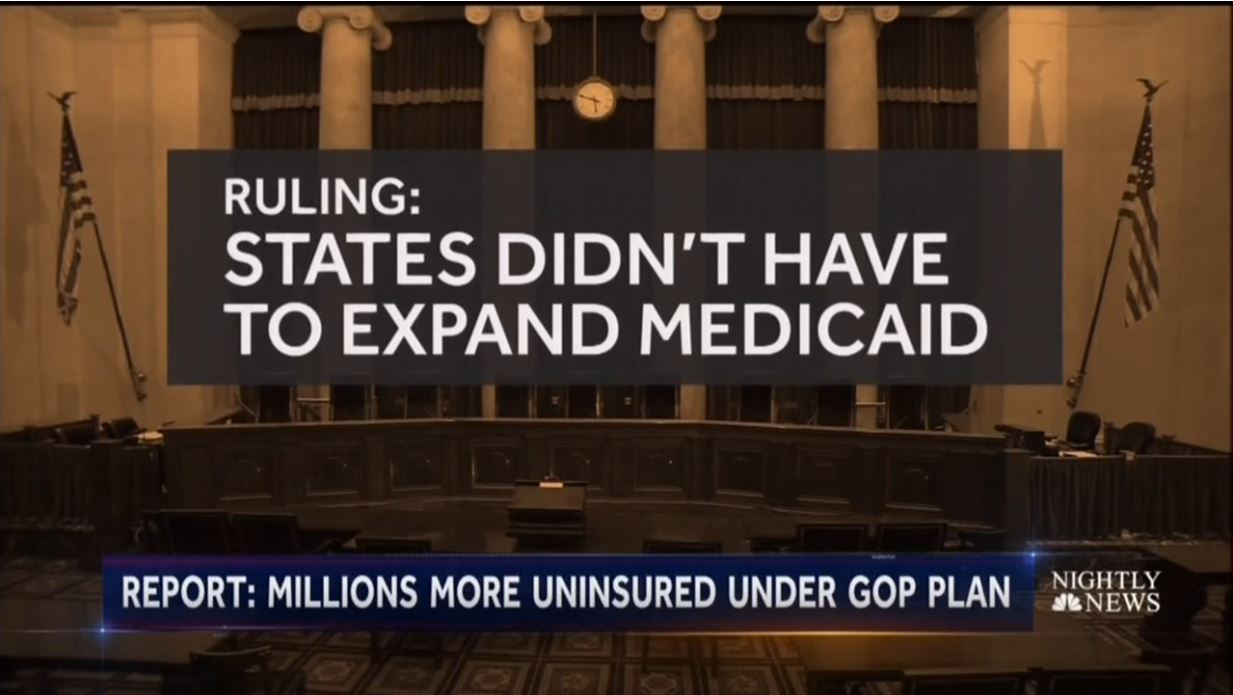 SEAN SPICER: The last time they did this, they were wildly off.

JACKSON: That enrollment estimate ended up off by 30%. Partly because the Supreme Court changed the expectation for expanding Medicaid coverage. Still, independent analysts found of all the estimates out there, the budget office came the closest.

STAN COLLENDER: The congressional budget office's only job in life is to get the numbers as close to accurate as they possibly can be.

JACKSON: The numbers that matter most to 62-year-old Kim Quode, the ones on her insurance bill.

KIM QUODE: After Obamacare really started to set in, my insurance premium doubled.

JACKSON: Under the GOP proposal right now, the life-long Republican would pay even more. Since she'd get less help from the government.

Today's report also finds the Republican bill would cut the federal deficit by roughly $340 billion over the next decade, something House Speaker Paul Ryan is already citing in defense of the plan. Lester?