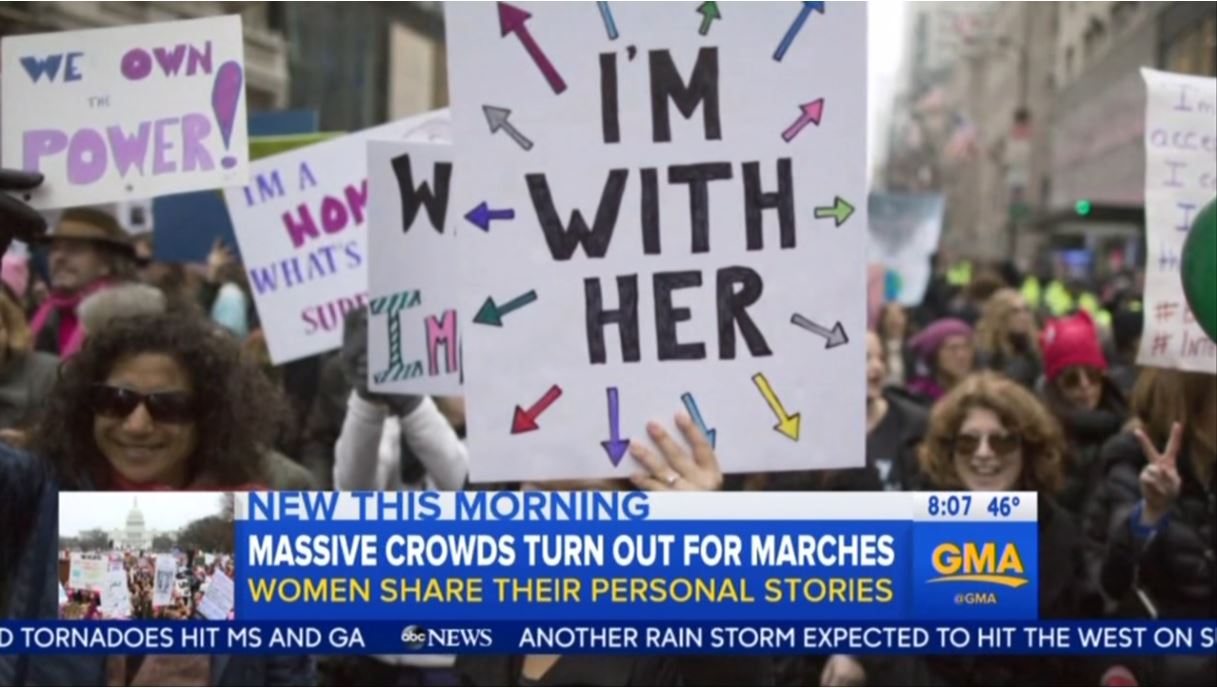 The Sunday following the anti-President Donald Trump Women’s March on Washington, network news rushed to spin the event as an inclusive event about putting the president on notice. “[Trump will] be confronting images, however, like this,” hyped Paula Farris on Good Morning America, “Hundreds of thousands of women, and men, hitting the streets.” There was no talk of the obscene parts of Ashley Judd’s hate filled tirade nor Madonna’s fantasy of “blowing up the White House,” only a fleeting mention on NBC.

ABC’s Matt Gutman started off by declaring the march was Trump’s “anti-inauguration,” which was followed up with video of the protestors chanting “Hey, hey, ho, ho, Donald Trump has got to go.” “A sea of protesters, bobbing in their pink beanies. waving placards, condemning President Donald Trump on his first day in office,” he praised.

As with most coverage conducted by ABC, they were drawn to the glitz of the Hollywood celebrity speakers. “Headlined by the kind of a-list celebrities that snubbed the president's inaugural,” Gutman mocked, “Madonna, a surprise speaker, didn't hold back.” The only video he played was the loony singer smearing the inauguration as a “horrific moment of darkness” for the country that “woke us the [bleep] up.”

No mention of Madonna’s message of “fuck you” to those who disagree with the march’s radical leftist positions. There was also no talk of Judd’s insane ranting proclaiming that Trump’s cabinet was filled with “Nazis,” her slamming of Ivanka Trump as the president’s “favorite sex symbol,” nor the lashing out at the South for being filled with racists.

On NBC’s Sunday Today, reporter Morgan Radford only showed Madonna shouting, “Welcome to the revolution,” while ignoring Judd’s craziness altogether. Instead, she chose to ridicule the newly inaugurated president by comparing the size of crowds, noting, “In D.C., this was the scene on inauguration day. The next day, the Washington mall packed with even more people demonstrating on President Trump's first day in office.”

The only mention of Madonna’s terroristic threat came from NBC anchor Willie Geist who had to read it from a statement from a White House official. “Comments like these are absolutely unacceptable, and had they been said about President Obama, the mainstream media would be in an uproar,” Geist read but without confirming that that was what the singer actually said.

But thanks to the White House statement, Geist did mention the upcoming March for Life event in Washington, DC on Friday, January, 27. The statement noted that the march gets roughly the same amount of people and called the media out for not paying attention to it. The statement added that pro-life groups were not welcomed at the Women’s March as official partners.

PAULA FARRIS: And good Sunday morning, everyone. Thank you for joining us. We have a full house here at GMA. Speaking of houses, President Donald Trump wakes up in his house, the White House, for his second full day in office. He'll be confronting images, however, like this. Hundreds of thousands of women, and men, hitting the streets.

DAN HARRIS: They were marching in Washington but also in cities across the country and the world. There were more than 600 marches on seven continents. We’ve got an image of an image of a small protest, in fact, in Iraq. And at the main March in Washington, this image of three generations from the same family. Going to the March together.

FARRIS: We do have team coverage this morning. But we’re going to start with ABC’s Matt Gutman, who was right out there, covering the marchers in Washington. Good morning, Matt.

MATT GUTMAN: Good morning, Paula. You might call it the anti-inauguration. Well over 1 million people spilled into cities nationwide to roar their protests of the election of President Trump on his first full day on the job. And while the protest here in Washington, DC was permitted for about 200,000 people, so many more spilled into this city that it seemed like it was besieged by an army of people in pink beanies.

By the hundreds of thousands, they streamed into the national mall.

GUTMAN: A sea of protesters, bobbing in their pink beanies. waving placards, condemning President Donald Trump on his first day in office.

CROWD: Welcome to your first day. We will not go away.

GUTMAN: And speaking out in support of women's rights.

CROWD: My body, my choice.

GUTMAN: Minute by minute, the crowd grew. Bursting through the planned routs and boisterously spilling out into the city's side streets. The transit systems jam packed. The scale was global. On every continent, they turned out. From Kenya, to Sydney, Australia, to Antarctica. In the president's hometown of New York, 400,000 demonstrated.

GUTMAN: So many, that police had to open up additional streets. Big turnouts in Los Angeles, Seattle, Atlanta, Chicago, and Miami. But all those protests anchored by that Woman's March on Washington.

ALICIA KEYS: This girl is on fire!

GUTMAN: Headlined by the kind of a-list celebrities that snubbed the president's inaugural. Madonna, a surprise speaker, didn't hold back.

MADONNA: It took this horrific moment of darkness to wake us the [ bleep ] Up.

GUTMAN: Ashley Judd, likely the most riled up.

ASHLEY JUDD: We are here to be respected. Hell, yeah!

GUTMAN: The rally got Hillary Clinton's attention. She tweeted, “Thanks for standing, speaking, and marching for our values.”

And the creativity. The big bands. The giant globe. And so many pink crocheted hats. People are converging here from every which direction. Everybody moving toward the White House. Along the way, old and young. 7-year-old Ellie from Maryland was riding on her Uncle Steve's shoulders. Have you ever seen this many people in your life?

GUTMAN: Her Uncle getting misty-eyed.

UNCLE STEVE: It's about the country that we're giving to her.

GUTMAN: It was chaotic. But it also seemed cathartic. And while President Trump was not around for much of time that those thousands of people surrounded the White House. It seemed they sent message that was impossible not to hear. The question is, is this the start of national movement or just a one-off grand event? Paula? Dan?

FARRIS: That's the big question that everyone is exploring. But that image from Antarctica, can't get that one out of your mind. Global involvement, Matt. Thank you very much.

WILLIE GEIST: But let us begin this morning with one of the largest single day protests in American history. More than 2 million marchers across the US speaking out against Donald Trump just one day after he took office. The main Women's March was in Washington with more than 600 sister marches taking place across the country and around the globe.

MORGAN RADFORD: Willie, we were with those marchers from start to finish, and from Los Angeles to New York, people completely packed the streets even in those smaller cities in between. But to give you a sense of context, that historic march on Washington in 1963, that got about 250,000 people. The 1995 million man March got about 400,000. That's what makes the March that ended right here behind me at Trump Tower nothing shy of historic.

Coast to coast and across the world, demonstrators turned out in force for the women's March with pink hats, bright signs and a big message.

PROTESTER: I want my daughter to know she has a voice.

RADFORD: People spilling into the streets, their message underscored with star power.

MADONNA: Welcome to the revolution!

GLORIA STEINEM: This is a day that will change us forever because we are together.

RADFORD: By the people and by the president.

MICHEAL MOORE: Mr. Trump, we are here to vow to end the Trump carnage!

RADFORD: In D.C., this was the scene on inauguration day. The next day, the Washington mall packed with even more people demonstrating on President Trump's first day in office. In New York, thousands pounding the pavement in front of trump tower.

GEIST: And some breaking news this morning. The White House reacting to the marches, focusing again on the media. A top White House official telling NBC News, quote: 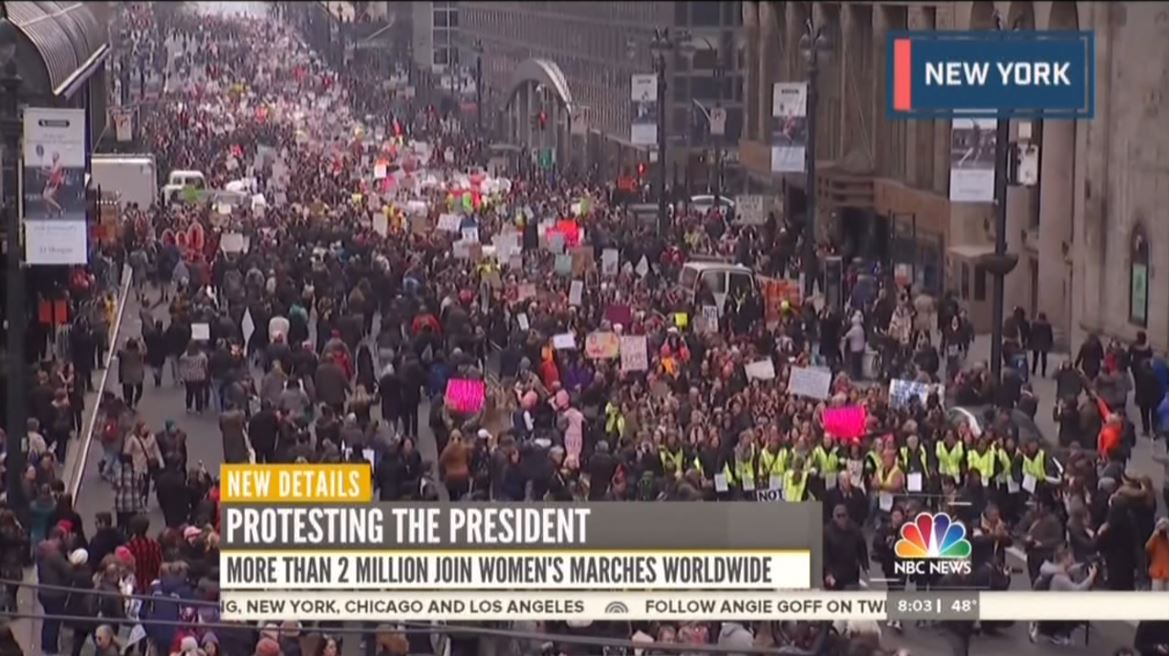 It's a shame that the March for Life, which estimates the same number of marchers in DC (650,000 in 2013) and will be happening next Friday, will not get anywhere near the same amount of coverage that this march got and those pro-life members were not welcome at the Women's March. The organizers noted that their platform was pro-choice and they revoked partnership status from pro-life groups.

The statement goes on:

Madonna, who was one of the celebrities headlining the March was quoted as saying, “Yes, I thought an awful lot about blowing up the White House. Comments like these are absolutely unacceptable, and had they been said about President Obama, the mainstream media would be in an uproar. The Trump administration welcomes a robust discussion regarding the critical issues facing America’s women and families.