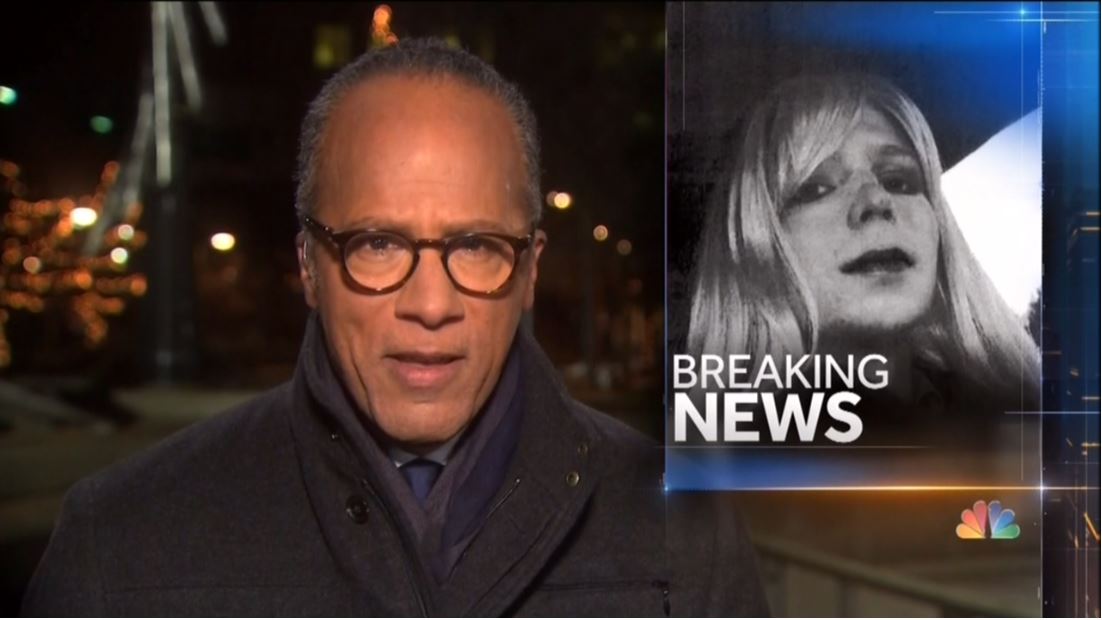 Late Tuesday afternoon the White House announced a list of 64 convicted criminals they planned to pardon, including 209 others whose sentences were being shortened. “The Obama presidency is ending on a note of forgiveness,” declared anchor Scott Pelley at the start of CBS Evening News. One of the most controversial sentence commutations was that of Private Chelsea Manning, who stole and released thousands of classified documents to WikiLeaks. The network most excited by the development, by far, was NBC, but none dared to cover the release of an unrepentant terrorist.

“I think justice was finally done today. 35 years was not an appropriate sentence,” Manning’s lawyer, David Coombs, told reporter Cynthia McFadden on NBC Nightly News. “The commutation is not a pardon. Her conviction still stands but her sentence has been reduced to the seven years she will have completed in the next few months,” McFadden explained.

“The case broke in 2010 with all the makings of a spy thriller,” hyped McFadden, who seemed eager to dramatize the story, “The day after Manning was convicted, another bombshell when Manning announced she was a transgender woman now known as Chelsea.”

The NBC reporter teed up Coombs to smear the case against his client, ridiculously asking, “Was the government able to point to any specific damage as a result of the releases from Chelsea Manning?” But she never mentioned any alleged damage claimed by the federal government. In fact, none of the networks did.

According to Fox News’ Catherine Herridge on Special Report, “My contacts inside the intelligence community say, that after the documents were published, the Taliban and went on a killing spree. If they saw a description of someone with short dark hair working with the US Government, they just went out and killed everyone with short dark hair.” She also noted that this hurt the US’s ability to recruit new informants.

The Associated Press reported, in the summer of 2013, said that some of those documents were found in Osama bin Laden’s compound during the raid that killed him. They added that Al-Qaeda’s leaders urged “members to study them before devising ways to attack the United States.”

None of the networks mentioned President Barack Obama’s complete turnaround in regards to Manning. Originally the president was very outspoken about the Manning’s guilt, but clearly, thinks she has done enough time. Apparently leaking US intelligence to WikiLeaks is not as bad as leaking DNC e-mails.

The Manning story provided fantastic cover for the networks to overlook Obama’s commutation of unrepentant Puerto Rican terrorist Oscar Lopez-Rivera. “He was convicted of seditious conspiracy and arms trafficking in connection with his leadership of the FALN, the notorious left-wing terrorist group that perpetrated more than 130 attacks on U.S. soil from the mid-1970s through the mid-1980s,” reported the National Review. Only the Spanish-language networks covered this important facet of the story.

The Review also recalled how Hillary Clinton tried to have her husband offer clemency to the terrorist, and others, in an effort to get Puerto Rican votes for her run to be a New York Senator. “The plan quickly began to implode when both branches of Congress overwhelmingly condemned it and the administration failed to get all twelve terrorists to agree to its conditions,” they added.

LESTER HOLT: We start off with breaking news out of Washington. Just three days from the end of his term, the White House announced President Obama has ordered clemency for over 200 prison inmates. Among the most notable and controversial, Chelsea Manning, the former army intelligence analyst who was convicted for passing classified government material to WikiLeaks and whose imprisonment as a transgender woman has been fraught with complications. The president commuting Manning sentence ordering her to be released this spring. NBC’s Cynthia McFadden has late details.

CYNTHIA MCFADDEN: Chelsea Manning, the army private convicted of leaking thousands of secret military and diplomatic documents will be free in May. President Obama announced late this afternoon he will commute her 35-year sentence.

DAVID COOMBS: I think justice was finally done today. 35 years was not an appropriate sentence.

MCFADDEN: The commutation is not a pardon. Her conviction still stands but her sentence has been reduced to the seven years she will have completed in the next few months.

MCFADDEN: The case broke in 2010 with all the makings of a spy thriller. 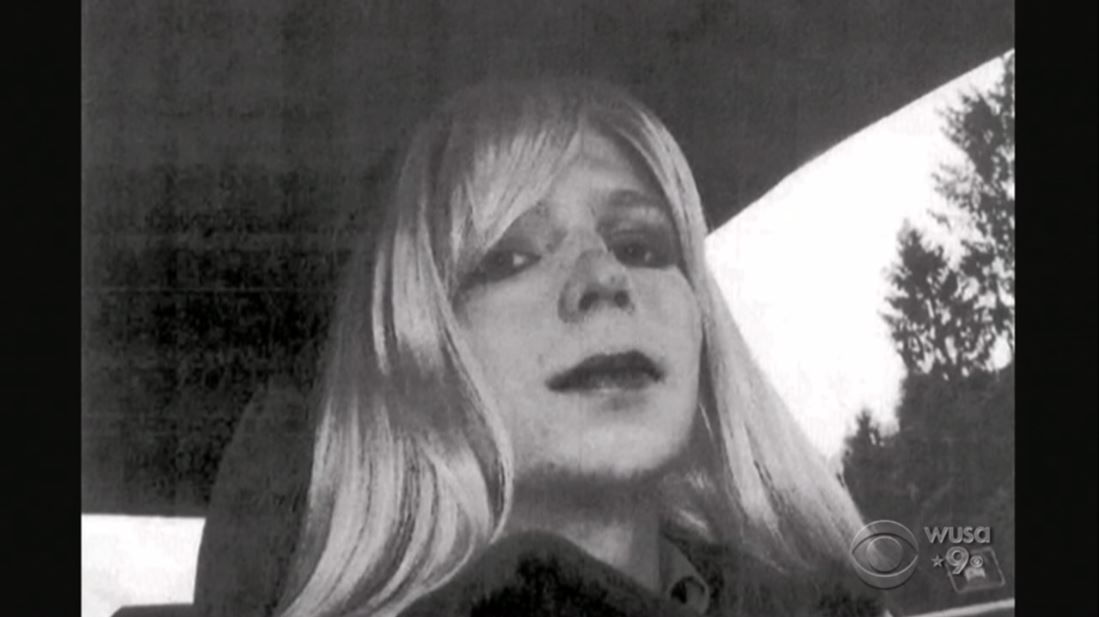 MCFADDEN: The day after Manning was convicted, another bombshell when Manning announced she was a transgender woman now known as Chelsea. Manning twice tried to commit suicide last year. She's currently incarcerated in the male military prison in Leavenworth, Kansas.

Was the government able to point to any specific damage as a result of the releases from Chelsea Manning?

COOMBS: No, they were not. And we had secret sessions of the court-martial where that would be the place the government would do that. And the answer was no. What they would be able to show and what they did show was certain diplomats had their feelings hurt. Certain countries were upset.

MCFADDEN: At her trial she apologized for her actions that was apology was never heard outside the courtroom until last week when NBC news broadcast it.

CHELSEA MANNING: I can only go forward. I want to go forward. Before I can do that, I understand that I must pay a price for my decisions and actions.

MCFADDEN: Today, President Obama decided that debt has been paid.

Sources inside the intelligence community believe the reason Manning sentence was so stiff was because Edward Snowden's massive leaks came to light just as Manning was being sentenced. Snowden was beyond the reach of the US in Russia. Manning paid the price. A petition for pardon for Mr. Snowden with over a million signatures was not acted upon by the White House.

BRET BAIER: What did Chelsea Manning, what did it mean? What kind of damage did it do, the leak itself?

CATHRINE HERRIDGE: Ok so, in 2010 soothing called the Afghan War Diary was leaked. These are incident reports outside of Afghanistan. And my contacts inside the intelligence community say that after the documents were published the Taliban and went on a killing spree. If they saw a description of someone with short dark hair working with the US Government, they just went out and killed everyone with short dark hair. They were not discriminating at all in terms of the target. And that’s not just say-- people who are working with the US government were killed, but it certainly made it much harder to recruit intelligence assets in the future.