ABC Harps on Trump’s Conflicts of Interest, Not for Clinton’s 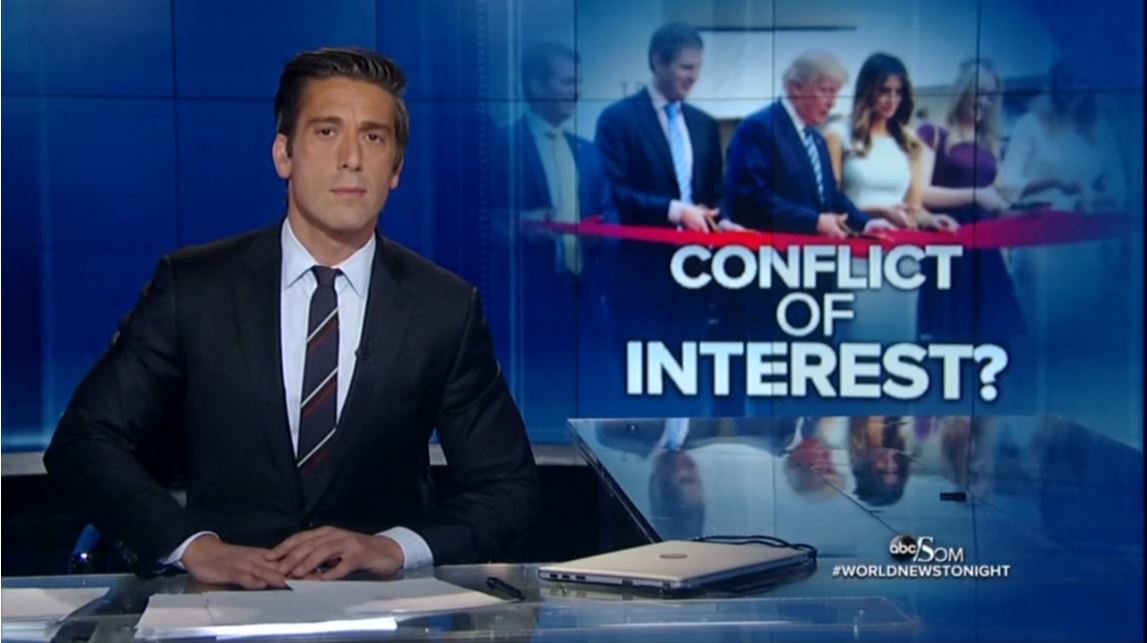 ABC’s World News Tonight went to town Tuesday evening, as they fanned the flames of fear over potential conflicts of interest between President-Elect Donald Trump’s businesses and his presidential duties. “With growing concerns tonight, about how he continues to push his business ventures, Donald Trump told The New York Times, ‘The law is on my side. The president can't have a conflict of interest,’” fretted ABC’s Chief investigative Correspondent Brain Ross. But such concern over conflicts of interest were scant when they covered Hillary Clinton pre-election.

“In the two weeks since the election, Trump has taken the time to meet with the Indian developers of two Trump Towers in their country, who posted this picture and then took it down,” reported Ross. He also whined about Trump talking about wind turbines near his golf club in Scotland with a British politician, and his daughter Ivanka sitting in on a call with Japan’s prime minister.

But back in October, ABC completely ignored the WikiLeaks e-mail exposing how the king of Morocco donated $12 million to the Clinton Foundation. In exchange for the money, the king expected a private meeting with the former secretary of state. The donation came just before she planned to announce her doomed run for president.

“Trump has investments or deals in at least 18 countries around the world,” Ross warned, but yet the Clinton Foundation takes in money from dignitaries from all over the world. And the Associated Press confirmed that, “More than half the people outside the government who met with Hillary Clinton while she was secretary of state gave money — either personally or through companies or groups — to the Clinton Foundation.”

From there, Ross’ report took an interesting turn when he interviewed Peter Schweizer. He is author of the book Clinton Cash, which talked about many of the underhanded and sleazy ways the Clintons became uber-wealthy through speeches, favors, and donations. “You're going to have foreign entities, foreign governments offering sweetheart deals in the hope of favorable action from the president of the United States,” Schweizer told Ross.

It’s peculiar that ABC suddenly cares about what Schweizer is concerned about now. Especially after ABC’s resident Clinton lackey, George Stephanopoulos, colluded with the Clinton campaign to discredit Schweizer and his work regarding the ABC moderator’s former employer.

Ross also feared about how Trump would handle a German bank that is being investigated by the US government and is looking at a $14 billion settlement. The bank in question issued loans to Trump so he could build many resorts and other projects. Ross hyped the actions taken by Democratic Senator Richard Blumenthal who, “is calling for a special prosecutor to make sure the justice department does not back down.”

It’s amazing how much a network cares about conflicts of interest when the candidate they didn’t want becomes the president-elect.

DAVID MUIR: Mr. Trump was also asked about his business, and potential conflicts of interest. The president-elect once saying in the campaign, if elected, "I couldn't care less about my company, it's peanuts." Here's ABC's Chief Investigative Correspondent, Brian Ross.

BRIAN ROSS: With growing concerns tonight, about how he continues to push his business ventures, Donald Trump told The New York Times, "The law is on my side. The president can't have a conflict of interest." But throughout the campaign, Trump had pledged to leave his business empire behind.

DONALD TRUMP: If I become president, I couldn't care less about my company.

ROSS: Yet, in the two weeks since the election, Trump has taken the time to meet with the Indian developers of two Trump Towers in their country, who posted this picture and then took it down. He complained to a British politician about eye sore wind turbines near his Scottish golf course. And he’s boasted his brand is hotter than ever. His daughter Ivanka's jewelry company tried to cash in on her appearance on 60 Minutes to sell her line of $10,000 bracelets. 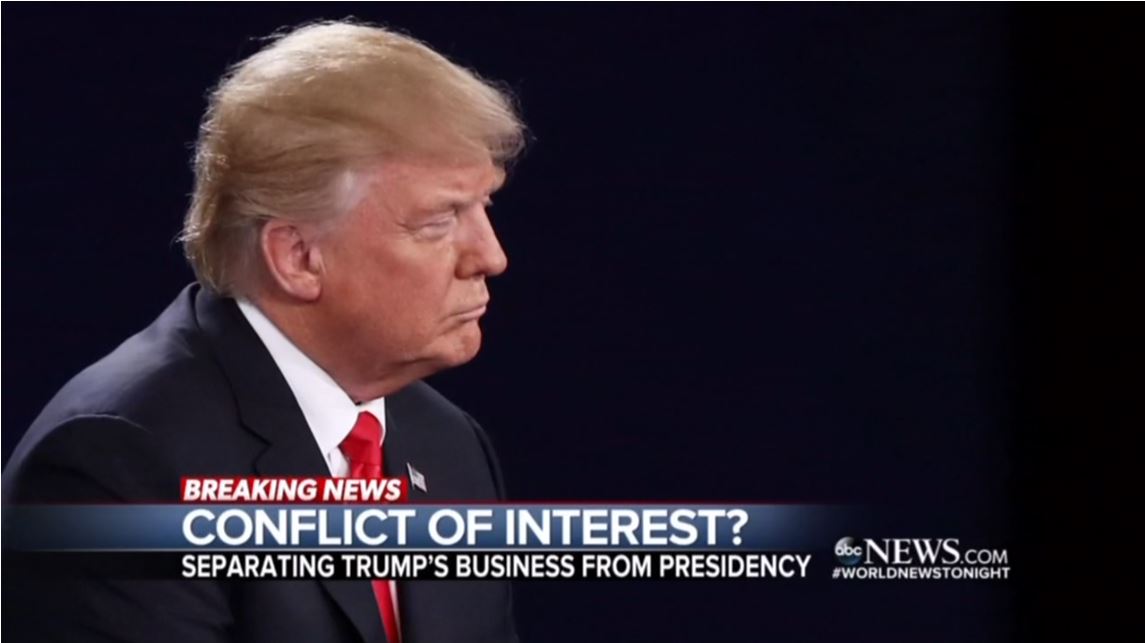 Since then, Trump has included his daughter in a meeting with the Japanese prime minister, as she prepared to take over his company, which already has been seeking deals in Asia. Trump defended that today, saying, "If it were up to some people, I would never, ever see my daughter Ivanka again." Trump has investments or deals in at least 18 countries around the world. Now, some of his own advisers fear the president-elect is already creating conflicts.

PETER SCHWEIZER: You're going to have foreign entities, foreign governments offering sweetheart deals in the hope of favorable action from the president of the United States.

ROSS: And today, there are questions whether Trump, as president, would take actions to huge German bank, which has loaned him more than $300 million. Trump used the money to buy the Doral golf course in Florida and build hotels in Chicago and his new one in Washington. But Deutsche Bank is also now the target of two major investigations by the US Department of Justice, facing a possible $14 billion settlement, which could imperil the bank and effect Trump's loans. Senator Richard Blumenthal, a Democrat, is calling for a special prosecutor to make sure the justice department does not back down.

RICHARD BLUMENTHAL: There's a clear conflict of interest between Donald Trump's personal business interests and his public duties, in fact, his public trust.

ROSS: Not for Donald Trump, who said today, "In theory, I could run my business perfectly and then run the country perfectly," adding, "There's never been a case like this."

MUIR: Brian Ross is with us tonight. And the president-elect said something more to The New York Times, in fact, he said, "The law is totally on my side here."

ROSS: Well, that’s right David. There is no low that specifically requires the president to give up his business or put it in a blind trust. Trump says he'd like to do something to address ethics issues, but he also seems to be suggesting that he could continue to be involved with his business in some limited way and there's nothing legally to prevent him from doing that, David.

MUIR: The scrutiny that comes when you're elected president. Brian tonight, thank you.