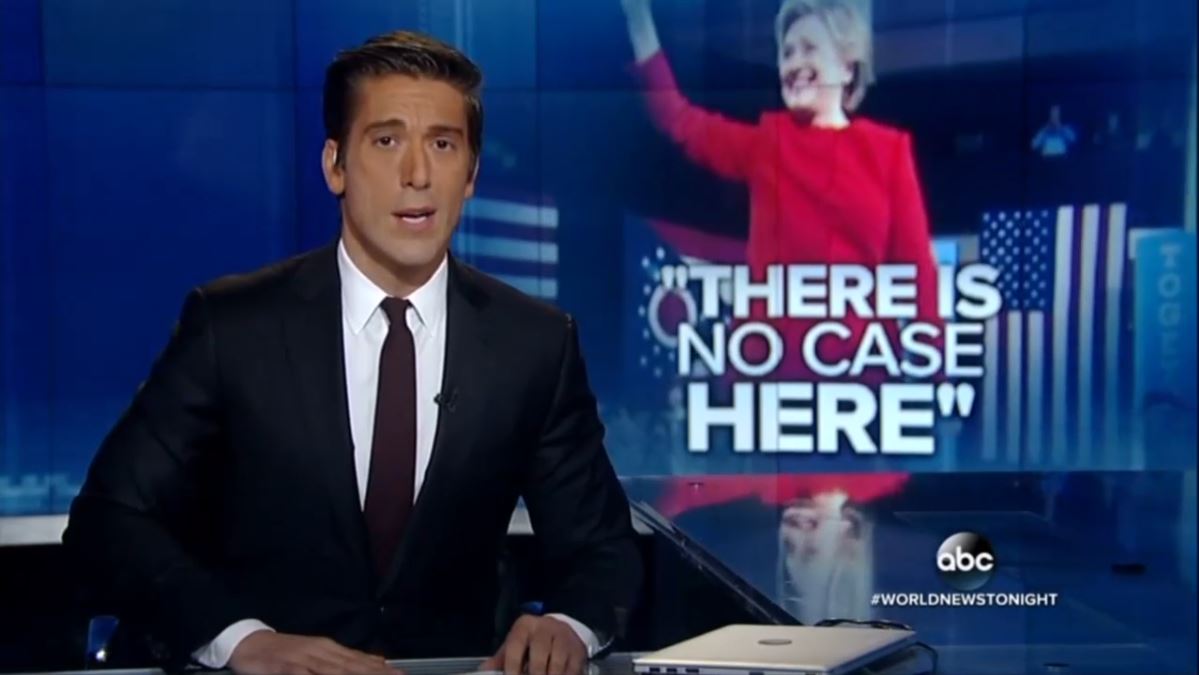 In the wake of the FBI’s announcement on Friday, that they discovered new e-mails possibly pertaining to Hillary Clinton’s private server, the liberal networks have taken every opportunity to slam FBI Director James Comey and cast doubt on his investigation. It was the exact same thing on Monday as ABC, CBS, and NBC joined the “chorus” of Democrats criticizing the FBI Director. “Hillary Clinton, meantime, in the battleground of Ohio, where early voting is already under way, telling voters, quote, “There is no case here,” announced ABC Anchor David Muir on World News Tonight.

NBC’s Andrea Mitchell was more than happy to aid her favorite candidate, which is no surprise after seeing how distraught the whole ordeal made her over the weekend. “The Clinton campaign seizing moments ago on a new report that FBI director James Comey was reluctant to publicly blame Russia for cyber hacking Democrats this close to the election,” she parroted the campaign’s talking points on NBC Nightly News, “They called that a jaw-dropping double standard given the revelations about top Clinton aide Huma Abedin.”

On ABC’s World News Tonight, reporter Cecilia Vega left it up to Clinton herself to do the slamming by playing extended clips of Clinton arguing that the timing of the investigation was suspect. Vega’s real aid came in the form calming Clinton’s worried supporters. She first touted the Clinton campaign’s get out the vote effort in early voting swing states. Then she interviewed supporters at a Clinton rally to gauge there concern about the investigation. One supporter to told Vega, “I don’t give a s—[Cuts herself off]… I don’t care,” while others said it does not change their vote.

On CBS, Anchor Scott Pelley touted a recent poll conducted by the network that showed, “50 percent of Democrats in those states told us that the investigation did not change their minds about voting for her. Only 5 percent said that it did.”

But this kind of vitriol from the liberal media is to be expected. As the Media Research Center’s Rich Noyes stated on Fox and Friends Sunday, “We’ve seen this play before.” Often members of the media help the Clinton’s carry their burdens and turn their guns on anyone gutsy enough to investigate them.

DAVID MUIR: Hillary Clinton, meantime, in the battleground of Ohio, where early voting is already under way, telling voters, quote, “there is no case here.” And they are now fighting to keep whatever they might have, the fire wall in some of the battlegrounds with early voters, who they know are heading to the polls right now. ABC's Cecilia Vega in Ohio.

CECILIA VEGA: In Ohio, where voting is already under way, tonight, Hillary Clinton trying to tackle the political firestorm engulfing her campaign.

HILLARY CLINTON: I'm sure a lot of you may be asking what this new e-mail story is about, and why in the world the FBI would decide to jump into an election with no evidence of any wrongdoing, with just days to go. That's a good question. 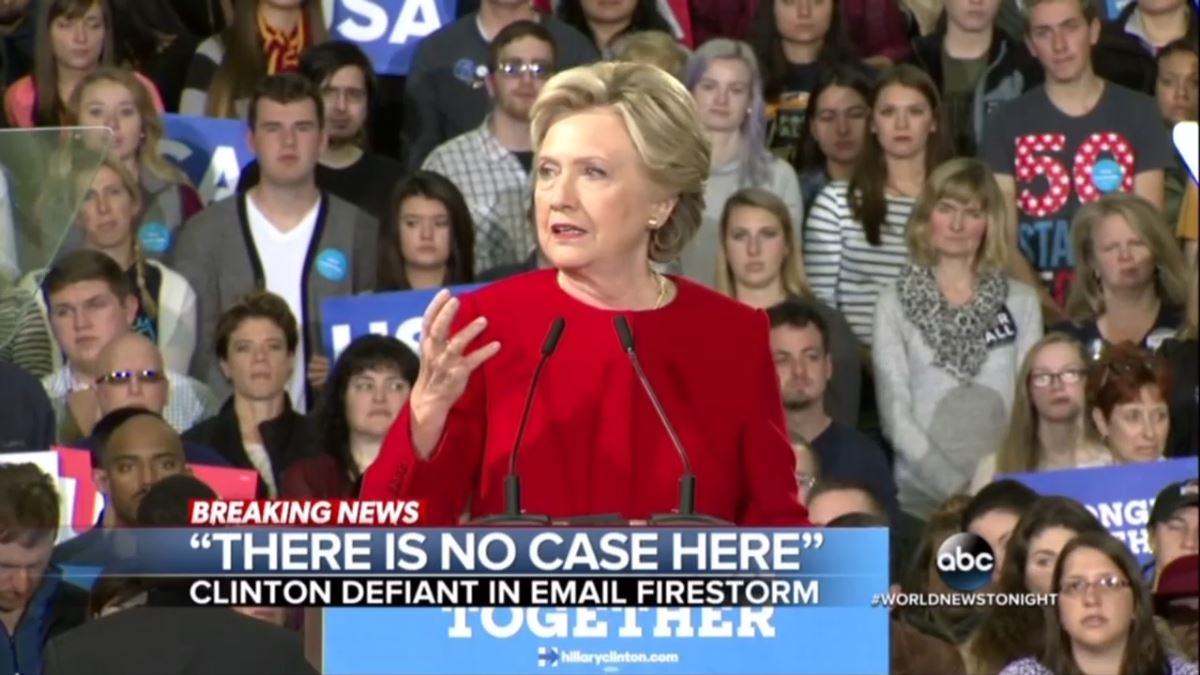 CLINTON: And I am sure they will reach the same conclusion they did when they looked at my e-mails for the last year. There is no case here.

VEGA: Clinton's team now counting on their get out the vote operation. More than 23 million votes already cast. Democrats outpacing Republicans in battlegrounds like North Carolina and Nevada. But in all-important Florida, where Clinton campaigned this weekend, it is Republicans with a slight edge in early voting. Here in Ohio, most Clinton supporters we spoke to brushed off this new chapter in the e-mail saga. If I say to you, Hillary Clinton and e-mails, you say –

UNIDENTIFIED CLINTON SUPPORTER 1: I don’t give a s—[Cuts herself off]

UNIDENTIFIED CLINTON SUPPORTER 2: I don’t believe it and you know—

VEGA [to supporter 1]: You can’t even say the word you want to say.

VEGA: Does this make you reconsider your vote at all?

UNIDENTIFIED CLINTON SUPPORTER 3: Not at all.

LESTER HOLT: Eight days to go, both campaigns scrambling to respond to this late stunner. Hillary Clinton and her supporters questioning the timing by the FBI director, so close to the election. And the Trump campaign seizing what it sees as an opening. We have it all covered starting with Andrea Mitchell on the trail in Ohio with late developments. Andrea, good evening.

ANDREA MITCHELL: Good evening, Lester. The Clinton campaign seizing moments ago on a new report that FBI director James Comey was reluctant to publicly blame Russia for cyber hacking Democrats this close to the election. They called that a jaw-dropping double standard given the revelations about top Clinton aide Huma Abedin. This is the latest Clinton slam on Comey.

Tonight top Hillary Clinton aide Huma Abedin not on the trail with Clinton, as Clinton intensified her attack on FBI director James Comey, trying to rally the base and reassure undecided voters about the e-mail controversy.

HILLARY CLINTON: I'm not making excuses. I've said it was a mistake and I regret it. And now they apparently want to look at e-mails one of my staffers -- and I am sure they will reach the same conclusion they did when they looked at my e-mails for the last year. There is no case here! 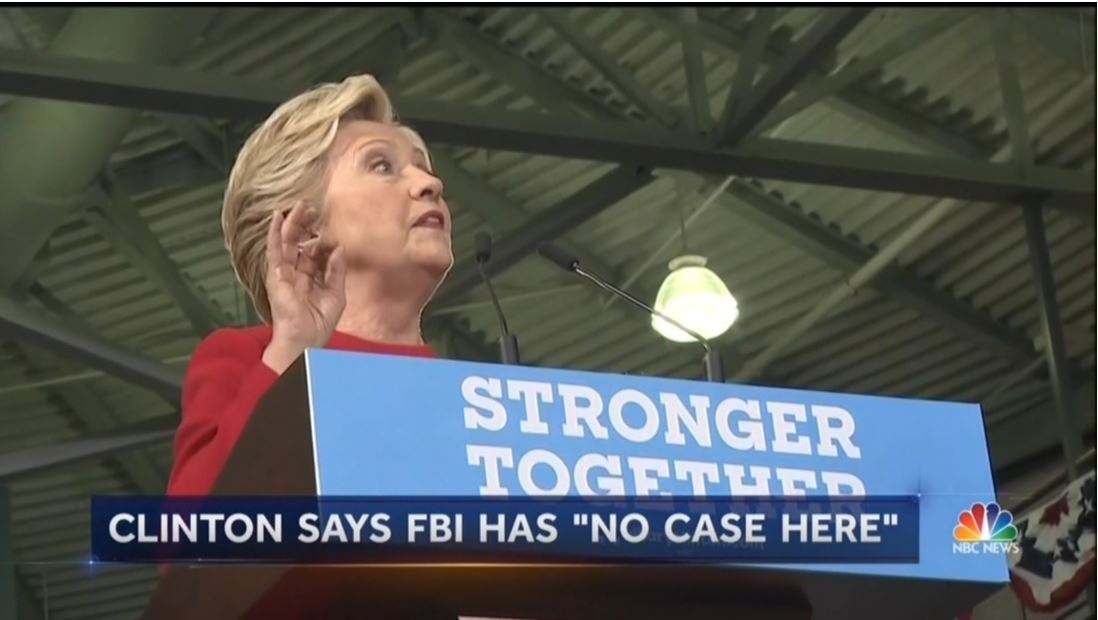 MITCHELL: Just a few months ago, Clinton and other Democrats praising Comey for not pursuing criminal charges against her.

CLINTON: I'm grateful for the professionalism of the FBI.

TIM KAINE: He's somebody with the highest standards of integrity.

NANCY PELOSI: This is a great man.

BARBARA BOXER: I call it an October betrayal of long-standing FBI protocol.

MITCHELL: But the White House not joining the chorus.

JOSH EARNEST: I'll neither defend nor criticize what Director Comey has decided to communicate to the public.

MITCHELL: Tonight the Clinton campaign saying it was blindsided by the FBI's announcement and expressing confidence in Abedin. Considered a surrogate daughter, Bill Clinton officiating at her glamourous wedding to Anthony Weiner. And after Wiener's sexting scandal, his wife taking part in a documentary intended to revive his political career.