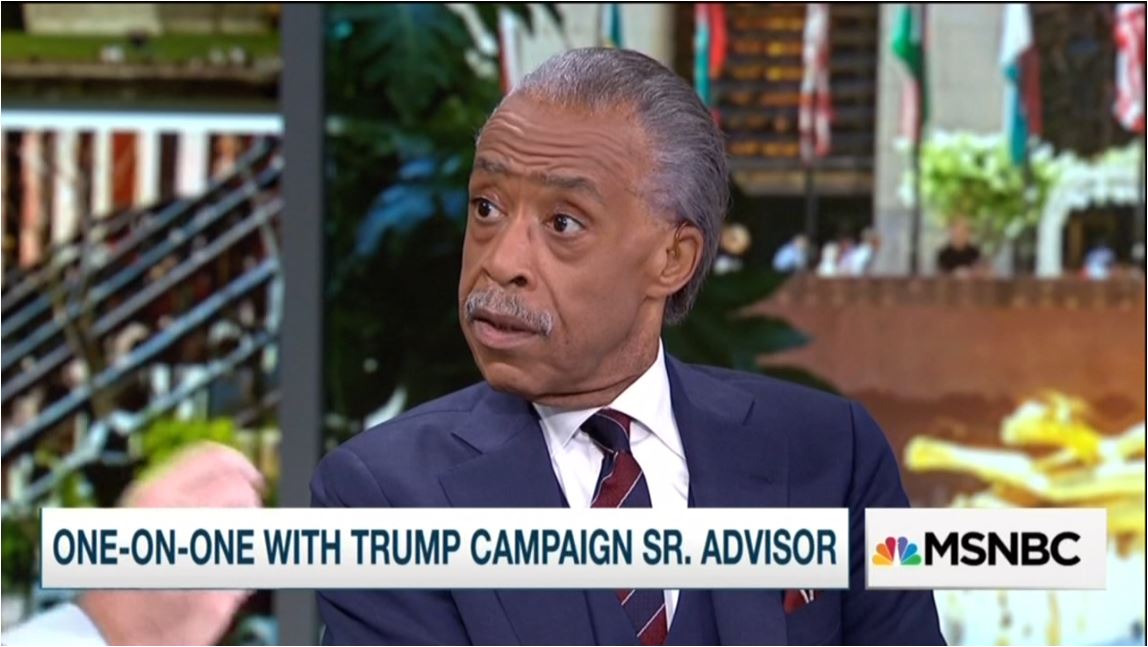 Tax dodger and riot starter Al Sharpton had a bone to pick with GOP nominee Donald Trump, on his MSNBC Sunday show Politics Nation, for playing coy with accepting the outcome of the election. Sharpton brought on Trump’s Senior Campaign Adviser Boris Epshteyn to browbeat him over the comments saying, “Boris, just how big would Clinton's win have to be for Trump to admit it is, quote, “Not questionable?”” But Epshteyn quickly turned the tables and left Sharpton confused by merely mentioning the explosive new Project Veritas videos.

Sharpton was on the attack right out of the gate. The MSNBC host, without citing his source, claimed that it was known that Trump supporters would be out at the polls looking for minorities. “One guy said to racially profile, you're not talking about integrity,” he stated, “These are your guys, these are poll watchers, this is your candidate talking about voter fraud that doesn't exist.” Again, Sharpton argued that Trump is talking about “voter fraud that doesn't exist,” but he would later contradicted himself.

Epshteyn began to list off the instances of voter fraud known to have occurred in 2008, and noted the reason there was no prosecutions out the election was because the Obama Justice Department didn’t pursue them. To which Sharpton replied, “But people in New York State have gone to jail for messing with elections,” directly contradicting his earlier claim that voter fraud “doesn’t exist.”

He continued to press Epshteyn on the circumstances under which Trump would accept a Clinton victory in November. “Listen, as long as there is no instances that are similar to the Clintons paying for violence at Trump rallies,” he explained. Appearing to be highly perplexed by his guest, Sharpton repeated it back to him saying, “Well, we know that's what someone alleged with WikiLeaks.”

Epshteyn seemed shocked by Sharpton’s ignorance on the subject, and upon an explanation of the details Sharpton exclaimed, “Oh, you're talking about the heavily edited video… Fine.” Epstein could barely keep himself from laughing in Sharpton’s face, since just a few seconds prior he had not a clue about the video. Perhaps Sharpton was just reverting back to the liberal talking points for James O’Keefe’s ACORN videos.

Sharpton congratulated Epshteyn for representing Trump so well and declared his facts “a good distraction” and “a good pivot,” and then quickly hid behind hyperbole by asking, “Do you understand what it does to kids that watch this?”  But the fact that some of the people exposed in the videos have lost their jobs proves that there is for more truth to the footage than left would want to admit.

BORIS EPSHTEYN: Of course, thanks for having me.

SHARPTON: Boris, just how big would Clinton's win have to be for Trump to admit it is, quote, “not questionable?”

EPSHTEYN: It is not about the size of -- or any difference in the election, and Donald Trump is going to win. So it is not about Hillary Clinton's, you know, supposed win that is not going to happen. The issue here, and we should be agreeing on this, is we want for the election to have integrity, to be proper, and then to be verified and certified and then there won't be any issues.

SHARPTON: We agree with that. But when you raise issues like voter fraud, that have not been verified by the Bush Justice Department, when you have people going out to poll watch, who have said to reporters, they're there to profile people. One guy said to racially profile, you're not talking about integrity.

EPSHTEYN: I can find a guy who says a lot of things. Right?

SHARPTON: It’s not about finding a guy. These are your guys, these are poll watchers, this is your candidate talking about voter fraud that doesn't exist.

EPSHTEYN: These are not our guys. Let’s talk about voter fraud. I was on McCain campaign in 2008. And on that campaign, we witnessed some of the following things. In Nevada, they had to hold Dallas Cowboys starting lineup red shirt to vote. In Ohio, we had people being bused from other states–

SHARPTON: Did you turn it in?

EPSHTEYN: Of course we turned it in.

SHARPTON: And were they found to be credible?

SHARPTON: Why does the Justice Department even at that time report that voter fraud is 0.0003?

EPSHTEYN: It also has to be the fact, “What do you count as voter fraud?” Voter fraud is the following things--

SHARPTON: If someone was registering people that was the Cowboys team–

EPSHTEYN: That happened in Nevada. ACORN was conducting widespread, widespread voter fraud. In Ohio, you had bussing from Illinois to Ohio where you could register and vote on the same day. And Colorado, we now know there were dead people voting.

SHARPTON: But why does the data not show this? I mean, we talked about ACORN, who in ACORN went to jail for voter fraud? Name one. [Epstein goes to answer and is then cut off] But you say very verifiable. Verify it. 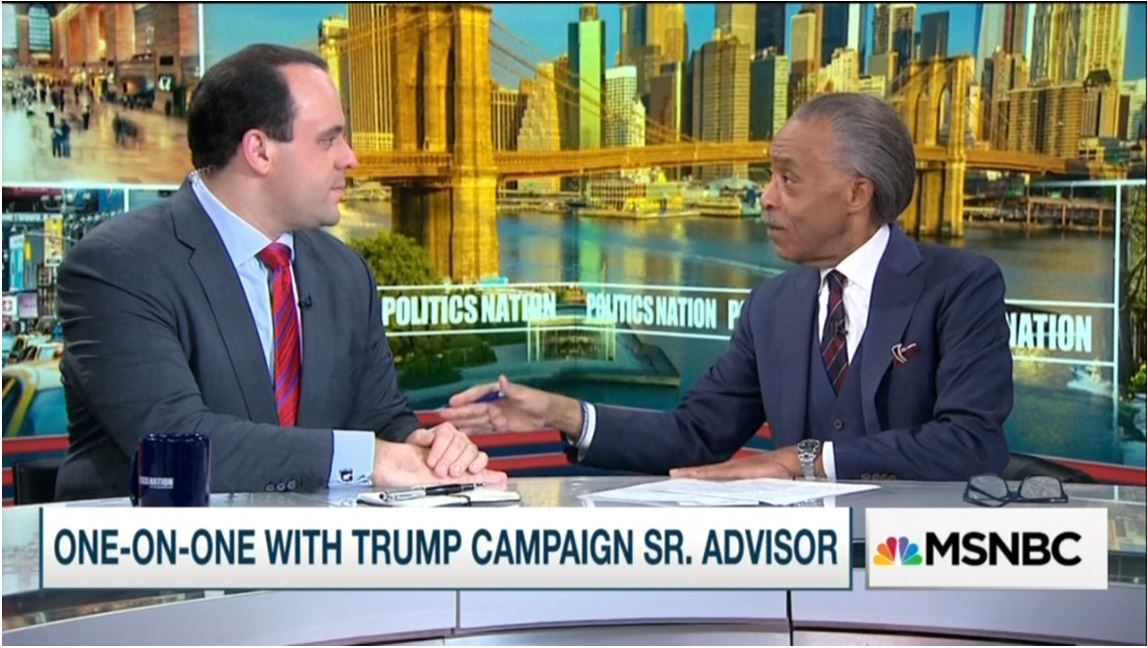 EPSHTEYN: The fact that ACORN didn't go to jail, they –

SHARPTON: But voter fraud is the crime.

SHARPTON: Voter fraud is a crime.

EPSHTEYN: I agree with you.

EPSHTEYN: It is a federal crime.

SHARPTON: But people in New York State have gone to jail for messing with elections.

EPSHTEYN: Great, and so we should have more of them go to jail.

SHARPTON: Come on. It is bogus, Boris.

SHARPTON: Will Trump accept the outcome of the election?

EPSHTEYN: He will win the election. And as long –

SHARPTON: If he doesn't win, will he accept the outcome of the election?

SHARPTON: The Clintons paying for violence at Trump rallies?

EPSHTEYN: We now know, right, from Project Veritas. We know—

SHARPTON: Well, we know that's what someone alleged with WikiLeaks.

EPSHTEYN: No, no, that happened from the Veritas video from the gentleman that has been to the White House over 340 times, part of the Democrat machine who has now been fired and he was inciting violence –

SHARPTON: Oh, you're talking about the heavily edited video.

SHARPTON: Fine. That's a good distraction to use your candidate's point, that's a good pivot. Will he accept the outcome of the election?

EPSHTEYN: To be fair, you are taking the words out of context. And he said, literally-- I think within the next sentence, or a few sentences, he said of course I'll accept it as long as everything is proper.