One of Hillary Clinton’s biggest fans, Andrea Mitchell, was on NBC’s Meet the Press on Sunday to talk, among other things, about Clinton’s week. It seemed as though she couldn’t help but moan about the optics surrounding Bill Clinton’s secret meeting with Attorney General Loretta Lynch. Sounding distraught she whined that even if Clinton was exonerated, “There will be suspicions that it was politically influenced. This was absolutely a disastrous decision on their part.”

Mitchell claimed the meeting was an “unforced error” by the Clinton campaign. She continued the liberal media narrative that Bill meet with Lynch because he is a social guy. She explained it away as Bill Clinton being the “schmoozer-in-chief.” The reporter was upset that neither one of them thought to bring the meeting “any place in public” for people to see.

But Mitchell’s spirit did pick up when she imagined different optics of a Clinton on an airplane. But this time it was Hillary Clinton exiting Air Force One with President Barack Obama:

I was told that there was a plan, a possible plan for her to fly in on Tuesday with this first Obama meeting to North Carolina on Air Force One! The full embrace! The Picture! … Coming out— You see the door of the plane opens, there are the two of them arm-in-arm!

“Not now,” said moderator Chuck Todd dashing her dreams. But Mitchell still held out hope, “Well, maybe they’ll still do it. But it make is it really hard for the president while this is pending from his Justice Department.”

CHUCK TODD: Donald Trump has his own reaction to the FBI interview. And he's already come to a conclusion. This is what he tweeted, quote, "It was just announced by sources that no charges will be brought against crooked Hillary Clinton. Like I said, the system is totally rigged." Andrea Mitchell, even if she's exonerated, Donald Trump already has his talking point thanks to the tarmac meeting. 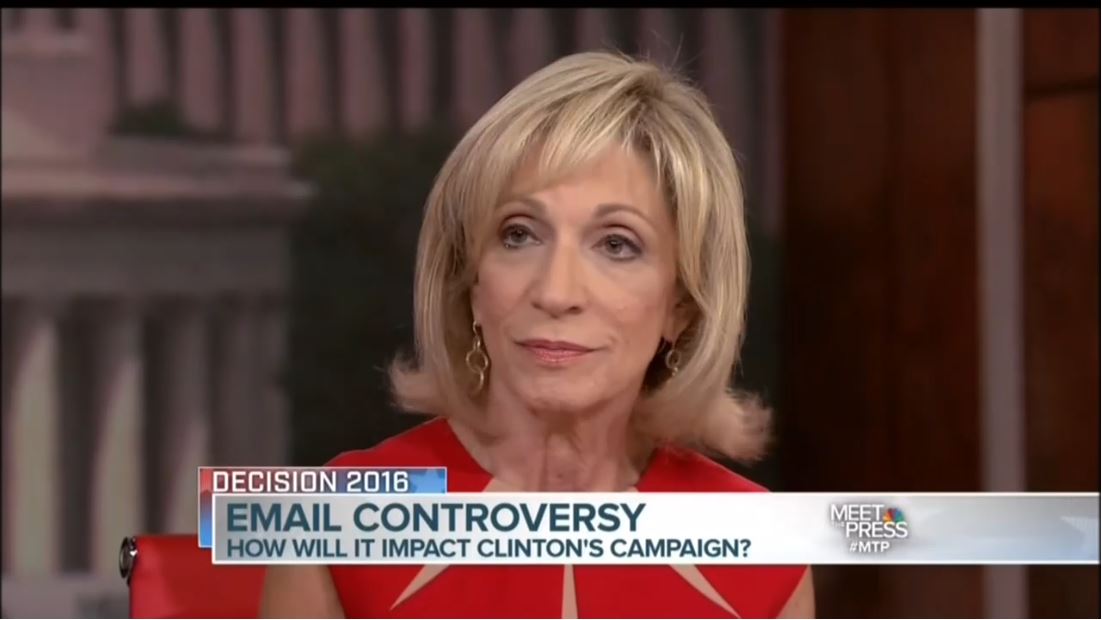 ANDREA MITCHELL: Thanks to the tarmac meeting. Well first of all, he's been calling her crooked Hillary for quite a while, so that is branding her in advance. But the tarmac meeting— Such an unforced error, inexplicably. Bill Clinton the schmoozer-in-chief— we all know the, “oh there’s a motorcade let me go over and…

But, something should have told this former constitutional law professor from Arkansas not to do it. Something should have told Loretta lynch to say, “Mr. President, let's go down”— I know it was 108 degrees, we checked— “on the tarmac.” They could have walked into the terminal, any place in public. To be on that plane for 30 minutes, now no matter what happens, if she is exonerated, she will still be -- there will still be suspicions, not only among the Donald Trump people, but among a lot of other people.  There will be suspicions that it was politically influenced. This was absolutely a disastrous decision on their part.

TODD: He [Peter Hart – Democratic Pollster] and other Democrats believe her campaign is not doing enough on her own likability issue.

MITCHELL: Well, they’ve got campaign ads now showing what she's done with children, which is authentic, her entire life, her entire career. They're playing in North Carolina and other big states. That is showing Hillary Clinton as not just experienced, they've checked that box, but showing her warm, engaging, the grandmother.

But I mean, there's one other thing that this whole mess has created. It has made it difficult— I was told that there was a plan, a possible plan for her to fly in on Tuesday with this first Obama meeting to North Carolina on Air Force One! The full embrace! The Picture!—

TODD: So Hillary Clinton would have been on Air Force One with Obama walking down.

MITCHELL: Coming out— You see the door of the plane opens, there are the two of them arm-in-arm!—

MITCHELL: Well, maybe they’ll still do it. But it make is it really hard for the president while this is pending from his Justice Department.