As of Monday morning, the Media Research Center and its grassroots members made over 25,000 calls to ABC lambasting the network, demanding a full apology for anti-Christian comments made by The View on February 13 that suggested Vice President Mike Pence’s “dangerous” Christian faith was a “mental illness.” 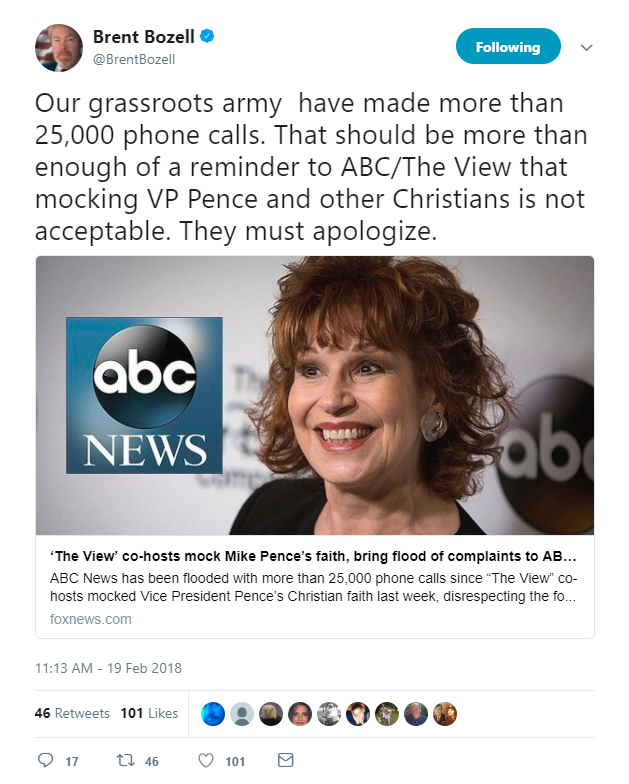 This flood of 25,363 phone calls came following a February 15 open letter by Bozell to ABC that called out the “offensive comments” by co-hosts Joy Behar and Sunny Hostin.

“These characterizations of the Vice President’s faith are insulting not just to him, but to all Christians. Yet as of the writing of this letter, neither Ms. Hostin, nor Ms. Behar, nor ABC have apologized,” Bozell added before noting that this was the latest chapter in a pattern of far-left, anti-Christian behavior by ABC.

Bozell warned that these “slurs against the Vice President’s faith insult millions of Christians and are unacceptable” and if there’s no sufficient apology, the MRC will reactivate its grassroots supporters and have them “contact the advertisers of The View.”

FoxNews.com's Brian Flood noted as such, pointing out late Monday morning that the MRC has done just that, reaching out to “at least five advertisers” on the show.