Brent Bozell’s Open Letter to ABC and The View: Apologize for Bigotry Against Christians

Bozell’s complete February 15 letter is below. A PDF can be found here.

I am writing to bring a serious problem to your attention. Yesterday, I issued a statement on Twitter, addressing offensive comments made by Joy Behar and Sunny Hostin of The View regarding Vice President Mike Pence’s Christian faith. I referred to comments they made after playing a clip from Celebrity Big Brother. Omarosa Manigault-Newman trashed Pence as an “extreme Christian” who has conversations with Jesus. The panel then took turns taking shots at the Vice President’s faith.

Ms. Hostin, who identifies as Catholic, called Pence’s Christianity “dangerous”: “When you have a Mike Pence who now puts this religious veneer on things and who calls people values voters, I think we're in a dangerous situation. Look I'm Catholic. I'm a faithful person, but I don’t know that I want my vice president, um -- speaking in tongues and having Jesus speak to him.”

Ms. Behar mocked the Vice President directly, equating his faith to “mental illness”: “Like I said before, it's one thing to talk to Jesus. It's another thing when Jesus talks to you,” she warned. Hostin agreed: “Exactly. That's different!” Behar responded: “That's called mental illness, if I'm not correct. Hearing voices.”

These characterizations of the Vice President’s faith are insulting not just to him, but to all Christians. Yet as of the writing of this letter, neither Ms. Hostin, nor Ms. Behar, nor ABC have apologized.

Unfortunately, this is not the first time ABC and The View have insulted Christians. This is a disturbing trend. Here are some examples:

And there are many more such examples. Ms. Behar and Ms. Hostin are just the latest.

But now you, Mr. Goldston, have the opportunity to right this wrong. Apologize on behalf of ABC. Require Ms. Hostin and Ms. Behar as individuals to apologize. Bigotry against any group is hateful and ugly. Unfortunately, anti-Christian bigotry seems to be the last acceptable bigotry. A simple unqualified apology will go so far. Our country is so divided right now, why make things worse? By apologizing you have everything to gain and nothing to lose.

Make no mistake, the slurs against the Vice President’s faith insult millions of Christians and are unacceptable. If there are no on-air apologies after this deplorable episode, Christians will tune out ABC programming across the board. And we will do our best to encourage it.

I look forward to your reply. Please do not hesitate to call me by COB Friday if you want to discuss. 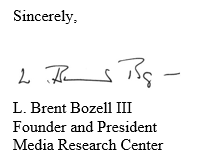