'The View' Blames Christians for Taking Away Free Contraception: ‘How Is It Different From Taliban?’

Thursday on ABC’s The View, the panel had a heated discussion about the Trump Administration’s planned move to repeal the ObamaCare universal mandate that employers provide birth control to their employees under their company’s health insurance plans. This decision was praised by religious and conservative groups, but the women at The View were not having it, comparing the move to Sharia law. 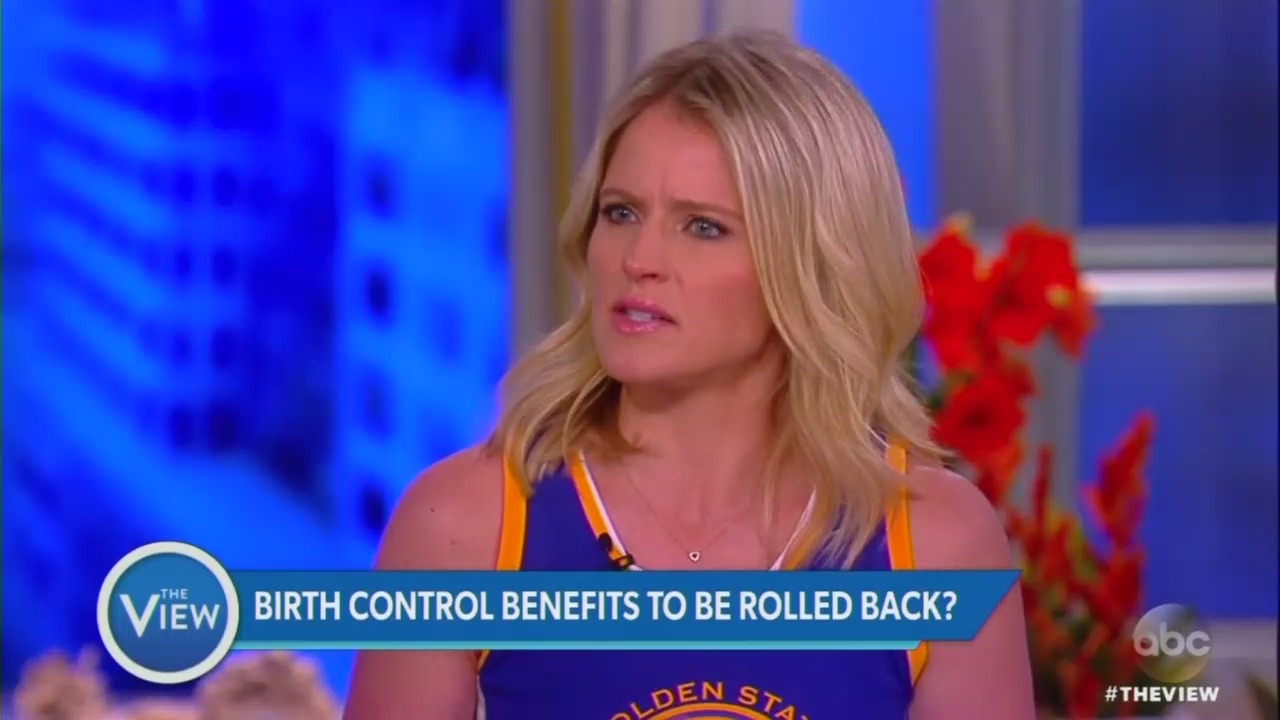 “You can’t hide behind religion to restrict other people’s rights!” host Jedediah Bila slammed. “You’re almost punishing us for having ovaries,” fellow host Sara Haines added. Joy Behar asked, “How is it different from the Taliban?” adding, “Let’s not forget they are trying to keep women in their place, barefoot and pregnant.”

The discussion started with host Whoopi Goldberg asking if repealing the mandate was, “[K]inda imposing your beliefs on your workers?”

Sara Haines first responded by saying that the right was trying to take away women’s options by “punishing” them.

SARA HAINES: It's also a bit of conflict for them to say this. You want to remove funding from places like Planned Parenthood that allows for family planning and decisions... You're not giving them options to make the right decision if you are pulling -- you're almost punishing us for having ovaries.

Haines agreed with Bila, pointing out that many adult women who are married use birth control and use it so they can “do the Biblical thing.”

HAINES: The other thing is that everyone has an image of a teenage girl that needs to go secretly and be on birth control. Many of the people on birth control are women like me in their 30s. That are trying to maintain a marriage and do “that biblical thing” and know what their limits are.

On that point, Hostin argued that free birth control under ObamaCare lowered abortion rates so Christians should be all for it, in theory:

HOSTIN: What was surprising to me was Christians and evangelicals and people of faith is that they are supportive of this rolling back of contraception for women, but what they don't understand is because of this Obama mandate, abortion was lowest for the first time since 1970.

BEHAR: Simple studies show that free birth control lowers abortion rates by a range of 62% to 78%.

HOSTIN: So if you are someone of faith that says you're pro-life, then you should be supportive of people using birth control.

Whoopi and Jedediah Bila then attacked religion, hilariously arguing that people should “take responsibility for their own lives,”.... by forcing their employer to pay for their own birth control.

Joy Behar added to the nuttiness by asking if Christians were the same as the “Taliban.”

WHOOPI: How about this? Do what you need to do for your family. Let me do what I need to do for mine, and we'll all be fine. I don't understand. [applause]

BILA: You can't hide behind religion to restrict other people's rights. That is not okay.

WHOOPI: That's done all the time. We saw it when people said, we can't have gay people adopting.

BEHAR: How is it different from the Taliban I’d like to know.

WHOOPI: I just feel that you have to -- at some point, you have to take responsibility for your life, and a lot of people are saying, this is what I need, and you're saying it doesn't matter what you need. I want you to believe how I believe.

Whoopi then followed up on Behar’s Taliban comment, asking what the difference was between our culture and Islam when it came to women’s rights:

WHOOPI: I said this before. I'm going to say it again. With all these rollbacks and all the things we hear, what's the difference between us and the people we're fighting?

BEHAR: That's what I'm saying. It's to keep women down also. Let's not forget they are trying to keep women in their place. Barefoot and pregnant.

As if that wasn’t enough, the panel came back after the commercial break to continue talking about it, this time with host Sunny Hostin playing the part of the social conservative who argued that she didn’t want her tax dollars going to pay for people’s birth control.

Whoopi became increasingly angry as the discussion went on, repeatedly attacking religious organizations for getting tax breaks. She spewed, “If you are going to operate like everybody else, you don't get the tax breaks. Stay out of [bleep!]”

HOSTIN: The argument you hear from people of faith is, if that's what you want to do, that's fine. I don't want my tax dollars going towards that.

WHOOPI: This is not about your tax dollars. This is about --

HOSTIN: This was a government mandate. This was an Affordable Care Act birth control mandate. So there is government action there.

BEHAR: You're talking about Obama who was a Progressive president, to this guy, who is a total throwback to the '50s.

HOSTIN to Bila: Ok but what’s the percentage of it?

BEHAR to Bila: That’s not an argument!

BILA: I'm sure a lot of them are watching and saying, if there are medical reasons- drugs on the market -- I don't care how many it is.

BEHAR: The majority of women need it for birth control and not to regulate their periods.

After more disagreement, Whoopi argued that paying for other people’s birth control was similar to having to pay taxes that went to war. She then repeatedly stated that religious organizations shouldn’t get tax exemptions if they wanted to get involved in political matters:

WHOOPI: If you want people to be responsible for having children and they are married, this is what they need. Okay? This is what they need. I don't want to pay for the 12- 15-year war we have been in, but there are things I have to do as an American. What I would like is everybody to pay their fair share. That would make me happy. [ Applause ]

But as a religious group, if you are going to talk politics as a religious group, you don't get a tax break. Sorry. Because the whole point was that you go to church to talk to God. You do your thing. You're not there to hear the priest's opinion or minister's opinion of who is the right person, that’s not why you go to church. And if that is the reason you're going, all you megachurch, give up your money. Give it up. Because you can't -- you can't -- you can't have it both ways. People either have to be responsible and in charge and you have to say, listen. I understand you're a Catholic woman, but you don’t want to have 50 kids you don't want to do that.

Hostin again tried to represent the conservative view against the rest of the panel, arguing that a Catholic school would be seen as condoning birth control if they let their employees have it in their healthcare plans. Whoopi and Bila couldn’t concede that point, and it ended with Whoopi attacking Hostin in an enraged rant painting Christians as bigots:

HOSTIN: Let’s say you work at a Catholic school. And the Catholic school, the Diocese provides birth control, certainly the message is that it’s condoned.

WHOOPI: They provide health care, where you decide what you need.