In just over the last 24 hours, the Media Research Center fetched two mentions on both CNN and the Fox News Channel (FNC) with the latter network devoting a segment to a study by MRC Culture’s Katie Yoder comparing network coverage of the Cincinnati gorilla shooting versus the latest violence in Chicago.

FNC’s The Five spent an entire, four-minute-and-37-second block during Wednesday’s show on Yoder’s study that found that the networks spent 54 times more coverage on the deadly gorilla shooting in Cincinnati compared to what transpired in Chicago over Memorial Day weekend.

Co-host Juan Williams provided some statistics on the horrible weekend in the Windy City before name-dropping NewsBusters:

It was another deadly and violent weekend in Chicago but it got scarce media coverage unlike the gorilla that was shot at Cincinnati zoo over the weekend. Now, Greg prophetic as ever, pointed out last night that sometimes, it’s easier for people to protest an animal's killing than a human killing. Six people were killed in Chicago over the holiday weekend, at least 63 others shot. NewsBusters did a tally. ABC, CBS, and NBC had 54 times more coverage of the death of the gorilla they did than on Chicago's crime crisis.

Turning to fellow co-host Greg Gutfeld, Williams demanded that “[s]omething has to be done” to stop the violence in Chicago but hasn’t been helped by the fact that far more “media attention can be shown on this issue.”

Commenting on the study’s findings, Gutfeld summed up the reason as the gorilla story being “politically non-threatening” and “a coward’s concern” because “[i]f you go after gang violence, you run the risk of being called a racist because you are focusing on....black on black crime.”

He added by citing Democratic Mayor Rahm Emanuel’s strategy of attacking Chick-fil-A because “[t]hat's an edgy injustice as opposed to gang violence which requires you to come out and say there are people are killing people here and it's wrong and it's kinda boring.”

A few hours later on The O’Reilly Factor, host Bill O’Reilly didn’t mention the MRC or NewsBusters directly, but referred to Yoder’s study both in a tease and at the onset of a segment on the violence in Chicago.

“The little boy gorilla incident at the Cincinnati Zoo received 50 times more coverage than the slaughter that happened in Chicago over the Memorial Day weekend. Tonight, we will take a hard look at that,” stated O’Reilly in a tease.

Impact segment tonight. There is no question that a three-year-old boy falling into a gorilla cage leading to the animal being shot to death is a major story. But is it more important than 69 people being shot in Chicago over the same period of time? Apparently so as the network news gave the gorilla story 54 times more play than the Chicago story.

When host Brooke Baldwin asked McEnany if Trump could handle “being under the microscope,” the Trump supporter invoked the MRC:

It is not that at all, because if you go on Media Research Center, you’ll find a minute-by-minute accounting of the media's time, the television press and a story-by-story accounting of how much attention has been devoted to Clinton vs. Trump. The scrutiny absolutely has been on Trump, with the few exceptions you mentioned that have been relegated to Hillary Clinton and The Washington Post has been reported to have 20 investigative reporters on Donald Trump[.]

For the latest on such studies that examine the minute-by-minute breakdown of Trump and Clinton coverage, be sure to check out the work of MRC research director Rich Noyes and research analyst Mike Ciandella.

The transcript of the segment from FNC’s The Five on June 1 can be found below. 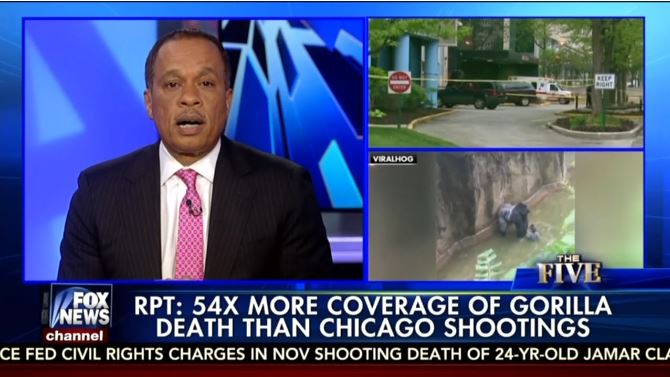 JUAN WILLIAMS: It was another deadly and violent weekend in Chicago but it got scarce media coverage unlike the gorilla that was shot at Cincinnati zoo over the weekend. Now, Greg prophetic as ever, pointed out last night that sometimes, it’s easier for people to protest an animal's killing than a human killing. Six people were killed in Chicago over the holiday weekend, at least 63 others shot. NewsBusters did a tally. ABC, CBS, and NBC had 54 times more coverage of the death of the gorilla they did than on Chicago's crime crisis. Now, Greg, this is something that just irritates the bejesus out of me because I think we have an ongoing crisis and mostly of black people killing black people contrary to what Mr. Trump thinks and I don't see that we in the media say you know what, this is intolerable. Something has to be done. I don't know what has to be done but in terms of media, media attention can be shown on this issue.

WILLIAMS: I don’t know. I think you’re wrong. You mean, you are a racist.

GUTFELD: It happens. No, I’m saying there are people that will call you racist.

GUTFELD: Yeah, but I'm saying as white person, that — 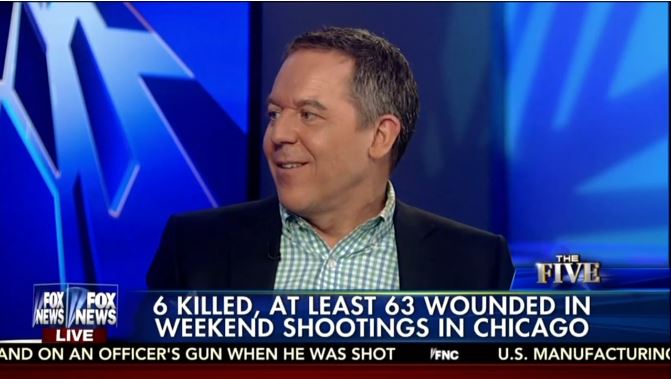 GUTFELD: You remember what the mayor of Chicago did while there were shootings and homicides? He went after Chick-fil-A because Chick-fil-A is an edgy injustice. Oh, you know, the owner is against gay marriage. That's an edgy injustice as opposed to gang violence which requires you to come out and say there are people are killing people here and it's wrong and it's kinda boring. It's not edgy enough.

WILLIAMS: You know, Dana, I'm not going to say it was wrong to cover the death of the gorilla. I think it was very interesting. I know my family was certainly preoccupied about it. The kids. Everybody is talking about it. Allen West just wrote a little memo he sent out. He said, you know what? People talked about Cecil the Lion — you remember when Cecil the Lion was killed? So, that's interesting, but it seems we have an ongoing crisis in inner cities, particularly in black America right now, and I don't see that the passion is in the media for that story.

DANA PERINO: Well, I was thinking earlier about one of the first things you learn in journalism school it's not news if it happens all the time. So, one of the sayings is, you don't cover a plane, all the planes that landed safely at La Guardia today but if there were unfortunately to be an accident or a crash, then you would cover that because it would be news and I wonder if the media is so desensitized to the normalcy of a killing spree on a Memorial Day weekend in Chicago that it doesn't register as news as the gorilla story did.

ERIC BOLLING: I’m going to defend the networks on this one. Look, as Dana points out, 69 shot in Chicago on a three-day week isn't new. I mean, this has been going on for a while, so reporting on that again. We've heard that before. She should — they should do that. I agree with that. A 450 pound gorilla with a four-year-old child with a video as a amazing as it is and a controversial over whether he should be shot on tranquilized. That doesn't come along. You point out Cecil the Lion and maybe others. That's an interesting story and it's a user friendly story and people are going to — look, they are in the business to getting eyeballs to the shows. That gets eyeballs. We led with it.

WILLIAMS: Oh no, I don’t doubt that. No, no, I appreciate it.

KIMBERLY GUILFOYLE: Television is a visual medium, right? And everything is talking about it, so you are saying okay, that's where the news is. 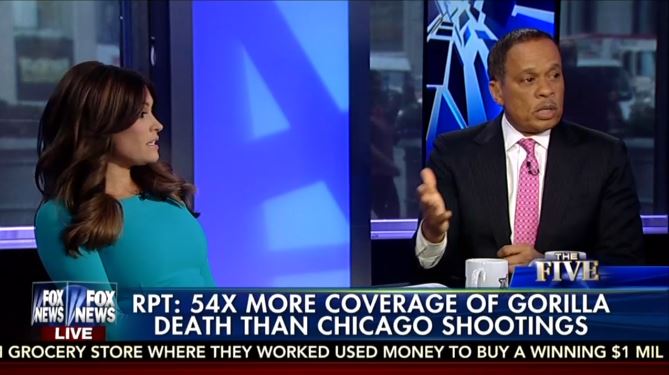 WILLIAMS: No, what I was going to say to you is I see even from some conservatives, they say look abortions are going on, refugees are dying in large numbers, and Americans have trouble dealing with those difficult issues. Instead, we go and talk about Cecil the Lion or the gorilla.

GUILFOYLE: We should be talking about those difficult issues and in fact, we have on this show. You know, we went down there and I covered — you know, Philadelphia, I went down and covered the Dr. Gossnell trial and that through the most horrifying testimony, even as a prosecutor, prosecuting child abuse cases that I’ve ever seen or heard in my life. Okay? I wouldn’t wish on anyone to see what goes on there, but you have to tell the story too. It's incumbent upon us. Eric is right. Television is a visual medium. There was great video. It was a child. It was this endangered species. It was really kind of the perfect medium for television to be able to put that forward and say that this is a story that's resonating. Where are people Black Lives Matter up in arms about the deaths of African-Americans in Chicago. Why is Rahm Emanuel holding a press conferences? Where are are they?

GUILFOYLE: That they should.