On the December 5th airing of Saturday Night Live, fake-news anchor Michael Che called out the Republican Senate for scheduling action to defund Planned Parenthood, despite the recent shooting in San Bernardino.

MICHAEL CHE: The New York Times ran a front page editorial, urging Congress to take action, following Wednesday’sshooting in California. But Congress already took action, because on Thursday the Senate confronted the gun issue head on by voting to, Defund Planned Parenthood, good job dudes. There have been more mass shootings in the US this year than there have been days in the year. So how is defunding Planned Parenthood the priority right now? It would be like, if you called an exterminator and he goes, whoa, you have a lot of rats in here, man. The first thing we got to do is defund Planned Parenthood. 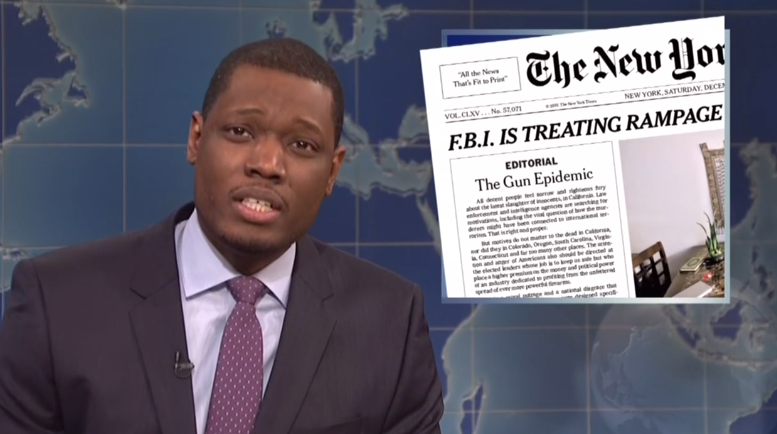 The reality of the Senate activity however is that the bill, known as the Restoring Americans’ Healthcare Freedom Reconciliation Act, was scheduled for Thursday, December 4, back on November 18. But Saturday Night Live is not one to let those troublesome facts deprive the liberal narrative they want to push. Like the argument that “there have been more mass shootings in the US this year than there have been days in the year.” NewsBusters has already shown that even Politifact and a Mother Jones editor disagree with the statistic.

Finally, how are NBC's comedy writers so dim that that would include exterminators in a Planned Parenthood gag? Women are calling for an exterminator when they walk into Planned Parenthood for an abortion. This isn't the first time Che has made an uncomfortable joke. Previously, he joked about the Republican primary being about which "candidate would make the best time traveling baby murderer?"