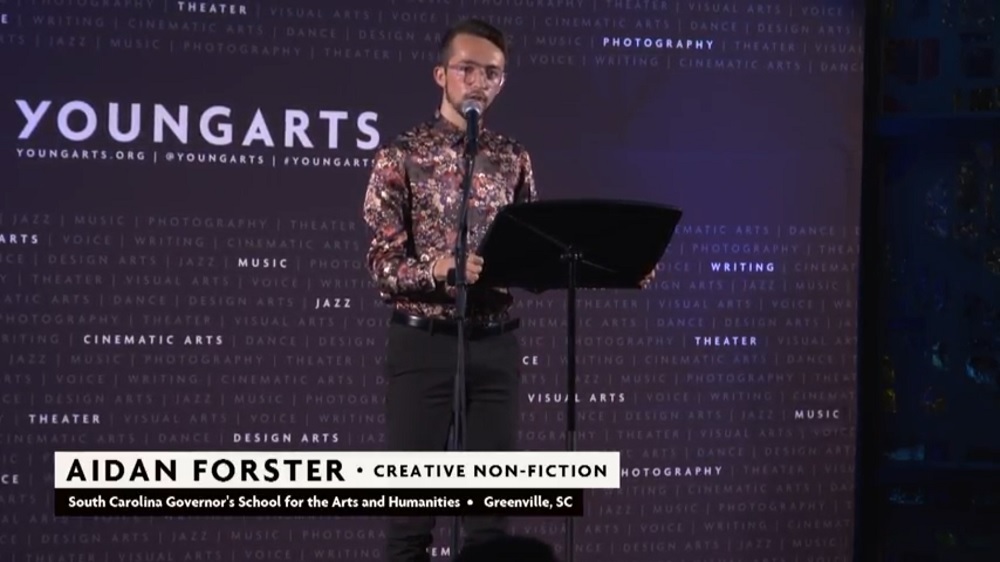 A Friday article from NPR drew attention to three teenaged artists, whose politically-charged work were recently featured at the headquarters of the U.S. Department of Education. L.A. Johnson detailed how a non-profit organization chose the creative activists as part of an exhibit that "gathered the work of student artists" on the subjects of "empathy, tolerance and acceptance." Johnson interviewed the three artists on their "queer" poetry, "androgynous" painting, and portraits memorializing victims of police violence.

The journalist led her online report by emphasizing that "more and more, educators are focusing on the importance of schools' paying attention to stuff other than academics." She noted that the Education Department exhibit, "Total Tolerance," zeroed in on "themes of racism, sexism and diversity."  After a summary of the federal department's collaboration with National YoungArts Foundation, she introduced her three subjects — Ameya Okamoto, Juniel Solis, and Aidan Forster, all of whom are between the ages of 16 and 18.

The artistic trio have clearly infused political activism into their work. A May 2018 article about Okamoto pointed out that "her protest art is informed by her chosen family, while also checking her privilege as an Asian American woman." She also "has been involved with Portland's Black Lives Matter organization for a few years."

Solis' online portfolio disclosed that the artist "focuses on the issues of sexuality and relationships." Forster stated in an April 2018 press release from the National YoungArts Foundation that "a writer and artist, I aspire...to help other queer youth use language to create an individuated space in which their bodies can rest, one beyond the scope of trauma and the tragic."

Johnson first asked the artists to give brief introductions of their pieces at the exhibit. Forster revealed that his "poetic" creative writing composition, "Instructions for Suburban Boy Love," was "inspired by the particular brand of queer isolation and loneliness endemic to suburban life in the South." He added, "I think for me, queerness is very much like an aperture for language — a mode of filtration for experience."

Okamoto detailed, in part, that her portraits were "about [the] celebration of the lives that have been lost to police violence, but also about overturning negative imagery." Solis described his contribution as "a painting of two young adults with makeup and they have a very androgynous feel. They're wearing orange flowers on their dresses. They're men and they're wearing makeup."

The NPR correspondent later asked her subjects, "What has art done for you?" Forster replied that "growing up in a very conservative state, in a conservative region, I really struggled with internalized shame around sexuality....I just realized that poetry presented itself as an antidote to that shame I felt, and allowed me to dismantle it and externalize it."

Okamoto answered that art helps her "do grassroots organizing...be a part of changing the narrative for people who can vote for people who can make policy change, because at the end of the day it's all in themselves." She also expressed her hope that the exhibition of her works at the Department of Education "changes the negative stereotype of the [Black Lives Matter] movement."

Johnson included a slideshow of pieces from the "Total Tolerance" exhibit by other young artists. A portrait by Janelle Radcliffe  — titled "America's Target" — spotlighted a fully-veiled Muslim woman being handcuffed by a pair of white hands. Caroline Zhang's painting, "Audiences," featured topless female figures. Quinlan Lewis-Mussa's photograph of bananas declared, "Exotic Is For Fruit Not People."