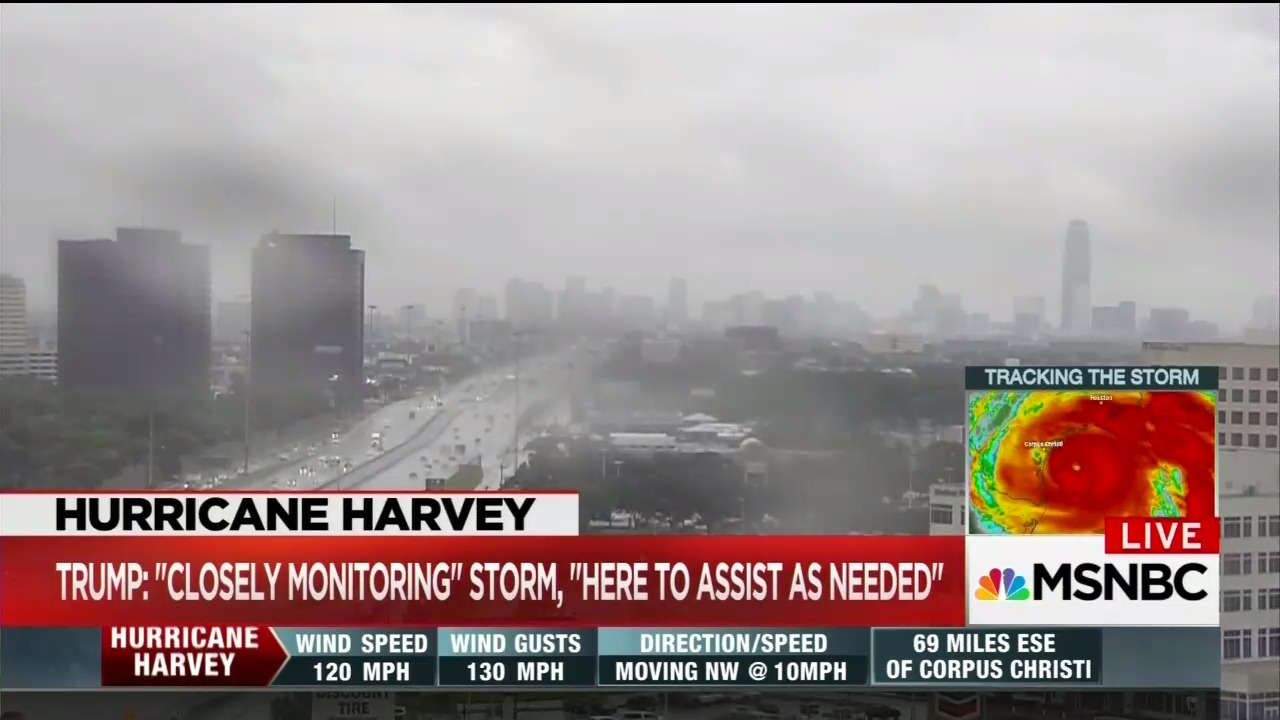 Seth Borenstein touted in a Tuesday report for the Associated Press that some scientists believe that Hurricane Harvey is a "soggy, record-breaking glimpse of the wet and wild future that global warming could bring." Even after acknowledging that these climate researchers are "quick to say that climate change didn't cause Harvey and...haven't determined yet whether the storm was made worse by global warming," Borenstein underlined that they believe that "warmer air and water mean wetter and possibly more intense hurricanes in the future."

The correspondent led his item by spotlighting that "by the time the rain stops, Harvey will have dumped about 1 million gallons of water for every man, woman and child in southeastern Texas." He quickly followed with his "soggy...glimpse of the wet and and wild future" line, along with the scientists' prediction of "more intense hurricane in the future." The first expert he cited was Princeton University Professor Michael Oppenheimer, who underlined that "this is the kind of thing we are going to get more of." He added, "This storm should serve as warning."

It should be pointed out Oppenheimer, a critic of "climate deniers," had wildly claimed in 1990 that global warming would cause "food riots" by 1995. Borenstein didn't mention his past record, and would go on to note the Princeton academic's involvement in dispute in the climate science community.

The AP journalist continued by featuring three other climatologists, who emphasized the rapid strenghening of Hurricane Harvey before its landfall in Texas, along with a wider apparent impact of climate change.

When Harvey moved toward Texas, water in the Gulf of Mexico was nearly 2 degrees (1 degree Celsius) warmer than normal, said Weather Underground meteorology director Jeff Masters. Hurricanes need at least 79 degrees F (26 C) as fuel, and water at least that warm ran more than 300 feet (100 meters) deep in the Gulf, according to University of Miami hurricane researcher Brian McNoldy.

Several studies show that the top 1 percent of the strongest downpours are already happening much more frequently. Also, calculations done Monday by MIT meteorology professor Kerry Emanuel show that the drenching received by Rockport, Texas, used to be maybe a once-in-1,800-years event for that city, but with warmer air holding more water and changes in storm steering currents since 2010, it is now a once-every-300-years event.

Thirteen paragraphs into his report, Borenstein finally quoted from a scientist who theorized that natural variations in the climate had more to do with Harvey's massive flooding effect than global warming:

"You really can’t pin global warming on something this extreme. It has to be natural variability," Mass said. "It may juice it up slightly but not create this phenomenal anomaly."

The correspondent also didn't mention that Harvey is the first category-four hurricane to strike the east coast of the United States since 2004. The hurricane's landfall also ended a "4324-day span between U.S. major hurricane landfalls." Before Harvey, the last hurricane to make landfall in the U.S. was Wilma in 2005. Apparently, climate change isn't causing the more frequent and more powerful tropical systems that major media outlets have predicted since Hurricane Katrina struck in 2005.