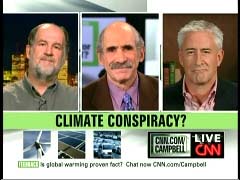 Black included four sound bites from Monckton in his report, and two from manmade climate change believers- Rajendra Pachauri from the IPCC and Alex Steffen of the website WorldChanging.com:

MONCKTON: Most of the politicians don’t know any science-

BLACK: Lord Christopher Monckton is one of them. He’s a member of the British aristocracy and a passionate skeptic on climate change.

BLACK (on-camera): So you believe all of this is a colossal waste of time and money?

MONCKTON: There’s no need for it.

BLACK: There are a lot of people here who disagree with you.

MONCKTON: Yes, but they haven’t studied the science, most of them-

BLACK (voice-over): Monckton says the planet is not getting hotter, its recent changes are natural, and there’s science to prove it. He’s among the skeptics who have been emboldened by the so-called ‘ClimateGate’ scandal. Monckton says e-mails hacked and leaked from an English university show climate scientists are fiddling with their figures and misleading the world.

MONCKTON: Those scientists have been fabricating, inventing, tampering with, altering, hiding, concealing and destroying data.

BLACK: The scientists who wrote the e-mails deny the allegations, but they have developed so much momentum they were addressed directly during the opening ceremony of the conference. Dr. Rajendra Pachauri, who leads the Intergovernmental Panel on Climate Change, defended his organization against what he suspects is a direct attack.

DR. RAJENDRA PACHAURI, IPCC: The recent incident of stealing the e-mails of scientists at the University of East Anglia shows that some would go to the extent of carrying out illegal acts, perhaps in an attempt to discredit the IPCC. But the panel has a record of transparent and objective assessment stretching over 21 years, performed by tens of thousands of dedicated scientists from all corners of the globe.

BLACK: At this conference, Dr. Pachauri enjoys a clear majority of support among activists, analysts, delegates- well, pretty much everyone.

ALEX STEFFEN, EXECUTIVE EDITOR, WORLDCHANGIN.COM: It really has reached a point where climate skepticism has been pretty comprehensively debunked as a theory. 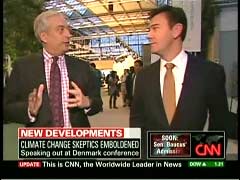 BLACK (on-camera): So what is your message to many thousands of people who have come here from around the world that surround us now?

MONCKTON: Go home, enjoy some quality time with your families- stop worrying about the climate.

Two hours later, Campbell Brown moderated two separate panel discussion segments with two climate change skeptics- Stephen McIntyre of the Climate Audit blog and Chris Horner, author of the book ‘Red Hot Lies: How Global Warming Alarmists Use Threats, Fraud, and Deception to Keep You Misinformed;’ as well as Professor Michael Oppenheimer of Princeton University, a proponent of the theory of manmade climate change. Anchor John Roberts also participated in the first segment, which was part of special coverage on Brown’s program titled “Global Warming: Trick or Truth?” Other than the first segment at the beginning of the hour, this special coverage took up the 8 pm Eastern hour. A transcript of excerpts from the first segment:

BROWN: Stephen, let me start with you here. You’re personally attacked in some of these e-mails. You’re called everything from a ‘bozo’ to a ‘moron’ to ‘the Joe McCarthy of climate change.’ How do you characterize what’s going on with the e-mails? Do you think this is an attempt to shut down criticism?

MCINTYRE: Sure they are. In discussion of the ‘trick,’ let’s be quite frank about it: it was a trick. The tree ring records went down in the late part of the 20th century. Instead of disclosing that in the 2001 IPCC report, they didn’t show the decline. In another document, the 1999 World Meteorological Report- that is the subject of the e-mail in question- they simply substituted temperature information for the tree ring information to show the record going up when it went down. There’s nothing mathematically sophisticated about that.

BROWN: Let me go to Michael here. Michael- Professor, you were a recipient of some of the hacked e-mails in question. To a layperson, I mean- Stephen just gave us two examples there. To somebody like me who is not a scientist, it does look like these scientists cherry-picked certain bits of information to make the case.

OPPENHEIMER: There was no deception here. I mean, let’s step back. From a scientific point of view, before this episode occurred, we knew the earth was warming, sea level was rising, glaciers are melting, the sea ice is retreating, the ocean is becoming more acidic, all due to the build-up of the greenhouse gases. Nothing in this episode changes any of that. Even if you think that the British group was somehow cheating, which I don’t believe it was, you could throw them out, and there are three other groups, the Japanese group and two American groups, who’ve done analysis on the temperature data and reached the conclusion that Earth is warming and the warming is unique in climate history. So there’s nothing here that changes the picture....

BROWN: One of the critics you just mentioned is Chris Horner, and Chris, I know you’re not a scientist. You’re an attorney. You’re a longtime critic of this- a skeptic, and you have long argued that scientists are cooking the data. But, I mean, what’s the motive for that?...

HORNER: Well, I don’t argue that they’re cooking the data. I named these guys names and I described what they were doing, relying in great part on Stephen McIntyre’s terrific work, among others, in ‘Red Hot Lies.’ It’s out there, and now we know, in their own words, what they were doing. And why is- well, you know, we’d have to perform brain surgery on these people, but the fact is scientists are people too, and they’re subject to every human motivation, including tremendous amounts and increasing amounts of taxpayer funding, which increases with the alarm, as well as ideology, in the President’s chief science adviser’s case, an anti-population bent, and so on....

BROWN: But it’s beyond this group. I mean, you’re talking about other people who found very similar results.

HORNER: Let’s talk about the falsified results. That’s ‘ClimateGate.’ ‘It’s the fraud, stupid,’ to oversimplify it, and that’s what we’re talking about. We don’t have to keep changing the subject. It’s not about locker room talk between scientists. It’s the fraud. Stephen proved it. These people have admitted it.

BROWN: But Stephen, let me just go back to you, because I know you are a skeptic and you have raised questions. But you’re- and tell me if my read is not accurate- your criticism is a little more nuanced than that. I didn’t read you as saying fraud, but you tell me.

MCINTYRE: Yeah. You’re right, my criticism is a lot more nuanced than that. There’s no question that it’s warmer now than it was in the 19th century. The battleground issue is whether it’s warmer now than in the 11th century, and whether the data that we have enables you to say that with any degree of certainty. One of the e-mails in the ‘ClimateGate’ letters is from Keith Briffa [of the Climate Research Unit], who says it was his opinion that it was as warm a thousand years ago as it is today. That’s something he doesn’t say in the IPCC reports, and it’s disquieting to read that in this correspondence....

BROWN [to Oppenheimer]: And let me get a bottom line sort of account from you, in your view.

Later in the program, Brown featured another segment from Roberts with excerpts from his interview of Peter Liss, the interim director of the Climate Research Unit at the University of East Anglia (other excerpts from the interview were played earlier in the day during American Morning’s slanted coverage of ClimateGate). Roberts also toured the CRU’s facilities with Liss. The CNN anchor is the only major TV news anchor based in the U.S. to travel to the university to report on the ClimateGate scandal.
Environment Europe Global Warming Liberals & Democrats Conservatives & Republicans Regulation IPCC Pollution Denmark ClimateGate CNN The Situation Room No Bias, No Bull Christopher Monckton Stephen McIntyre Phil Black Michael Oppenheimer Chris Horner Rajendra Pachauri Alex Steffen