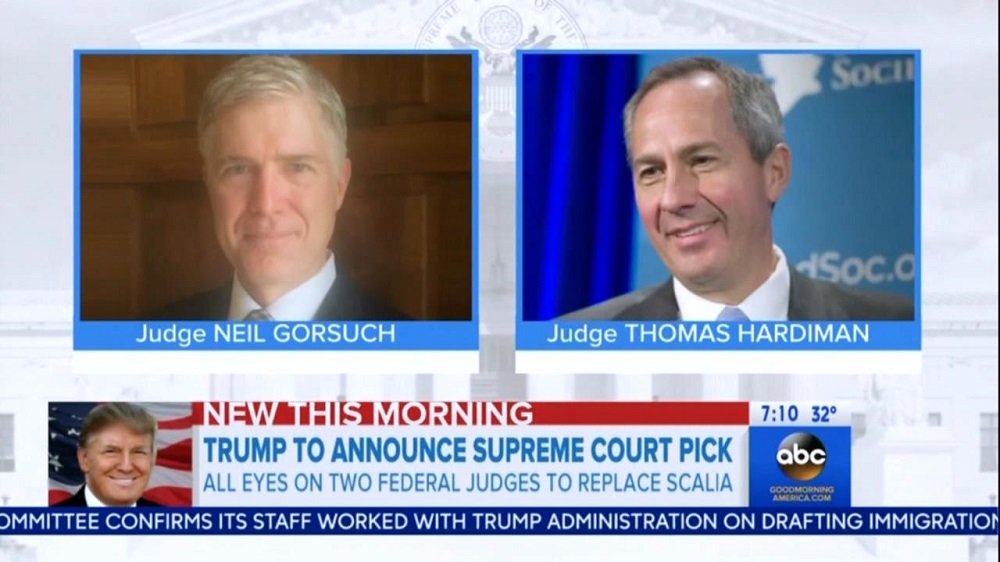 The Big Three networks' morning newscasts on Tuesday forwarded the same language about two of President Trump's possible Supreme Court picks. On CBS This Morning, Jan Crawford labeled Neil Gorsuch and Thomas Hardiman "solid conservatives." ABC's George Stephanopoulos used the same term on GMA, and played up that "either one of these finalists could be picked by any Republican president — both relatively young white men...solid conservatives." NBC's Peter Alexander also zeroed on in the race of the potential nominees on Today: "The President's decision narrowed down to two appeals court judges, both white men" [video below].

CBS's Crawford led into her report by noting that "sources say President Trump's choice is down to two judges whose backgrounds could not be any more different." She continued with her "solid conservatives" phrase about Gorsuch and Hardiman, and underlined that the former "has a judicial philosophy modeled after [Scalia]." The correspondent reused her "solid conservative" label about Gorsuch later in the segment, and highlighted that he "sided with religious employers opposed to the ObamaCare contraceptive mandate."

On Good Morning America, ABC's Jonathan Karl echoed Crawford's reporting about Gorsuch: "Gorsuch, 49, serves on the 10th Circuit Court of Appeals; and has been called 'Scalia 2.0,' because he echoes Scalia's judicial philosophy and his writing style." Moments later, Stephanopoulos gave his "relatively young white men" label of the two possible nominees. Correspondent Terry Moran replied, "Absolutely, George," and added that "any of the candidates that President Trump has considered would not tip the balance of this court, because they're replacing Justice Scalia — replacing a conservative with a conservative."

Alexander mentioned the possible Court picks towards the end of his report on NBC's Today about President Trump firing the acting attorney general. He detailed that "the President's decision narrowed down to two appeals court judges — both white men, both appointed by President George W. Bush — Neil Gorsuch, a Harvard law grad from Colorado; and Thomas Hardiman, a former trial judge from Pennsylvania, where President Trump's sister also sits on the bench."

The transcript of Jan Crawford's report on CBS This Morning and Jonathan Karl's report from ABC's Good Morning America — both of which aired on January 31, 2017:

GAYLE KING: President Trump plans to announce his nominee for the Supreme Court tonight in a prime-time address from the White House. Sources tell CBS News the President is now deciding between two federal appeals court judges. They are Neil Gorsuch — he's from Colorado — and Thomas Hardiman of Pennsylvania.

Jan Crawford is at the Supreme Court. She was first to identify those judges on the President's short list. Jan, good morning.

JAN CRAWFORD: Well, good morning. Sources say President Trump's choice is down to two judges whose backgrounds could not be any more different. But they have one thing in common: both are considered solid conservatives.

PRESIDENT DONALD TRUMP: I think you will be very impressed with this person.

CRAWFORD (voice-over): With President Trump just hours away from announcing his Supreme Court nominee, one front-runner is straight out of central casting. With degrees from Harvard and Oxford, and establishment credentials, Judge Neil Gorsuch has a judicial philosophy modeled after the justice he would replace.

JUDGE NEIL GORSUCH (from September 3, 2016 event broadcast on C-SPAN): People talk about members of their profession as 'lions' of the profession. And I often have a difficult time understanding the analogy — not so with Justice [Antonin] Scalia.

CRAWFORD: A solid conservative, Gorsuch sided with religious employers opposed to the ObamaCare contraceptive mandate; and in his book against assisted suicide, he argues for the sanctity of life.

CRAWFORD: Also on Mr. Trump's short list: Judge Thomas Hardiman of Pennsylvania — his nomination in the fall of 2006 to the federal appeals court was so uncontroversial, just one senator attended the hearing.

JUDGE THOMAS HARDIMAN (from congressional hearing): Our role as judges is to interpret the law.

CRAWFORD: Hardiman is considered a law and order judge, and favors gun rights. And if Gorsuch is blue blood, Hardiman is blue collar. He's the first member of his family to graduate from college — Notre Dame with honors — and he put himself through Georgetown Law driving a taxi. He would be the only justice from outside the Ivy League, as he discussed at a law school forum with Justice Clarence Thomas.

CLARENCE THOMAS, SUPREME COURT JUSTICE (from April 9, 2013 event broadcast on C-SPAN 2): I think we should have people from other law schools. It's all Harvard and Yale.

CRAWFORD (on-camera): Now, Mr. Trump said yesterday he's already made up his mind. But whichever judge he's chosen, Democrats are ready for a fight. They are vowing to block this nominee — just like Republicans blocked President Obama's nominee of Merrick Garland. Charlie?

ROBIN ROBERTS: Now that the President has picked for the Supreme Court, he will reveal the nominee tonight — a prime-time presentation from the White House — and Jon Karl is there — has the latest for us. Good morning, Jon.

JONATHAN KARL: Good morning, Robin. President Trump says the decision is made. He has picked his nominee for Supreme Court — a decision that may prove to be more consequential and have a longer-lasting impact than anything he has done so far.

KARL (voice-over): He may have already made his decision, but President Trump says he's going to wait until prime time tonight to make the announcement.

TRUMP (from White House event): I have made a very big decision on the United States Supreme Court that is going to be announced tomorrow night from the White House at eight o'clock.

KARL: Trump's choice would fill the vacancy created by the death last year of Antonin Scalia.

TRUMP (from October 2016 presidential debate): The justices that I'm going to appoint will be pro-life. They will have a conservative bent. They will be protecting the Second Amendment.

KARL: Trump's short list down to two: Judges Neil Gorsuch and Thomas Hardiman. Hardiman, 51, serves on the 3rd Circuit Court of appeals with President Trump's sister, Marion Trump Barry — who sources tell ABC News highly recommended him to her brother. Gorsuch, 49, serves on the 10th Circuit Court of Appeals; and has been called 'Scalia 2.0,' because he echoes Scalia's judicial philosophy and his writing style.

TRUMP (from an interview on CBN's "The Brody File"): I think that the person that I pick will be a big, big — I think people are going to love it. I think evangelicals, Christians will love my pick.

KARL (on-camera): Regardless of who is picked, Democrats and Republicans are gearing up for a confirmation battle in the Senate that will look like an all-out political war. Of course, Democrats are still very much upset that President Obama's pick for this seat never even got a hearing. George?