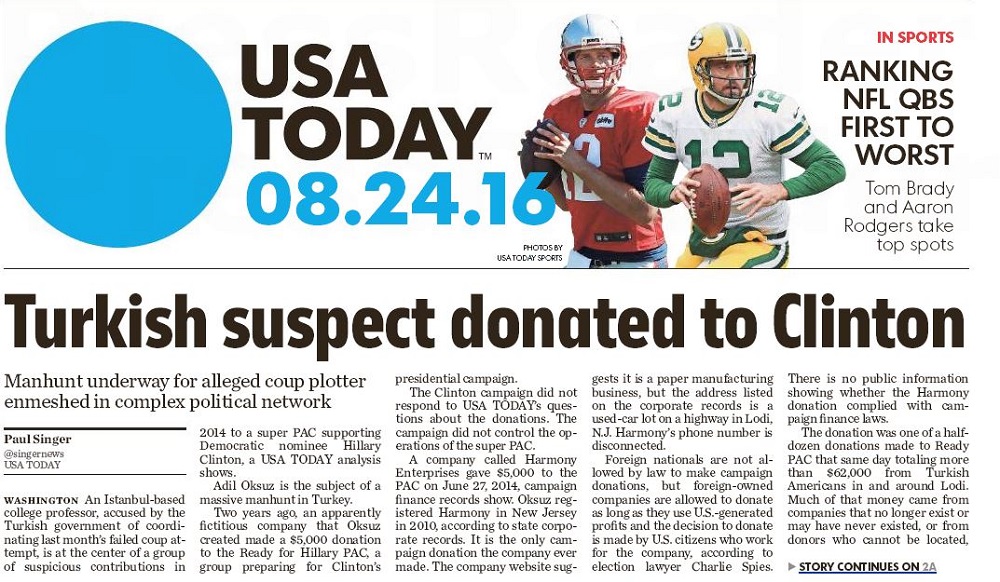 ABC, CBS, and NBC's morning and evening newscasts on Wednesday all punted on mentioning USA Today's above-the-fold scoop about how an "Istanbul-based college professor...accused by the Turkish government of coordinating last month's failed coup attempt, is at the center of a group of suspicious 2014 contributions to a super PAC supporting...Hillary Clinton." CBS and ABC's morning shows covered Vice President Biden's visit to Turkey, as well as the country's recent offensive against ISIS, but omitted mentioning this development. NBC didn't cover Turkey at all, but Today aired a segment on the decline in the use of bar soap.

Univision and Telemundo's Wednesday evening newscasts also ignored the newspaper's reporting on the Clinton super PAC donor. On Fox News Channel, Heather Nauert stood out for mentioning the manhunt for the Turkish college professor during a 41-second news brief on Wednesday's Fox and Friends [video below]:

HEATHER NAUERT: One other Fox News alert right now: Vice President Joe Biden landing just a few hours ago in Turkey. Turkey, of course, has suffered so many terror attacks in the recent weeks. He's hoping to smooth over relations, following that failed military coup there that nearly took out Turkey's government — some have been accused of being lenient on terror groups, such as ISIS. And we're now just learning there was a massive manhunt underway in Turkey for a professor in Istanbul who they say is responsible for that coup; and is also a Hillary Clinton donor. In the meantime, about a dozen Turkish tanks crossing into northern Syria this morning to take on ISIS forces following several deadly attacks in Syria.

USA Today correspondent Paul Singer first pointed out in his report that Adil Oksuz is at "the center of a group of suspicious 2014 contributions to a super PAC supporting Democratic nominee Hillary Clinton, a USA TODAY analysis shows." Singer continued that "Oksuz is the subject of a massive manhunt in Turkey. Two years ago, an apparently fictitious company that Oksuz created made a $5,000 donation to the Ready for Hillary PAC, a group preparing for Clinton's presidential campaign."

The journalist later detailed connections between Oksuz and other Clinton donors in the U.S. He zeroed in on how "Recep Ozkan...donated $20,000 to Ready PAC. He served as a national finance co-chairman for the PAC. He has also given nearly $5,000 to Hillary Clinton's presidential campaign, and earlier this year he gave between $500,000 and $1 million to the Clinton Global Initiative....Gokhan Ozkok...a finance co-chairman of Ready PAC...has given $8,000 to Clinton's campaigns over the years. He is also a donor to the Clinton Global Initiative." The two also "corresponded with Clinton aide Huma Abedin via Clinton's personal email server, according to new emails released by the State Department to the watchdog group Judicial Watch."

Correspondent Holly Williams gave a minute and 29-second report on the Vice President and the anti-ISIS offensive on CBS This Morning. Williams also omitted the revelation about Oksuz:

ANTHONY MASON: The U.S. is providing air support for an attack on ISIS forces along the Syria/Turkey border. U.S. airplanes are helping Turkish units on the ground. This is new video of an air strike. Their target is the ISIS-held town of Jarablus, Syria.

HOLLY WILLIAMS: Good morning. Turkish war planes and artillery are both hitting ISIS positions in Jarablus; and Turkish special forces have also entered Syria, according to reports this morning. Turkish tanks have been seen rolling across the border, and Syrian rebel forces have told us around 1,500 of their fighters have also crossed into Jarablus. The town is key because it lies on the only section of Turkey's 500-mile-long border with Syria that's still controlled by ISIS. Thousands of foreign fighters have used the Turkey/Syria border to cross into the war zone.

This comes on the same day that vice president Joe Biden is here in Turkey, trying to shore up relations with one of America's most difficult allies. The two NATO members have a fundamental disagreement about how to tackle ISIS. The U.S. is working closely with Kurdish fighters who are battling ISIS. But Turkey says that the Kurdish group is a terrorist organization; and has recently been shelling their positions at the same time that it's hitting ISIS. Norah?

NORAH O'DONNELL: All right. Holly Williams in Turkey, thank you so much.