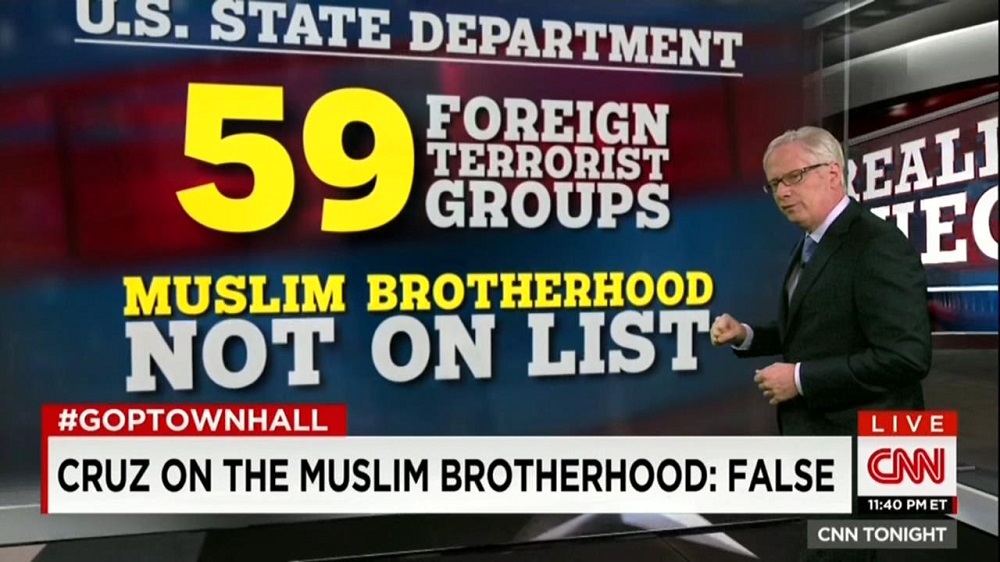 On Tuesday's CNN Tonight, Tom Foreman failed to tell the whole story about the Muslim Brotherhood as he targeted Senator Ted Cruz for a statement that he made about the Islamist group. Foreman noted that Cruz attacked the Brotherhood as a "terrorist organization," and cited how "the U.S. State Department has an official list of 59 foreign terrorist groups...and the Muslim Brotherhood is not on that list....His statement is false." However, he left out the organization's past history of violence, as well as the U.K.'s December 2015 condemnation of the Brotherhood. [video below]

Host Don Lemon turned to Foreman to do a "reality check" on selected lines from the Republican presidential town hall earlier in the evening. The CNN journalist first zeroed in on how the Texas senator contended that "Barack Obama and Hillary Clinton have promoted bad policies in the Middle East — in effect, encouraging terrorism." He continued with the soundbite of Cruz stating that "Egypt was handed over to the Muslim Brotherhood...The Muslim Brotherhood is a terrorist organization. That was profoundly harmful for U.S. national security interests."

Foreman did point out that the Brotherhood is "a group of Islamists who believe that their religion should dictate the principles of government; and it is viewed by some governments in the Middle East, including Egypt, as a terrorist group." He continued with his citation of the State Department's list of foreign terrorist group as his reasoning that Senator Cruz's statement was "false," and underlined that the Egyptian organization "never has been" on the list.

In a December 22, 2015 item for National Review Online, Steve Emerson and former Republican Rep. Pete Hoekstra, both with the Investigative Project on Terrorism, spotlighted the British government's "startling indictment of the Muslim Brotherhood" from earlier in the month. The two used Prime Minister David Cameron's statement summarizing his government's findings on the Islamist faction to attack the Obama administration for its "Alice in Wonderland view of the organization that gave us al-Qaeda, ISIS, Hamas, Islamic Jihad, al-Shabaab, and nearly every Sunni terrorist affiliate in the world."

Emerson and Hoekstra also highlighted that "within minutes of the release of the U.K. report, the Obama administration condemned it in an e-mail to the Investigative Project on Terrorism (IPT), citing the MB’s stated commitment to nonviolence and arguing that pushing back against the organization would lead to the radicalization of some of its followers."

It should also be pointed out that just over a month before the release of the U.K. government's report on the Brotherhood, Senator Cruz introduced the Muslim Brotherhood Terrorist Designation Act, which would "express a 'sense of Congress' that the group meets the [terrorist group] criteria, and have the State Department explain within 60 days whether or not it agrees," according to November 4, 2015 report by Julian Hattem of The Hill.

The transcript of the relevant portion of the Tom Foreman "reality check" segment from the March 29, 2016 edition of CNN Tonight:

DON LEMON: Well, you heard the GOP candidates at our town hall tonight in Milwaukee. Now, let's do a reality check on what they said. Here's CNN's Tom Foreman. Tom, we're ready for you. What do you have?

FOREMAN: There is no question that the administration here was happy when the longtime ruler of Egypt stepped aside — Hosni Mubarak. And yes, the Muslim Brotherhood took over for a period of time. This is a group of Islamists who believe that their religion should dictate the principles of government; and it is viewed by some governments in the Middle East, including Egypt, as a terrorist group. But the U.S. State Department has an official list of 59 foreign terrorist groups that the U.S. sees at terrorists; and the Muslim brotherhood is not on that list — never has been. Mr. Cruz wants to be the president of the United States. That's the State Department. His statement is false.